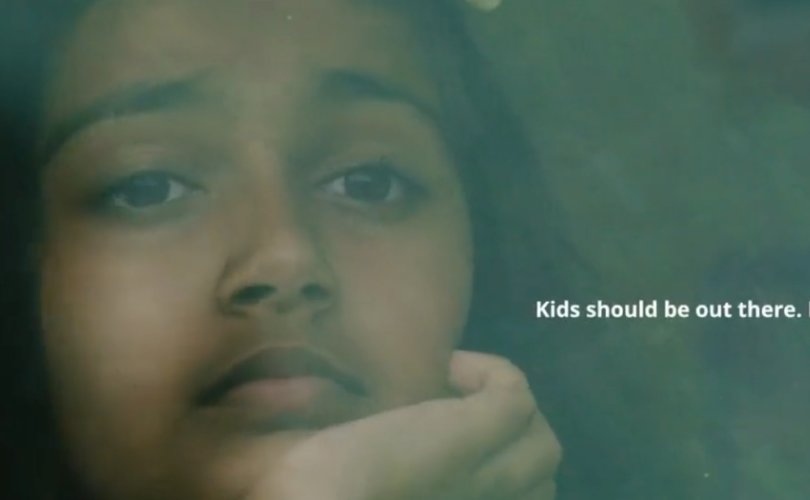 TORONTO (LifeSiteNews) – There was a public outcry after the  City of Toronto’s social media team posted an ad that suggested children who aren’t jabbed with an experimental COVID jab should be jabbed before playing with other kids.

A series of videos was uploaded on September 20 but then deleted within hours following a backlash from both the media and public.

The Toronto Sun reported that City of Toronto spokesman Brad Ross admitted that the city had made a mistake and that they can “do better.”

Ross also said that his team “missed the mark” with the videos, which he said were part of an effort to promote vaccination to groups who have “hesitancy about vaccines.” Most of the people in the ads belonged to ethnic minorities.  Meanwhile, the videos were not about vaccines in general, but COVID jabs, which have been shown to pose grave dangers for children, even resulting in death in some cases.

The video that got the most attention was a video portraying a young girl stuck inside, suggesting that she could not play outside with other kids because of her  vaccination status.

The young girl in the ad asks, “Mom, can I go outside and play with my friends?” Her mother says she cannot because “there is still something going around.”

As the girl looks longingly out the window at children enjoying their childhood, text appears on the screen that says: “Kids should be out there. Not in here.”

The words “COVID-19 vaccines available for children 6 month to 12 years”  then flash on the screen, in what was clearly an attempt by the city to suggest to the public that only children who have taken the COVID jab should mingle freely.

— Article continues below Petition —
PETITION: Demand the Conservative Party apologize for not resisting Trudeau's COVID regime
Show Petition Text
2545 have signed the petition.
Let's get to 4000!
Thank you for signing this petition!
Add your signature:
Show Petition Text

“Here’s the manipulative ad pushing vaccination on children that the City of Toronto published then deleted today,” he wrote in his first tweet of a thread wherein he posted copies of all the ads pulled down.

Here’s the manipulative ad pushing vaccination on children that the City of Toronto published then deleted today. pic.twitter.com/GbpcDYFgkZ

The next ad in the thread shows a baby in a crib being talked to through what appears to be a FaceTime call, and a grandmother states: “When can we see her? We would love to see her.”

Text then appears on the screen suggesting you could connect with infant family members “IRL” (in real life) with infant vaccination information posted on screen.

Lawton added: “This video isn’t a one-off. It’s part of a multi-part campaign. In this video, the City of Toronto suggests you should keep family members from your infant unless the infant is vaccinated.”

This video isn’t a one-off. It’s part of a multi-part campaign. In this video, the City of Toronto suggests you should keep family members from your infant unless the infant is vaccinated. pic.twitter.com/jTvCXIWqws

Another ad shows a working mother’s important virtual meeting interrupted by a child who, had she been vaccinated against COVID, would have been at school. A subsequent video shows a child studying at home alone because he is not vaccinated.

There is no requirement for children to be vaccinated against COVID to attend school in Ontario.

The final ad in the series shows a young boy on a smart phone trying to communicate with a friend but cannot due to bad connection.

In this ad, the City of Toronto concedes human connection is better than virtual connections – but of course this is only to tell you that you can get your kids vaccinated from six months of age onward. pic.twitter.com/q97nBCE98w