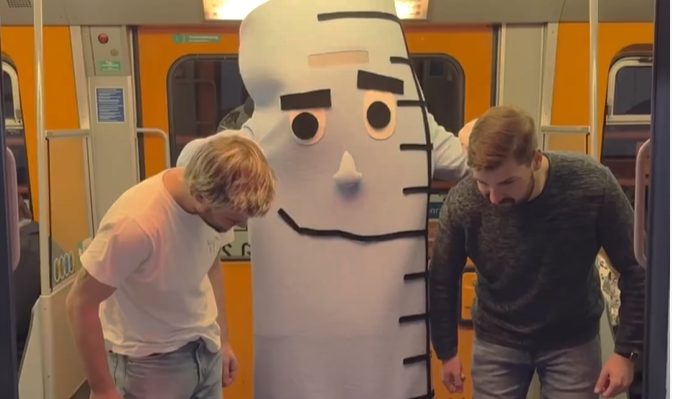 VIENNA (LifeSiteNews) — The city of Vienna published a video showing a person dressed in a giant vaccine costume assaulting two unvaccinated men and dragging them to a vaccine center to get injected.

The bizarre video is part of the city’s latest taxpayer-funded COVID jab campaign.

The clip posted on Instagram shows two men at a party who talk about how they are the only ones at that event who have not received the COVID injection and call the others vaccinated “idiots.” Then a man in a vaccine costume appears, knocks the glass of wine and the popcorn that the men are holding out of their hands, and grabs them by the ear to drag them off to a “vaccine center” to receive the COVID shots.

The video is not the only one from Vienna that shows the use of violence against the unvaccinated or people who refuse to comply with COVID rules seemingly promoted. In another video published on TikTok, the person in the giant vaccine costume assaults a man who is not wearing a mask on the subway, taking away his backpack, emptying the contents, and pulling the backpack over his head.

Vienna is the only city in Austria and one of few in Europe that still has a mask mandate on public transport.

Another video on TikTok from the same campaign shows the giant vaccine intimidating an unvaccinated woman in an office. The person in the costume appears and aggressively throws items on an office table to the ground, including the PC keyboard, then stands in front of the woman and stares at her.

The videos include a note that reads “funded by the municipal vaccination campaign,” meaning that it is paid for by taxpayers and put out by the city of Vienna.

The videos are apparently meant to be funny, which seems cynical considering that one year ago Austria became the first Western country to introduce a vaccine mandate for all citizen ages 18 or older and formally segregated unvaccinated citizens from society by introducing a “lockdown for the unvaccinated.”

The comments underneath the videos were mostly negative. Here are some of the them:

“It’s just unbelievable!!! It is a clear call for violence against the unvaccinated. If they don’t cooperate, you get to throw food in their faces, humiliate and parade them. – And this with our tax money! There will be consequences!”

“Vienna’s wet dreams of a dictatorship. Who came up with this junk?”

“Glorify physical violence … Bravo … great values that the city of Vienna conveys. … that is embarrassing”

The continued COVID jab propaganda by the city comes despite the fact that many people have become seriously injured or died after receiving the jabs. Moreover, a leading Pfizer executive has admitted before the European Parliament that its COVID injections were never tested in regard to stopping the transmission of the virus.