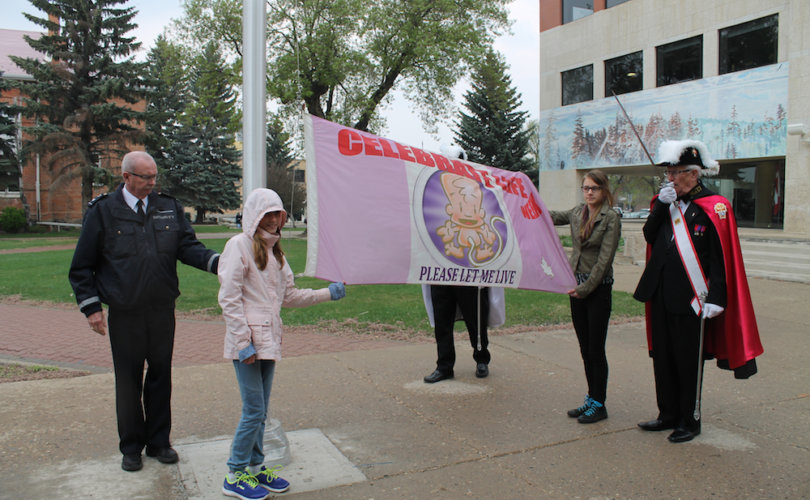 PRINCE ALBERT, Saskatchewan (LifeSiteNews) – The mayor of Prince Albert, Saskatchewan, plans to stand up for freedom of expression by flying a local pro-life group's flag in front of City Hall despite a petition from protesters that has gathered 450 signatures.

Mayor Greg Dionne told reporters the same flag that drew protests last year will fly again in May for Celebrate Life Week on a special community pole in front of City Hall. He said the flag flew for at least 10 years before that without controversy

“I strongly believe in freedom of speech and freedom of rights,” Dionne told reporters. “If you don’t like it, don’t look at it. There’s lots of things I see in the world I don’t like and I just ignore it.”

Prince Albert Right to Life has flown a flag in front of City Hall for at least 20 years. For the past 10 years, the flag has featured an image of “Umbert the Unborn,” the wisecracking pre-born child created by cartoonist Gary Cangemi. With Umberto are the captions “Please Let Me Live” and “Celebrate Life.”

“The flag represents hope,” the organization’s president, Dorothy Kawula, told LifeSiteNews last year. “It’s a very positive message, not an attack on anyone.”

However, as far as petition organizer Lana Wilson is concerned, that message is political. She told City Council last month, “The display of pro-life imagery is intended to support the attempt to re-criminalize abortion in Canada.”

The Council voted 9-3 to let Mayor Dionne decide the issue, knowing, Councillor Don Cody told LifeSiteNews, his strong pro-free speech views. Now there is a petition on change.ca calling on council to reject the flag and Cody said suspects the petition will meet the same fate.

Last year’s petition contained names from Toronto and other places across Canada, said Cody. “I don’t know why they think we would look to Ontario to make our decisions for us.”

The petition argues that “City council must not, and cannot, according to the city's own flag policy, approve the proclamations and fly the flags of groups that are controversial, promote intolerance, are divisive to the community, and most importantly, discriminatory.”

It added that any attempt to “restrict abortion is discrimination against us — women, transmen and gender diverse persons.” “Transmen” and “gender diverse” persons are women who present themselves and having a different gender identity but can still get pregnant and, therefore, can still want an abortion.

News of the dispute made it into the British Independent newspaper under the headline, “Canadian city council's plan to fly anti-abortion flag causes widespread outrage.” But the only evidence of “widespread outrage” was the petition, which then had 300 signatures out of a population of 42,000.

Colette Stang of Saskatchewan Pro-Life said, “I commend them in Prince Albert for keeping up the fight and defending their rights. I believe they have every right to fly the flag.” As for city council, “I think they made the right decision,” she told LifeSiteNews.

Valerie Hettrick of Prince Albert Right to Life told LifeSiteNews, “There are two things happening here that are getting missed. The first is the unborn child. Our opponents don’t ever want to admit the unborn child is a person. The second thing is that they talk about our flag discriminating against women. But more than half the unborn children being aborted in Canada are girls. So isn’t that discriminatory?”