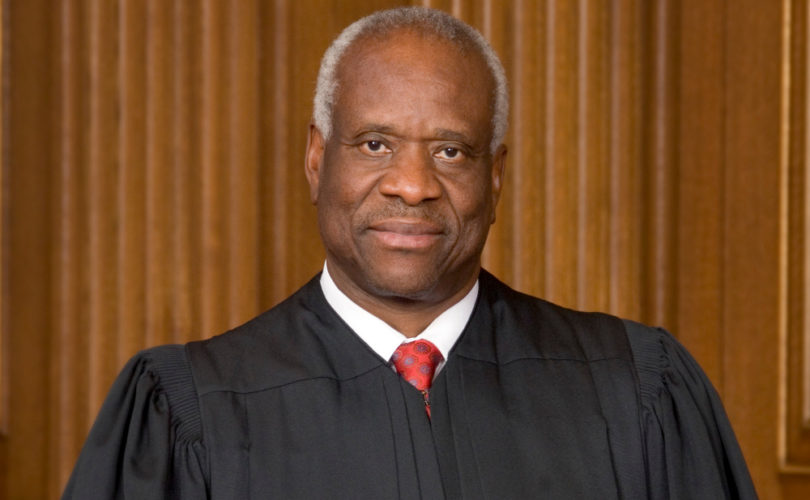 WASHINGTON, D.C., May 28, 2019 (LifeSiteNews) – With the U.S. Supreme Court’s decision Tuesday morning to save one part of Indiana’s 2016 abortion law while letting another be struck down, Justice Clarence Thomas took the opportunity to explain how the law highlights abortion-on-demand’s deep ties to the American eugenics movement, which he said the nation’s highest court has a duty to eventually confront.

The 2016 law banned abortions sought specifically because of a preborn baby’s race, sex, ethnicity, or potential disabilities, and required abortionists to bury or cremate fetal remains rather than treating them as medical waste. On Tuesday morning, the Court issued an order reversing the Seventh Circuit’s decision to invalidate the fetal burial provision, while declining to reverse its judgment against the provision banning discriminatory abortions.

“This Court has already acknowledged that a State has a ‘legitimate interest in proper disposal of fetal remains,’” and the “Seventh Circuit clearly erred in failing to recognize that interest as a permissible basis for Indiana’s disposition law,” the order explained. Meanwhile, it “expresses no view on the merits of” whether Indiana “may prohibit the knowing provision of sex-, race-, and disability-selective abortions by abortion providers,” but declined to take up the matter until additional appeals courts take up such laws.

The order was unsigned, meaning only the positions of justices who chose to comment are known. Left-wing Justices Ruth Bader Ginsburg and Sonia Sotomayor noted they would have also ruled against Indiana on the fetal burial provision.

The conservative Clarence Thomas issued a lengthy concurring opinion explaining that such pro-life laws “promote a State’s compelling interest in preventing abortion from becoming a tool of modern-day eugenics.”

“The use of abortion to achieve eugenic goals is not merely hypothetical,” he argued, going on to detail how the “foundations for legalizing abortion in America were laid during the early 20th-century birth control movement,” which “developed alongside the American eugenics movement.”

“As a means of reducing the ‘ever increasing, unceasingly spawning class of human beings who never should have been born at all,’ [Planned Parenthood founder Margaret] Sanger argued that ‘Birth Control…is really the greatest and most truly eugenic method’ of ‘human generation,’” Thomas wrote. “In her view, birth control had been ‘accepted by the most clear thinking and far seeing of the Eugenists themselves as the most constructive and necessary of the means to racial health.’”

“Sanger herself campaigned for birth control in black communities,” Thomas detailed. “In 1930, she opened a birth-control clinic in Harlem…Then, in 1939, Sanger initiated the ‘Negro  Project,’ an effort to promote birth control in poor, Southern black communities….In a report titled ‘Birth Control and the Negro,’ Sanger and her coauthors identified blacks as ‘the great problem of the South’—the group with ‘the greatest economic, health, and social problems.’”

Thomas noted that, while Sanger herself didn’t actually support abortion (she saw contraception as a way to “put an end to the horrors of abortion and infanticide”), the fact remains that her “arguments about the eugenic value of birth control in securing ‘the elimination of the unfit’…apply with even greater force to abortion, making it significantly more effective as a tool of eugenics,” because while “birth control could prevent ‘unfit’ people from reproducing, abortion can prevent them from being born in the first place.”

“Abortion advocates were sometimes candid about abortion’s eugenic possibilities,” Thomas wrote, quoting Planned Parenthood president Alan Guttmacher as writing in 1959 that the “quality of the parents must be taken into account,” including “[f]eeble-mindedness.” The question of abortion’s permissibility should be “separated from emotional, moral and religious concepts,” Guttmacher argued, and “must have as its focus normal, healthy infants born into homes peopled with parents who have healthy bodies and minds.”

“Enshrining a constitutional right to an abortion based solely on the race, sex, or disability of an unborn child, as Planned Parenthood advocates, would constitutionalize the views of the 20th-century eugenics movement,” Thomas warned, a stark contrast to the Supreme Court’s “zealous” defense of the “rights of people even potentially subjected to race, sex, and disability discrimination” in cases unrelated to abortion.

“Although the Court declines to wade into these issues today, we cannot avoid them forever,” Thomas concluded. “Having created the constitutional right to an abortion, this Court is dutybound to address its scope.”