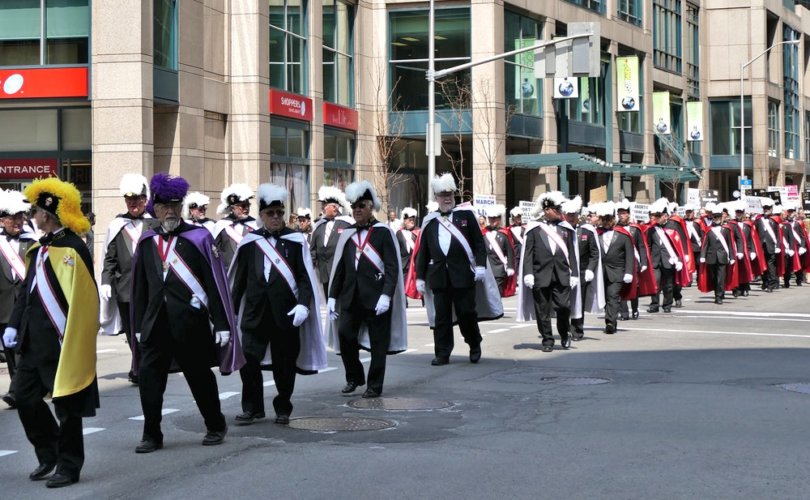 Knights of Columbus at the 2016 March for Life in Ottawa, Canada. LifeSiteNews

Update February 5, 2018: This report has been updated to include comment from The Knights of Columbus of Alberta and the Northwest Territories.

TORONTO, January 29, 2018 (LifeSiteNews) — The Knights of Columbus of Ontario, Alberta, and the Northwest Territories are backing Canada’s Catholic bishops in opposing the Liberal government’s ban of pro-life and pro-family groups from receiving summer job grants. It is urging its members to “speak out in opposition” against the policy, calling it “discrimination.”

“Our Bishops have spoken,” wrote Dan Heffernan, state deputy for the Knights of Columbus of Ontario in a January 24 memo.

“Therefore, it has been decided that it is not possible for Knights of Columbus Councils and related organizations to sign this attestation provision in its current form,” he stated. “As the ‘strong right arm of the Church’, it is our duty to uphold our Bishops and Clergy.”

“As the Ontario State Deputy of the Knights of Columbus, I urge every Brother Knight to stand together and speak out in opposition to this policy,” Heffernan wrote.

The Knights of Columbus of Alberta and the Northwest Territories are also backing the bishops “100 percent,” saying that they fully endorse the statement by the Ontario Knights.

“On behalf of the 18,800 Knights of Columbus and their families in Alberta/NWT let me make this perfectly clear: We are there to support our bishops and clergy when it comes to abortion issues,” state deputy Ron Schuster wrote in a statement to LifeSiteNews.

“Our Prime Minister is sadly mistaken claiming that access to abortion is a Charter Right,” added Schuster, who called on Knights “throughout Canada” to “revisit the unified efforts to secure legal protection for children in the womb.”

The bishops have joined other religious leaders in condemning the Liberal policy as a discriminatory, ideological test that violates their Charter rights, and assert they cannot in conscience sign the attestation.

The Canadian Conference of Catholic Bishops collectively denounced the new rule, several bishops released their own statements, and Toronto’s Cardinal Thomas Collins was among 87 religious leaders who last week signed a letter asking the Liberals to nix the attestation.

And Ottawa’s Archbishop Terrence Pendergast slammed Trudeau in an Ottawa Sun editorial, saying it was “logically impossible” for the prime minister to consider himself both Catholic and pro-abortion.

The Knights of Columbus is a Catholic men’s organization founded in Connecticut in 1882 by Fr Michael McGivney for “men of faith and men of charitable action,” its website states. In Ontario, there are over 500 Knights of Columbus councils and some 57,000 members.

“As a Catholic Fraternal organization, we defend the right to life of all human beings from the moment of conception to natural death,” Heffernan wrote.

“These beliefs are based on science, which proves that human life begins at the moment of conception, and supported by the teachings of the Catholic Church, which believes that all human beings deserve equal respect, as formed in the image and likeness of God,” he stated.

Trudeau’s government is “clearly discriminating against organizations that hold to the fundamental truth concerning the sanctity of human life. It is in effect saying: ‘faithful Catholics need not apply’,” Heffernan pointed out.

“We urge you, as Canadian citizens, not to be silent about this discrimination.”

Trudeau, as did his father Pierre Elliott Trudeau before him, says he’s Catholic, but is arguably Canada’s most pro-abortion prime minister to date.

As Liberal leader, Trudeau forbade anyone who didn’t support abortion from running as a candidate for the Liberal Party. As prime minister, he has made access to “safe and legal abortion” the core of Canada’s foreign and domestic policy, including spending $650 million to promote abortion in developing nations, and has referred to abortion as a Charter “right.”

The Trudeau Liberals entrenched the controversial gender theory ideology in law in June 2017 with Bill C-16, and legalized euthanasia in June 2016 following a Supreme Court decision striking down the prohibition against it.

Trudeau also banned pro-life and pro-family projects and activities from receiving funds under the Canadian Service Corp, the Liberals’ revamped federal youth volunteer program. The Liberals are spending $105 million over the next three years on the service corp.

The prime minister has dismissed the summer job controversy as a “kerfuffle” and said Canadians are free to oppose abortion but the Liberals “draw the line” at them acting on that conviction.

Liberal Employment Minister Patty Hajdu has since tried to smooth over the controversy by publishing “supplementary information” on the ministry website last week.

But the bishops and other religious leaders rejected this as insufficient because the requirement to sign the attestation remains.

Hajdu has so far remained adamant she won’t remove or alter the attestation, which she says she brought in to stop pro-life and pro-family groups from receiving job grants, after hearing complaints about this last year.

The Toronto archdiocese is asking parishes to urge Catholics to write their Members of Parliament to protest the attestation. The Archdiocese has provided sample letters here.

The Evangelical Fellowship of Canada is also asking members to write MPs, as is the Canadian Council of Christian Charities. It is advising its members to send in a paper application with an alternative attestation.

Meanwhile, Toronto Right to Life has taken the Liberal government to court, asking that the attestation be quashed as unconstitutional.

The Liberals increased the Canada Summer Jobs revenues by $113 million annually last year, bringing its annual budget to $241 million to fund 70,000 summer job placements across the country for students from ages 15 to 30.

The deadline for applications to Canada Summer Jobs is February 2.