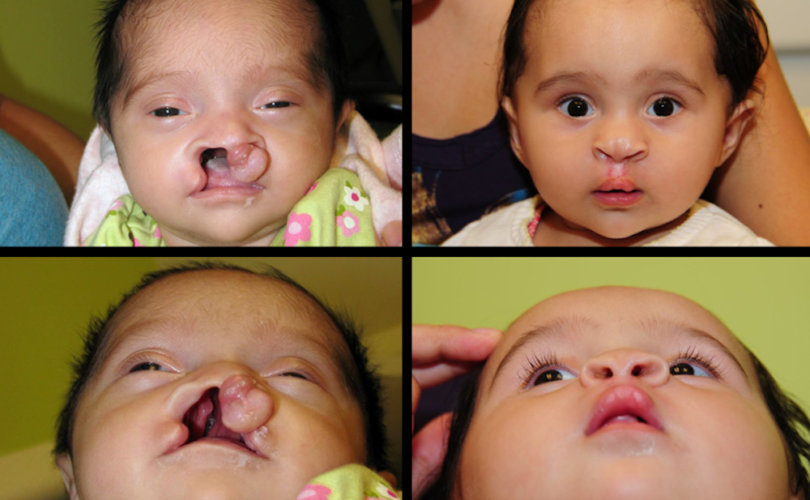 LONDON, England, August 30, 2016 (LifeSiteNews) — The number of British babies with cleft palates has tripled in just four years as would-be parents rely on ultrasound scans to get advance warning of health problems.

New government data indicate only four unborn babies were aborted in 2011 because they had cleft palates, but 11 were killed in the womb for the same reason in 2015.

Pro-life parliamentarian Lord David Alton said, “Aborting a baby with a cleft palate should be unconscionable. For the law to allow this up to birth should be unthinkable.”

Added MP Fiona Bruce, chair of the All-Party Parliamentary Pro-Life Group: “It is deeply disturbing if these figures reflect a worrying trend in society to disproportionately value the physically perfect and beautiful.”

But there is more at work here than parental reluctance to bear children with cleft palates. The Cleft Lip and Palate Association, a firm opponent of aborting unborn children with this condition, nonetheless details on its website many kinds of surgery a child might need before his or her first year to correct the condition, as well as speech therapy and other treatment for hearing problems for years thereafter.

CLAPA began offering funding in 2003 to encourage parents to bear their children with cleft lips or palates, and executive director Gareth Davies said at the time, “We do not consider a cleft to be a major disability. We believe that if the general public had a greater knowledge of the condition, the option of termination might not be considered.”

Because the number of abortions in the United Kingdom annually approach 200,000, some consider the increase in cleft palate abortions insignificant. In commenting on the Daily Mail story, “David” of Reading said, “There are over 190,000 abortions a year. Statistically speaking, the change of four a year to 11 a year over four years, for a group of this size, is completely meaningless.”

However, the numbers for cleft palate abortions is the tip of a grimmer iceberg representing thousands of babies aborted because of disabilities, especially those with Down syndrome. As the Daily Mail reports, “It is thought that increased access to tests that diagnose the condition in the womb are behind a rise in the number of parents choosing to end pregnancies.”

There is also a legal question. In 2003, Anglican priest Joanna Jepson tried but failed to get the Crown to prosecute a doctor who aborted an unborn child with a cleft palate in its 28th week. This month, she told reporters, “Abortion for cleft palate is an abuse of the Abortion Act.”

The legislation allows abortions after 24 weeks for babies with “a serious handicap.” In the wake of the newest numbers, Health Minister Jane Ellison acknowledges that the term needs a better definition.