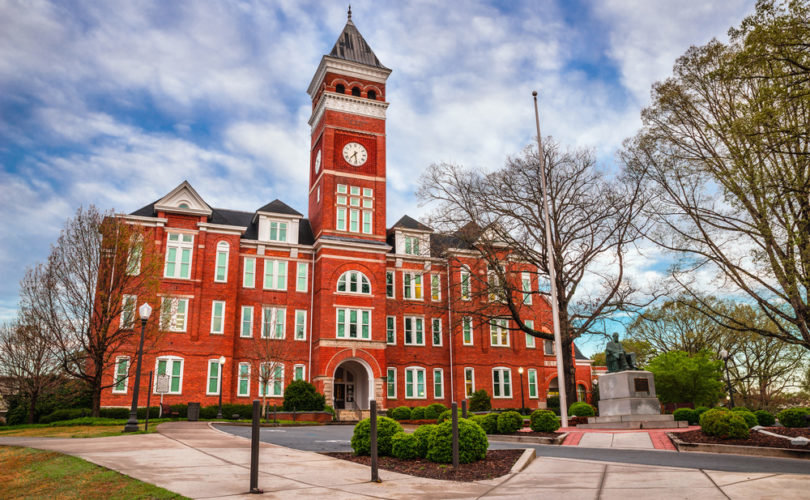 Swinney was set to receive the “South Carolina Family Champion of 2015” award from the Palmetto Family Council on Tuesday night, but the Gay and Lesbian Alliance Against Defamation (GLAAD) protested.

“Coach Swinney has an obligation to the players he leads and all students that attend Clemson to use his considerable profile to promote causes that bring us together, not tear us apart,” GLAAD's Zeke Stokes said in a statement.

The Sporting News quoted Stokes as saying, “The Palmetto Family Council’s values are out of line with the values of love and acceptance for all people, and I hope the Coach will reconsider the message that his alignment with them sends.”

South Carolina House Minority Leader Todd Rutherford, a Democrat and proponent of redefining marriage, also urged Swinney to withdraw from the event. He depicted the Palmetto Family Council's opposition to same-sex marriage as “openly discriminatory and politically motivated,” and he characterized Coach Swinney's presence at the organization's event as “highly inappropriate.”

Swinney responded by distancing himself from the pro-family organization. “I have no association [with the Palmetto Family Council] as their 'South Carolina Family Champion of 2015,'” Swinney explained. “My scheduled participation in this event has been perceived incorrectly as an endorsement of certain viewpoints and has entered the political arena.”

Swinney concluded, “In order to avoid a distraction for the team and the entire football program, I've decided it is in the best interests of all involved that I not attend the event.”

State Rep. Rutherford was quick to praise Swinney's decision, calling it “a testament to his character as an individual and coach.”

Rutherford then encouraged all in his state to “stand up” against pro-family organizations.

“This is a sign of the significant progress the state of South Carolina has made with respect to tolerance and equal rights. I hope others follow Coach Swinney's lead in standing up to groups like the Palmetto Family Council who seek to make discrimination legal and acceptable,” he said.

Meanwhile, six state lawmakers signed a letter expressing their “deep and profound disappointment” with Swinney's canceling the pro-family speech, and wrote that he has given “the opponents of traditional family values in South Carolina a huge and undeserved victory.”

The state representatives concluded their letter by asking Swinney, “Where do you stand, Coach?”

Reise Boyd III, chairman of the Palmetto Family Council board of directors, released a statement declaring that the organization and Swinney's appearance at the event have been falsely characterized by detractors.

Palmetto Family Council president Dr. Oran Smith explained, “What we have here is…political correctness.” He shared in an interview on American Family Radio's “Washington Watch” that, in today's society, intolerance is promoted in the name of tolerance. There are certain positions that you're allowed to take in a democratic society; and then for some reason there are other positions that you're not allowed to take.”

Smith concluded, “Our past support for one man-one woman marriage in South Carolina somehow makes us toxic.”

Boyd remarked, “It is a strange twist of irony that our opponents have unwittingly made our point, that the religious freedoms and liberties of all South Carolinians are under attack.”