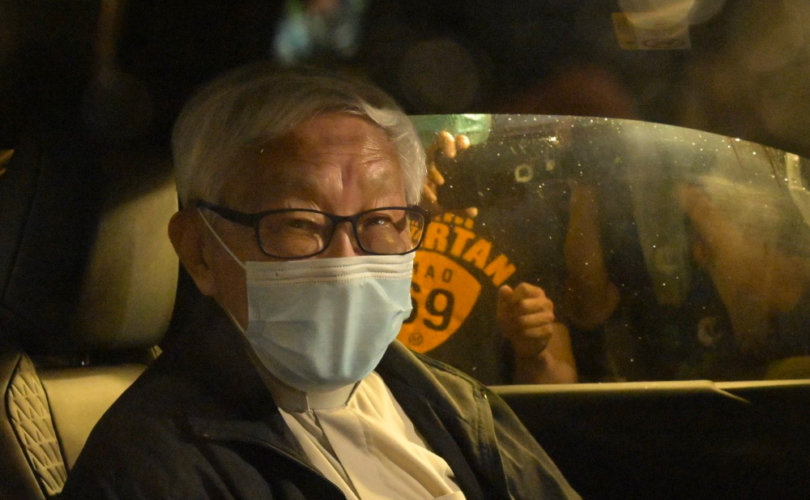 Cardinal Joseph Zen after he was released on bail, May 11, 2022Kris Cheng/Twitter

HONG KONG (LifeSiteNews) – The arrest of Cardinal Joseph Zen on May 11 has caused outrage around the world, as Catholic leaders and politicians alike have condemned the act and called on the Vatican to reject its secretive deal with China.

90-year-old Cardinal Joseph Zen, the Bishop Emeritus of Hong Kong, was arrested by Hong Kong police May 11, before being released on bail some hours later. He was accused of “allegedly colluding with foreign forces” for his role as a trustee of the 612 Humanitarian Relief Fund.

Along with the cardinal, the authorities also arrested the other four trustees of the Fund: the prominent former opposition legislator Margaret Ng Ngoi-yee, the singer Denise Ho Wan-sze, Xu Baoqiang, and Cyd Ho Sau-lan, who was already in jail but re-arrested.

The Fund was established to offer “legal, medical, psychological and emergency financial assistance” to those involved in the 2019 protests against the government’s Extradition Law Amendment Bill, which would allow prisoners to be transferred to China for trial.

Chinese authorities justified the arrests, saying that the five trustees were accused of “imposing sanctions on the Hong Kong Special Administrative Region (and) endangering national security.”

READ: UPDATE: Cardinal Zen released on bail after being arrested for ‘allegedly colluding with foreign forces’

The Holy See Press Office director Matteo Bruni issued a statement May 11, writing: “The Holy See has learned with concern the news of Cardinal Zen’s arrest and is following the evolution of the situation with extreme attention.”

The Diocese of Hong Kong issued a similarly worded statement later, saying the diocese “is extremely concerned about the condition and safety of Cardinal Joseph Zen and we are offering our special prayers for him.”

We have always upheld the rule of law. We trust that in the future we will continue enjoying religious freedom in Hong Kong under the Basic Law.

We urge the Hong Kong Police and the judicial authorities to handle Cardinal Zen’s case in accordance with justice, taking into consideration our concrete human situation.

As Christians, it is our firm belief that: “The LORD is my shepherd; there is nothing I lack.” (Ps.23:1)

Thank you Bishop Tobin and others for your support of Cardinal Zen….let us pray that all bishops,priests, deacons and faithful join us in prayer and call for Justice for Cardinal Zen. https://t.co/IKkdWTGxn4

Pray for Cardinal Joseph Zen, 90 years of age, who has been unjustly arrested by the Chinese Communists, and for all those in the world who suffer for their Catholic Faith. Though separated by distance, we stand in complete solidarity with today’s heroes and martyrs.

U.K. Deacon Nick Donnelly of Lancaster, a prominent campaigner for justice for the wrongly imprisoned Cardinal George Pell, noted that Cardinal Zen had “joined a holy order of white martyrs – the cardinal victims of communism, including a beatus.”

Cardinal Zen has joined a holy order of white martyrs — the cardinal victims of communism, including a beatus

Photo of Cardinal Zen, recipient of the Truman–Reagan Medal of Freedom during the Victims of Communism Memorial Foundation’s ceremony in his honor pic.twitter.com/25q5TG8W33

Politicians and journalists join in condemnation

Lord Alton, a patron of U.K.-based Hong Kong Watch, called for international action in response to the arrests, saying the “international community … must accompany rhetoric with action to signal that Beijing will no longer be allowed to act with impunity and get away with such egregious injustice without consequence.”

Meanwhile Benedict Rogers, co-founder and chief executive of Hong Kong Watch, wrote in the Catholic Herald that Zen’s arrest marked a “new low for a Chinese Communist Party regime that had already sunk to shocking levels of inhumanity, barbarity, cruelty and mendacity.”

The Hill reported that White House deputy press secretary Karine Jean-Pierre called on Chinese authorities to “immediately release those who have been unjustly detained and charged, like the Cardinal Joseph Zen … and others arrested today.”

Australia’s ambassador to the Holy See called upon Hong Kong “respect the rights and freedoms” of international law, while former U.S. Secretary of State under President Donald Trump, Mike Pompeo, accused the Chinese Communist Party (CCP) of “crushing faith and conscience,” holding Zen up as “the example all religious leaders should aspire to – including Pope Francis.”

Also in the U.K., Fiona Bruce MP – the Prime Minister’s Special Envoy for Freedom of Religion or Belief – wrote she was “deeply concerned” that a “leading advocate for human rights and senior leader of the Catholic Church in Asia” had been arrested. She was supported by government minster James Cleverly, who spoke of the government’s opposition to Hong Kong’s national security law, which is “being used to curtail freedom, punish dissent, and shrink the space for opposition free press and civil society.”

Her U.S. counterpart, Rashad Hussain, demanded the charges against Zen and the other trustees be dropped immediately. “He is a remarkable leader of communities in Hong Kong & the Catholic Church. He’s lived his life inspired by his faith & a commitment to freedom.”

Slovakian Member of the European Parliament Miriam Lexmann wrote she was “disgusted” by the arrest of “brave & peace-loving 90 year-old Cardinal Zen & trustees of the 612 Humanitarian Relief Fund.” She called for “consequences” for the Hong Kong and Chinese officials over “their terror against the people of #HongKong.”

The arrest of all the 612 Fund trustees, particularly Cardinal Zen, has also drawn strong criticism from journalists, especially those living in, or reporting on Hong Kong affairs. China expert Steven Mosher queried whether Pope Francis would “finally speak out against the persecution of Catholics in China” in light of Zen’s arrest.

Vatican’s response in the spotlight

The cardinal’s arrest now places increased scrutiny on the Vatican and Pope Francis, as the secretive deal he made with Beijing is up for its second renewal in the fall. Zen has been a vocal critic of the deal, accusing Francis of “encouraging a schism” and “selling out the Catholic Church in China” and styled the deal “an incredible betrayal.”

Earlier this year, the Vatican’s top ranking officials in both Taiwan and Hong Kong were removed within weeks of each other and have yet to be replaced, prompting Hong Kong Watch’s Benedict Rogers to speculate that the Vatican could be looking to strengthen ties with China.

In light of Zen’s arrest, Rogers has joined a number of Catholics in calling for Francis to end the deal and take a stance against China:

the time has come for Catholics everywhere to make this point to the Vatican. Write to the Secretariat of State and make your views on Rome’s dodgy deal with the Chinese Communist Party known. Call on the Holy Father to speak out. Demand an end to the policy of appeasement which Rome has adopted towards one of the world’s most repressive, brutal, genocidal regimes. And pray for the Church in China and Hong Kong.