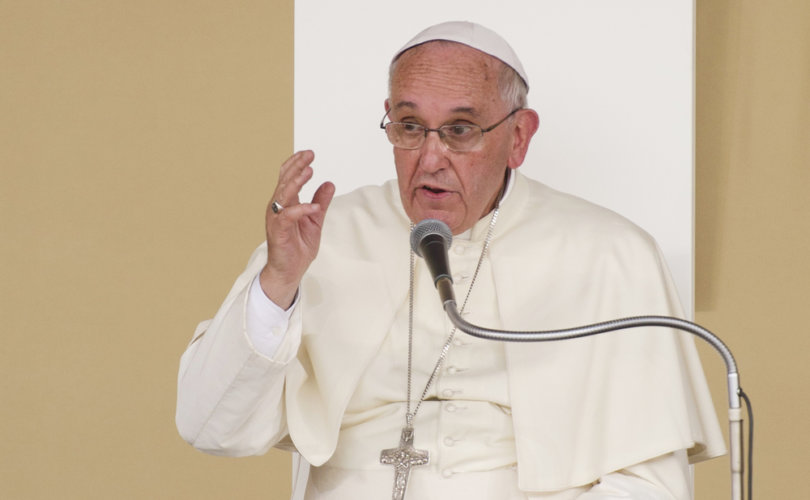 ROME, July 27, 2017 (LifeSiteNews) — The “main obstacle” Pope Francis faces in implementing his agenda for the Church comes from “closure, if not hostility” from “a good part of the clergy, at levels both high and low,” stated an article in the Vatican’s semi-official newspaper L'Osservatore Romano on the weekend.

Giulio Cirignano, an Italian priest and Scripture scholar at the Theological Faculty of Central Italy, accused all levels of clergy — priests, bishops, and cardinals — of opposing the Pope’s agenda because of being attached to traditional ways of thinking and practices.

“The main obstacle that stands in the way of the conversion that Pope Francis wants to bring to the Church is constituted, in some measure, by the attitude of a good part of the clergy, at levels high and low … an attitude, at times, of closure if not hostility,” he said.

Cirignano argued that average pew-sitters, not the clergy, are the ones who are recognizing that now is the “favorable moment” for the “conversion” of the Church championed by Pope Francis.

“Most of the faithful have understood, despite everything, the favorable moment, the Kairos, which the Lord is giving to his community. For the most part, they’re celebrating,” he said.

“Despite that, the portion [of the community] closest to little-illuminated pastors is maintained behind an old horizon, the horizon of habitual practices, of language out of fashion, of repetitive thinking without vitality,” he said.

Cirignano outlined several factors that he said explains why much of the clergy is not behind the Pope’s agenda for the Church. This includes, he said, many having a “modest culture level,” an unacceptable image of what it means to be a priest, and theological confusion when it comes to God and religion.

Many clergy who oppose Pope Francis, he said, operate from an old theology, associated with the Counter-Reformation. Such a theology, he said, is “without a soul.” It is responsible for transforming the “impassioned and mysterious adventure of believing” into “religion” that does not reach the level of a real “faith.”

Cirignano said that such “religion” produces a “hypothetical god” which is “for the most part, man's projection of his mind.”

“Religion arises from fear and human needs…It, however, has this major limitation: the God of religion is, for the most part, man's projection of his mind, his fears, his needs. It is a hypothetical god.”

“When the priest is too marked by a religious mentality, and too little by a limpid faith, then everything becomes more complicated,” he said, adding: “He risks remaining the victim of many things invented by man about God and his will.”

The word “religion” comes from a Latin word which means “to bind.” By the virtue of religion, Catholics bind themselves to the truths of the faith, especially as expressed by the early creeds of the Church (Apostles’ and Nicene), which are still recited today. The Catechism of the Catholic Church teaches the necessity of such formal statements of the Catholic religion since they help the one who professes them to “attain and deepen the faith of all times.”

Since his election in 2013, Pope Francis has pushed a vision of the Church where pastoral practices sometimes conflict with perennial Catholic teaching and where hard cases become the exception to the rule.

His ambiguous teachings, especially those in his controversial 2016 Exhortation Amoris Laetitia, have caused bishops and cardinals to interpret his words in ways that have led to contradictory pastoral practices.

Those who have asked the Pope for clarification, such as the four cardinals (one of whom is now deceased) as well as numerous Catholic theologians and scholars, have been ignored.