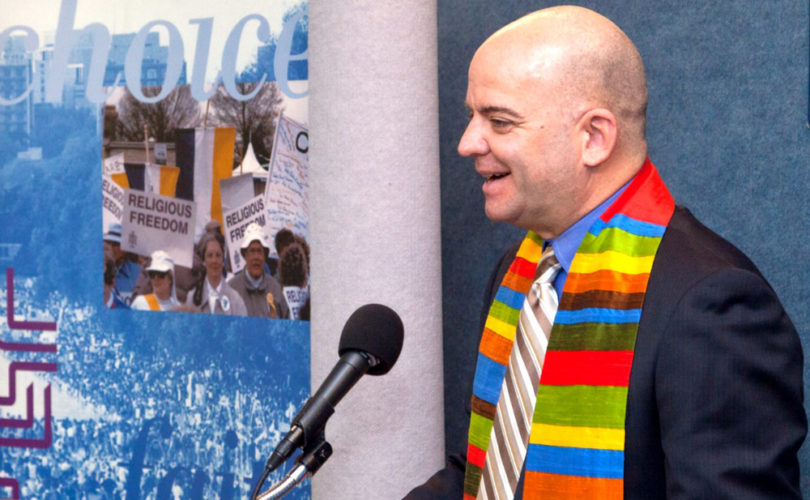 Clergy should consider support for abortion and birth control moral imperatives, says a former Obama advisor who once accused Pope Benedict XVI of running a “discredited army of oppression.”

In a Washington Post op-ed published on Tuesday, defrocked Methodist minister Harry Knox and co-author Rev. Alethea Smith-Withers wrote that their faith “is what compels us today to speak out for access to comprehensive sexuality education in schools.”

“For too long, the shouting of a few strident voices has closed off the space for nuanced and empathetic conversation,” the pair maintains.

“There is no monolithic religious opinion about contraception, abortion or sex education,” they continue. “Decisions about reproduction are morally complex. And clergy do not always use Bible verses as political weapons — a misrepresentation too often promoted in the media. The wisdom found in our faith traditions is rich, nuanced and rarely absolute. Here is the good news: Most people of faith in the United States support access to compassionate abortion care.”

Knox, who is the president and CEO of the Religious Coalition for Reproductive Choice and previously served as director of the Human Rights Campaign’s religion and faith program, has long been a controversial voice when it comes to religious liberty.

In 2009, he was heavily criticized by nearly two dozen national Catholic voices after saying the Knights of Columbus were Pope Benedict XVI's “foot soldiers” in a “discredited army of oppression.” He called the pope a “discredited leader,” and said he was “morally reprehensible” for not supporting condom use.

In 2007, Knox said that a bishop's decision to not provide Communion to an activist lesbian couple was “immoral and insulting to Jesus.”

According to the op-ed, religious liberty includes taxpayer-funded abortions, and a woman's “health insurance should honor the full spectrum of care that she might need, including abortion.”

The op-ed also describes legislative and legal opposition to abortion as a form of “impos[ing]…religious beliefs on others.”