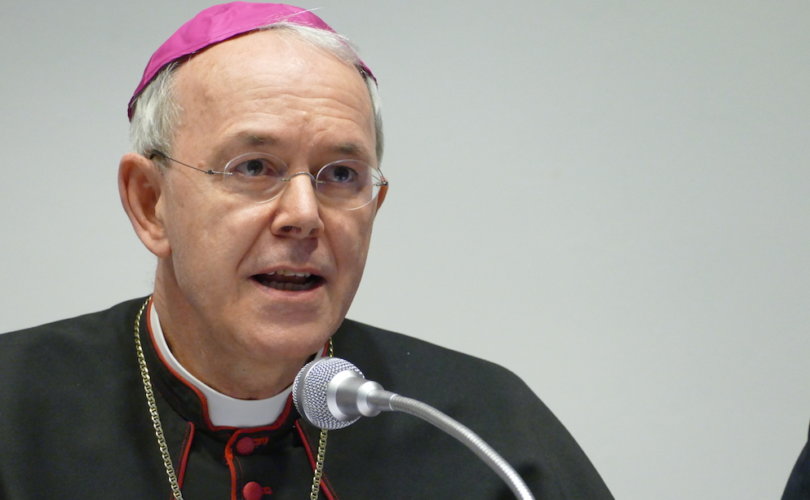 DUBLIN, Ireland, September 4, 2018 (LifeSiteNews) – “The Christian family is facing a new Goliath in the ideology of homosexuality and gender,” Bishop Athanasius Schneider, auxiliary bishop of Astana in Kazakhstan said in a recent talk.

“And unfortunately,” he added, “some in the ranks of the clergy became activists and promoters of so-called LGBT ideology, which is, in reality, a kind of apostasy from the Christian faith.”

Schneider made his comments in a video address to the Conference of Catholic Families (COCF) which took place in Dublin, Ireland, last month. He lauded those present for proclaiming the truth about marriage and family.

The COCF “has meritorious courage to resist the totalitarian and worldwide gender ideology,” he said, in contrast to “other Catholic family meetings, which have surrendered themselves to this ideology or willfully accepted it.”

“Such surrender to the gender ideology and its acceptance constitutes ultimately a betrayal of Christ,” Schneider stated, “an apostasy from the integral and divinely revealed Catholic and apostolic faith.”

Schneider was one of several Catholic presenters who addressed the COCF, an alternative orthodox event running concurrent to the Vatican-run LGBT-affirming World Meeting of Families (WMOF).

“We live in a time in which one of the most beautiful creations of God – namely marriage and family- are under general attack on the side of the neo-Marxist dictatorship which disguises and masks itself with the artificial and bizarre name of LGBT,” said Schneider, “which has gained almost universal power in the media.”

It was puzzling and sad, he said, that collaborators with this general attack on marriage and family could be found “even in the ranks of the clergy.”

Along with the ongoing revelations in the Church’s sexual abuse crisis, the WMOF was overshadowed by concern that pro-LGBT Father James Martin was one of the keynotes.

Martin, a Vatican advisor and editor-at-large for Jesuit-run American magazine, continually preaches an LGBT-affirming message. He told WMOF participants who traveled to Dublin for the Vatican’s family event that active homosexuals “should be invited into parish ministries.”

“But right now,” Schneider said, “we are called to be faithful to the unchangeable truths of our Catholic and apostolic faith which our fathers and forefathers had transmitted to us. We have a chance to be courageous witnesses of the divine truth and of the beauty of marriage and family.”

Despite being smaller than the Vatican-backed meeting and lacking “the sympathy of the powerful of this world” and sometimes even from the official structures of the Church, Schneider told the Conference of Catholic Families, “You are powerful in the eyes of God and of eternity” because “you have the true and undistorted faith.”

“You can say to the others you have the money and all the administrative and organizational structures you have the applause of the anti-Christian world,” he added. “We, however, we have the faith, and that matters.”

True Catholic families – and fittingly, large families – will strengthen the troubled Church of today with the beauty of the Catholic Faith, the bishop said.

“From that faith will come out new Catholic fathers and mothers,” said Schneider, “and from them there will come out a new generation of zealous priests and intrepid bishops, who will be ready to give their life for Christ and for the salvation of the souls.”

“Indeed,” said Bishop Schneider, “what the current world and the Church mostly need, are true Catholic families, the original places of the beauty of the Catholic Faith.”

“Let us look with the eyes of faith and with the gift of our reason and common sense to the beauty of the divine created author of marriage and family,” he said.

Remaining faithful to the vocation of being a Catholic family

Schneider went on to quote the statements of several popes and others, to illustrate that “the family and the entire human society will flourish only on the condition that the divine truth on marriage and family will be observed.”

There are families, young people, priests and bishops who are marginalized and ridiculed for their fidelity to the integrity of the Catholic faith and of the divine worship according to the tradition of our forefathers, said Bishop Schneider.

The key to the Catholic family remaining faithful to its vocation, he said, is faithfully practicing daily common prayer.

“My dear brothers and sisters, the first and most holy goal and end of holy matrimony and family consists in giving birth to new citizens of Heaven and to educate them in the Catholic faith,” he said.

“The family is, therefore, the first and original place where the integrity and the beauty of the Catholic faith should be taught to the children and by this way handed over to future generations,” he added.

Schneider emphasized the crucial nature of catechetical instruction in spreading the glory of God and to secure the salvation of souls.

One of the main causes of the moral, spiritual and religious crisis of the current time, he said, exists in religious ignorance, ignoring the truth of the faith, and an erroneous knowledge of the faith.

Also among the bishop’s key points were how Christian families must be new crusaders in spreading and defending the true Catholic faith, the importance of the Church’s tradition, and how the spiritual health of a nation depends on this transmission of the faith.