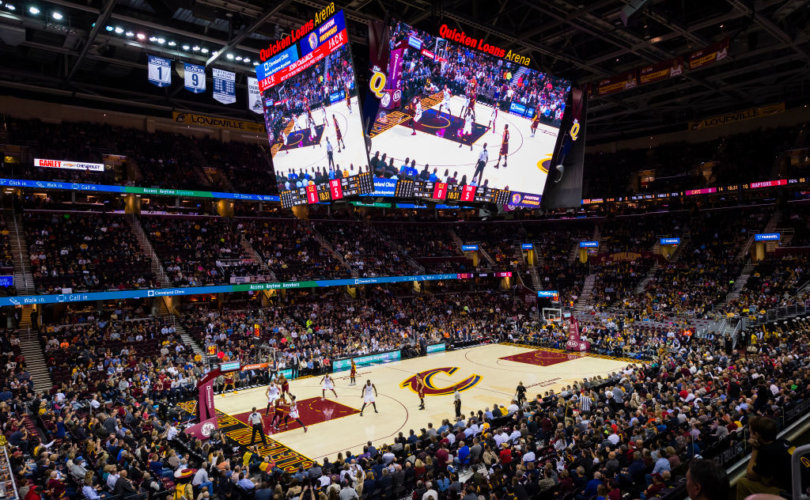 CLEVELAND, OH - NOVEMBER 15: A general stadium view during Cleveland Cavaliers players introductions prior to the game against the Toronto Raptors at Quicken Loans Arena on November 15, 2016 in Cleveland, Ohio.Jason Miller/Getty Images

CLEVELAND (LifeSiteNews) – Several Ohio companies have announced that they will pay the travel expenses of employees seeking an abortion after the Supreme Court ruled in Dobbs v. Jackson Women’s Health last Friday.

The announcements come as a result of the heartbeat law in Ohio that bans abortions in the state at around six weeks of pregnancy. Among the companies that have announced that they will pay for travel expenses for abortion are Kroger, Giant Eagle, and the Cleveland Cavaliers.

Kroger, a Cincinnati-based retail company, announced last week that it would pay up to $4,000 in travel expenses for any employee that sought an abortion.

In a statement released to WCPO, a Kroger spokesman said that “We invest in the whole person with a comprehensive benefits package that includes quality, affordable health care and travel benefits up to $4,000 to facilitate access to quality care for several categories of medical treatments and a full range of reproductive health care services, including abortion and fertility treatments, for company-plan participants.”

Giant Eagle, a Pittsburgh-based company that employs people in Pennsylvania, Ohio, and West Virginia, will likewise cover $4,000 in travel expenses for employees seeking an abortion. The company told Pittsburgh’s Action News 4 Tuesday that “At Giant Eagle, we are committed to providing our team members access to comprehensive health care, including access to reproductive care.”

“We join other businesses by committing to reimburse expenses for covered family members to travel between states to access family planning services,” the statement continued. “We will share specific details related to this offering with our team members in the coming days.”

In a statement released Monday, the company said in a statement “Prioritizing the well-being of our Team Members (employees) means to ensure they have the ability to make personal decisions about their health and future. We will now cover costs to travel outside Ohio for reproductive health care to the fullest extent permitted by state law.”

“We strongly support our Team Members’ right to make health care choices, and will continue to do so on our relentless pursuit for equal opportunity,” the statement concluded.

Other companies that have announced that they will pay travel expenses for abortion include J.P. Morgan Chase, Amazon, Tesla, DICK’s Sporting Goods, Facebook, and Google.

J.P. Morgan Chase spokesman Justin Page said in a statement that “As always we’re focused on the health and well-being of our employees, and want to ensure equitable access to all benefits.” The company previously released an email on June 1 relating that it would cover travel expenses for employees that had to travel over 50 miles from their house for covered healthcare-related services.

Nationwide announced that it is considering paying employees’ travel expenses for abortion. The company said in a statement that “As a company that values people, Nationwide recognizes that medical decisions and family planning are deeply personal … We are monitoring this new development and, over the coming weeks, will determine any implications to our policies and benefits.”

Planned Parenthood recently filed a lawsuit to block Ohio’s heartbeat law, claiming that the law violates the Ohio constitution, but the Ohio Supreme Court on Friday denied a request by abortion clinics for an emergency stay on the law.

Other pro-abortion groups have filed lawsuits attempting to stop state laws limiting abortion. Lawsuits in Louisiana and Utah have succeeded in obtaining temporary stays on pro-life laws, though the stays are pending hearings. A Florida judge said Thursday that he would temporarily block Florida’s 15-week abortion ban after a lawsuit from pro-abortion groups.