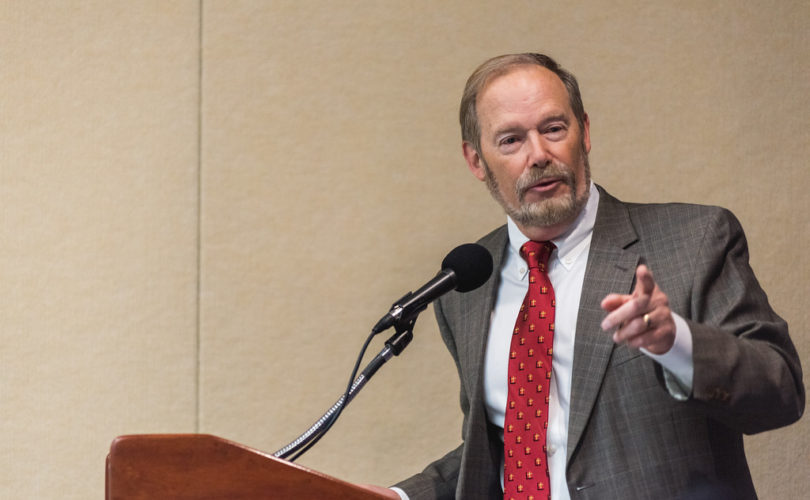 October 18, 2017 (LifeSiteNews) — Social scientist and author Steven Mosher called the global warming movement an enemy of the sanctity of innocent human life at an international symposium that began online Tuesday to address the anti-Christian nature of population control.

Mosher, long recognized as an expert in China’s domestic policy, started his address by explaining that the earth’s temperature has always fluctuated, sometimes dramatically.

The bestselling author, who went through a Ph.D program in Oceanography at the University of Washington, further noted that during the Jurassic period, the earth was 15 degrees warmer on average than it is today.

Criticizing global warming fearmongers, Mosher said not long ago the same “experts” were frantically making the exact opposite claims. “In the 1970s … the climate ‘experts’ were warning about a coming ‘ice age,’” he said. “Now it has flipped over 180 degrees to be global warming.”

“The truth is, nobody really knows what’s going to happen to the climate in the future,” Mosher explained. “We’ve seen extremes of temperatures on the cold side and on the warm side that make any projection of one or two degrees pale in comparison.”

Mosher spoke on “Environmentalism and Climate Change as an Avenue for Population Control.” The International Conference on Population Control is sponsored by the Lepanto Institute. Its theme is “How Radical Enemies of Life are Pushing Their Global Agenda to End Poverty by Eliminating the Poor.”

Turning to his compromised colleagues, Mosher said too many are swayed by the government dole. “I’m really appalled at how the scientific community has sold out for big research grants and to get their name highlighted in the faculty journal and get invited to U.N. conferences,” Mosher said. “This is the biggest scientific fraud ever perpetrated on the family of man.”

Mosher accused “experts” of jumping on the global warming bandwagon because “they are well paid to do so.” “When you spend billions of dollars subsidizing research, you generally get what you pay for,” he charged. “The climate scientist who gets the million dollar grant and says, ‘After study, there’s really no danger of global warming,’ doesn’t get his grant renewed.”

“But the guy who gets 10 million dollars for ‘finding’ global warming probably gets a hundred million after that,” Mosher illustrated.

Mosher, who received the Blessed Frederic Ozanam award from the Society of Catholic Social Scientists for “exemplifying the ideal of Catholic social action,” mentioned that meteorologist Anthony Watts has tallied government payouts related to global warming.  Watts estimates $1.5 trillion to $2 trillion are “tied up in the climate hoax.” ClimateDepot‘s Marc Morano described the racket as the “Great Climate Hustle.”

But even if the earth’s temperature is rising, Mosher says that does not translate into the doomsday predictions of Al Gore — that the state of Florida sinks into the ocean in a decade.

“In my view, a little bit of warming is not necessarily a bad thing,” Mosher claimed. “Even if the earth does warm in the next hundred years, I argue it will be a good thing for humanity.”

A warming planet will open up land for much needed farming. If temperatures rise, “we will see Canada be able to bring vast areas of land under cultivation.  We will see Siberia bloom. We will see food production go up,” Mosher said.

“More people die in the winter of cold than die of heat in the summer,” he explained.  “We’ll see mortality rates among the very young and the very old go down.  Lives will be saved,” Mosher said. “There will be less hunger in the world.”

“This is ultimately about radical environmentalists (engineering) their idea of paradise before man,” Mosher charged, saying radicals believe that people “ruined it.” “They have seized upon global warming as an excuse to justify their war on people to promote abortion, sterilization, and contraception around the world.”

Mosher emphasized that the ultimate goal of global warmists is population control. “They cheered China’s one-child policy from the very beginning,” he mentioned.

The Q&A session then turned to Catholic leaders’ part in the anti-life global warming movement.

“Catholic teaching promotes stewardship of the environment,” Mosher reminded listeners, “but some of the participants of recent Vatican conferences have a history of promoting population control (and) abortion. That’s in opposition to Catholic teaching. I’m surprised they were invited to these conferences (and) given a platform by the Vatican itself to propagate views to directly violate Catholic teaching.”

According to Michael Hichborn, president of conference sponsor the Lepanto Institute, pro-abortion population control activists have established a foothold inside the Catholic Church under the pretext of environmental protection. Now they are “actively working to undermine and subvert the Church and her teachings from within” in an “unprecedented attack.”

The pro-life researcher and social activist questioned the motivations of those in the Vatican who would give pro-abortionists a voice. “I’m afraid there are certain people in the Vatican who are more interested in winning applause from the world than … evangelizing and getting as many people home to heaven as possible,” he said.

Mosher quoted one Vatican guest speaker, former colleague Paul R. Ehrlich, who claims  “the biggest problem that we face is the continuing expansion of the human enterprise.”  Mosher quoted Ehrlich as saying, “Perpetual growth is the creed of the cancer cell.”

“When my wife and I had nine children, we didn’t think that they resembled cancer cells.  We thought that we were new souls into existence, cooperating with God in populating this world and hopefully in the next,” Mosher commented.

Mosher then took on worldwide abortion promoter Bill Gates. “Bill Gates tried to argue that he was only funding population control programs in countries where the population was increasing at three percent a year,” Mosher quoted, adding that he disagreed that high birth rates are a problem in the first place. “But I said, ‘Bill, there are only a few small islands in the Pacific where the birth rate is still that high.’”

Then Mosher got to his point with Gates. “If you’re worried about high birth rate, cure childhood diseases, reduce the infant mortality rate, and the birth rate will come down naturally,” he told the Microsoft billionaire. “The reason why families in Africa still have four and five children is because they expect to lose one or two children to disease before they reach adulthood.”

Mosher went on in his address to assert that climate changers have the solution all wrong. “This is all done under the false assumption that if you reduce the number of people on the planet you will somehow increase the number of seals and whales and trees and other things that the radical environmentalists seem to value more than human beings,” Mosher revealed. “What we need to have is continued economic growth, because once a country gets above $2,000 per capita, they have the resources to set aside natural parks and nature preserves and national forests and so forth.”

“It’s poverty that’s the enemy of the environment, not people,” he summarized.

The author described the global warmist movement as “anti-people.” “Here we almost have a demonic hatred of our fellow human beings,” he said. “They cry copious tears over a mistreated dog or cat, but they ignore that 4,000 babies are being brutally killed — torn limb from limb — in wombs across the United States today.”

“The other side of the evangelization coin,” Mosher said, “is allowing the human beings to come into existence in the first place.”

Back on the subject of Catholic response to global warming threats, Mosher said the Christian response cannot be legislated. “The questions of how we should be good stewards of the environment are prudential questions that will never be settled dogmatically,” the Population Research Institute president concluded.

Part of the Catholic solution is the Pontifical Academy of Science should invite as contributors “only people who were Catholic,” Mosher offered.

“If you do not have a Trinitarian worldview,” he explained, “then your position on many of these issues are going to be radically different than what the Catholic Church teaches.”

Global warmists “are people who have radically different views of what humanity is,” Mosher said. “It makes a real difference if I think that mankind is only a little lower than the angels, created in the image and likeness of God. Paul Ehrlich believes that we’re only a little higher than the apes, and it’s necessary now to thin the herd. He believes that we’re only animals, (so) there’s no moral question to be answered; it’s just a simple question of numbers and power.”

“Such a radical reductionist view of what human beings are should not be endorsed by the Vatican,” he opined.

Mosher commented that after listening to some of the non-Catholic Vatican conference speakers, Pope Francis himself has talked about climate change as the cause of world hunger. “That gets the facts exactly backwards,” he said. “I think we need to go to Rome … and talk and educate people.”

Hichborn noted the significance of the issue today. “Population Control is an agenda that ties together nearly every major cause of the anti-family left,” he said. “Homosexuality, environmentalism, poverty reduction, foreign aid, and even mass immigration are connected to the population control agenda.”

“For the sake of souls, lives, and the family, it is vitally important for everyone who calls themselves pro-life to stand up now,” Hichborn added. “If we don’t fight this now, it won’t be long before there won’t be a civilization left to defend.”

The conference continues through October 19 online. To register, go here.