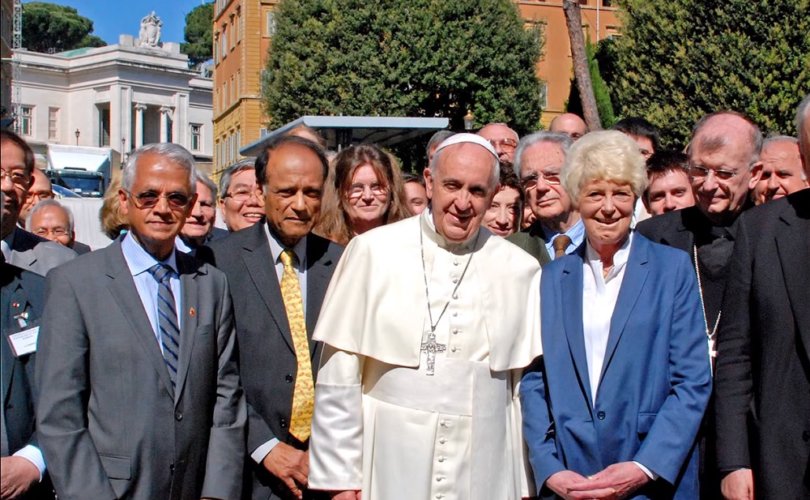 ROME, February 25, 2020 (LifeSiteNews) — Pope Francis’s Global Education Pact is a golden opportunity to use the moral authority of the Catholic Church to institute “cradle to grave climate literacy” for children as young as pre-kindergarten, a prominent member of the Vatican’s Academy of Sciences has said.

Speaking at a Vatican workshop on the Global Education Pact, hosted by the Pontifical Academy of Sciences (PAS) on February 6–7, Dr. Veerabhadran Ramanathan, director of the Center for Atmospheric Sciences at the Scripps Institution of Oceanography, University of California, San Diego, said the American public is not giving climate scientists and activists the “strong, unequivocal public support” they need to make “drastic changes” in society.

“We have tried everything, and nothing is working,” Dr. Ramanathan admitted. He said, “What we need is societal transformation to garner such support,” adding that “education is a tool to make that transformation.”

Dr. Ramanathan, 74, was appointed to the Pontifical Academy of Sciences under the pontificate of Pope John Paul II. He said he has come to the conclusion through attending PAS meetings that “the quest for a sustainable planet and for a sustainable humanity must include cradle to grave climate literacy for everyone, including children in kindergarten, students in colleges, and adults all the way to senior citizens.”

In his talk, titled “Climate Change, Wellness and Education,” Dr. Ramanathan outlined one such cradle-to-grave education program called “Bending the Curve: Climate Solutions,” which he developed with academics and researchers at the University of California. The program, funded by the Gates Foundation, has been used to promote “climate literacy” among children pre-K to 12 in California and focuses on “solutions rather than science.”

He also said he is “already in discussion” with U.S. Catholic clergy, such as Bishop McElroy of San Diego, and is about to launch a new “education project” that “could be used by bishops and priests” to promote climate literacy among Catholics.

Dr. Ramanathan said he believes that having the Catholic Church’s support is key to advancing a “moral revolution” on climate change. “The transformational step may well be a massive mobilization of public opinion by the Vatican and other religions for collective action to safeguard the well-being of both humanity and the environment.”

In comments to LifeSite following his presentation at the Global Education Pact workshop, Dr. Ramanathan also said he believes that Pope Francis has a particularly pivotal role to play in advancing this revolution. “Pope Benedict was very supportive of the environment,” he said, “but after Pope Francis [was elected], when I briefed him, I told him that he had become a modern leader for the whole world — to Catholics but beyond.”

“I saw in this a great opportunity, because the climate change issue has become a moral issue,” Dr. Ramanathan continued. “After the 2014 [PAS] meeting on Sustainable Humanity, Sustainable Nature: Our Responsibility, we all went and met Pope Francis in the parking lot outside the Casa Santa Marta. I told him about the morality of this issue, that most of the pollution which is causing climate change is caused by the wealthiest one billion people. And then I told him there were three billion who had not even discovered fossil fuels and they are still living in seventeenth-century technologies and they would be seriously impacted by this.”

“That’s why now I work with faith communities and religious communities,” Dr. Ramanathan explained. “As a scientist, I have no authority to talk about moral issues. But faith leaders like Pope Francis have the authority.”

Particularly with the American public, “scientists like me need a way to talk to the people directly, outside politics,” Dr. Ramanathan said. “I find the most effective way to do that is to talk to the priests, the bishops, faith leaders,” he added.

In addition to his collaboration with Bishop McElroy of San Diego, Dr. Ramanathan said he is also working closely with Richard Miller at the Jesuit-run Creighton University in Omaha, Nebraska, and with Villanova University in Pennsylvania.

Asked to comment further on the importance of the Catholic Church’s moral authority on climate issues, Dr. Ramanathan said he didn’t wish to sound “American-superior” but believes that the participation of America is key to solving the problem. “It would be nice if American Catholic churches would take the pope’s [words] to a higher class,” he said.

Dr. Ramanathan told LifeSite he sees his role as “trying to take climate change out of politics.”

“I have found churches to be that non-political forum. Because both conservatives and liberals go to the same church. There’s no liberal church and no conservative church. That is why I find the key to solving the problem is for academics to form alliances with religions,” he said.

Pressed on whether he thinks overzealous climate activists are using scare tactics to turn children into political activists, also through education, the longtime member of the Pontifical Academy of Sciences said he believes “we are sending our children on a plane that’s going to crash if we don’t do anything” about climate change. “In some way they have to know the reality,” he said, “but if you’ve paralyzed them, then you’ve done more damage.”