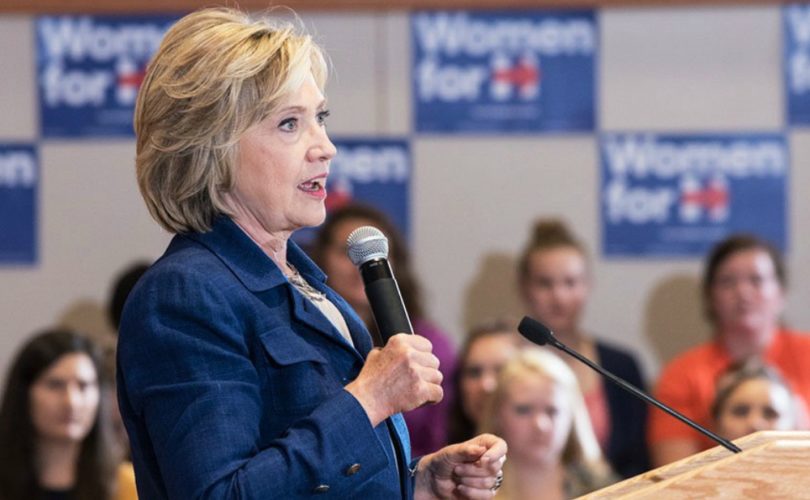 “There can be restrictions in the very end of the third trimester,” Clinton said, “but they have to take into account the life and health of the mother.”

Clinton has long championed the abortion agenda, in the U.S. and abroad.

Despite the recent exposure of Planned Parenthood’s trafficking in the body parts of unborn children aborted at its facilities, Clinton said in August she was proud to stand with the abortion giant.

That same month she compared those opposed to continued federal funding of the nation’s largest abortion chain to terrorist groups. Clinton also hired a former Planned Parenthood organizer around that time to focus on the Asian-American vote for her presidential campaign.

Earlier this year she told a feminist conference in Manhattan that religious beliefs that oppose abortion have to be changed, and also opposed a District of Columbia resolution protecting religious liberty in favor of abortion.

Last year she told the United Nations that it is a “bedrock truth” that abortion restrictions obstruct human progress, and any efforts to advance women’s rights must start with increased access to contraception and abortion.

She also told an international feminist conference last year that she was embarrassed that the U.S. hadn’t passed the controversial pro-abortion CEDAW treaty.

She used the ostensible constitutional right to abortion to frame her response, and also qualified her answer stating she was open to restrictions including consideration for the “life and health of the mother,” a dubious concept employed by pro-abortion supporters, but it was Republicans that would not approve such legislation.

“If there is a way to structure some kind of constitutional restrictions that take into account the life of the mother and her health, then I am open to that,” Clinton said, “but I have yet to see the Republicans willing to actually do that, and that would be an area where if they included health, you could see constitutional action.”

The week prior, Clinton repeated the pro-abortion contention that late-term abortions could be necessary for medical reasons, and opposed abortion restrictions when asked about them on another television news program.

“I think that the kind of late-term abortions that take place are because of medical necessity, and therefore I would hate to see the government interfering with that decision,” Clinton said on Face the Nation. “This gets back to whether you respect a woman’s right to choose or not, and I think that’s what this whole argument is about.”