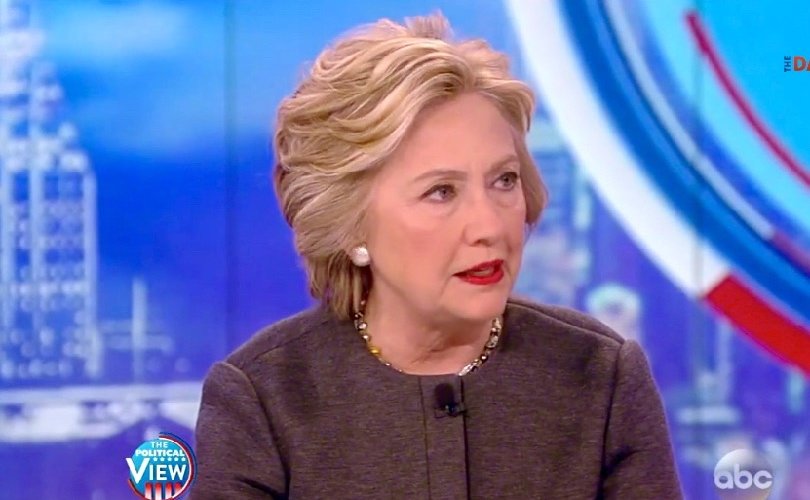 WASHINGTON, D.C., April 6, 2016 (LifeSiteNews) — Hillary Clinton has doubled down on her contentious position that “the unborn person does not have constitutional rights,” now stating that even the child just hours away from delivery is deprived of rights because “that is the way we structure it.”

Paula Faris of ABC’s “The View” asked the Democratic frontrunner to clarify her position stated last Sunday on NBC’s “Meet the Press.” Faros asked Clinton, “At what point does someone have constitutional rights, and are you saying that a child, on its due date, just hours before delivery still has no constitutional rights?”

“Under the law that is the case, Paula,” replied Clinton.

Clinton then went on to declare her support for the 1973 Roe v. Wade ruling that legalized abortion, calling it “an important statement about the importance of a woman making this most difficult decision with consultation by whom she chooses, her doctor, her faith, her family. And under the law — and under certainly that decision — that is the way we structure it.”

Weeks prior to birth, a preborn baby is a completely formed human being with perfectly functioning brain, eyes, heart, and lungs. The baby is able to hear sounds from the outside world and recognizes its mother's voice. The baby is capable of surviving outside its mother's womb.

Critics have called Clinton’s position on life out-of-touch with the American mainstream.

“Clinton revealed that she believes no unborn child is subject to constitutional rights,” the Republican National Committee said in a statement on Sunday when Clinton first made her position clear.

“Voters now know Clinton’s extreme stance against the value of protecting life, and can no longer be misled by her deceptive pandering,” the Committee stated.