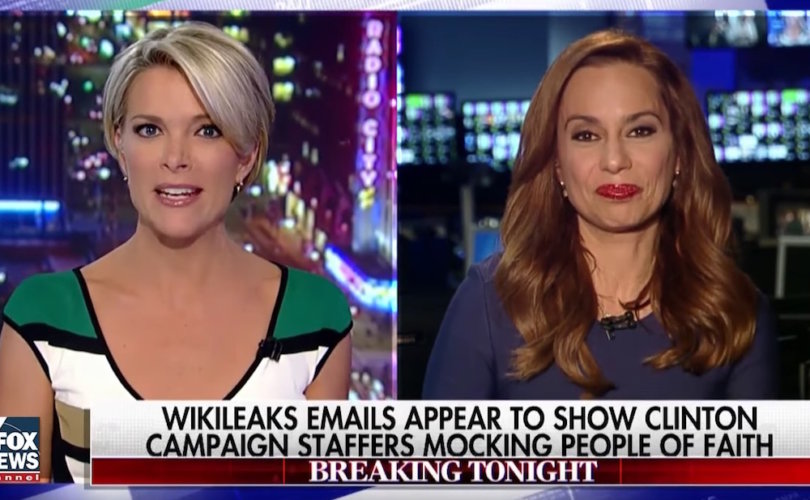 Halpin called a traditional, conservative reading of Catholicism “an amazing bastardization of the faith.”

Donald Trump’s campaign responded by demanding the officials be fired. “We call on Hillary Clinton to apologize and fire the staff involved in this anti-Catholic bigotry,” said campaign manager Kellyanne Conway.

“This crowd has been anti-Catholic for a long time,” said former Education Secretary Bill Bennett on last night’s edition of “The Kelly File.” He classified Clinton’s team as “transatlantic agnostic progressives” who “do not believe in things like the authority of the Catholic Church.”

But Julie Roginsky, a Democratic strategist, told Fox News last night that the e-mails express the authentic voice of American Catholics, who also disdain the authority of the papal Magisterium.

“I see it as Catholics discussing what they consider to be a Reformation in their church,” Roginsky said. “The vast majority of American Catholics seem to agree with them.”

“But,” Roginsky admitted to Megyn Kelly, “they are pejorative in their tone toward the hierarchy of the Catholic Church.”

Roginsky cited a host of polling data showing that most American Catholics believe contraception and homosexuality are morally acceptable.

A Pew Research Center poll released this summer shows that more than two-thirds of Catholics approve of the HHS mandate, and 54 percent say the government should force Christian business owners to participate in same-sex ceremonies, even if doing so violates their faith.

“What they’re saying is potentially and actually – actually – in step with what the majority of American Catholics believe,” Roginsky said.

But rather than making political hay, Adam Cassandra of the Cardinal Newman Society told LifeSiteNews at the time, “The first concern of any Catholic who sees these numbers should be for the souls of the poll respondents and anyone else who doesn’t agree that all three of these actions are morally wrong.”

Judie Brown of the American Life League has told LifeSiteNews that prominent Catholic defections on moral issues are “further evidence of the decay that is occurring within the Catholic Church in America.”

“Had the bishops, years ago, enforced church law and made it clear…that public defiance of church teaching would result in denial of the reception of Holy Eucharist until such time as the Catholic in question repents of his sins of defiance, we would not today be hearing of outrages” like these, she said.

Megyn Kelly seemed unconvinced. An animated Kelly asked, “Why don’t you just send your director of communications out there to just own what she said and apologize to the millions of American Catholic voters who you’re trying to solicit votes from this election?”

To date, the Clinton campaign has responded only by saying WikiLeaks is acting on behalf of Russian intelligence to tip the election for Donald Trump, although intelligence agencies have not verified that assertion.

Clinton officials have not denied the e-mail’s authenticity or apologized for its content.