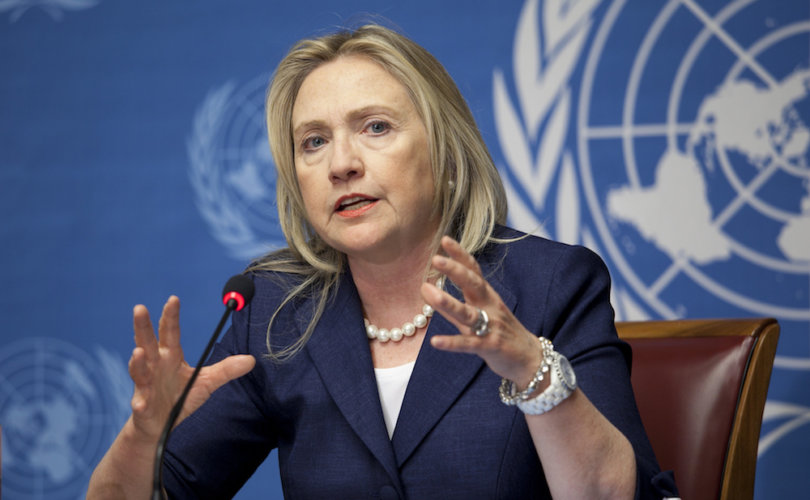 The 2016 election “is about whether abortion is legal, and whether women make our own health choices,” she said on CNN.

Asked about Donald Trump's comments that the law should penalize women who have an abortion, she replied, “It's very clear that Donald Trump wants to repeal that fundamental right [to abortion], just like all the other Republican candidates.”

Trump opposes abortion except in the cases of rape, incest, or to save the life of the mother.

“That is absolutely unacceptable,” she said. “It is outrageous.”

Clinton has said that abortion could be restricted only “at the very end of the third trimester” and, as a U.S. senator, she voted against the partial birth abortion ban.

This election, she has called for a repeal of the Hyde Amendment, signed by President Jimmy Carter, which prevents U.S. taxpayers from funding abortion in most cases. Her position aligns with the Democratic Party platform, which officially calls for taxpayer-funded abortions throughout all nine months of pregnancy.

“The choice is really clear,” she said. “The Republicans all line up together.”

Ohio Governor John Kasich shares Trump's position on abortion, while Senator Ted Cruz says he would oppose aborting babies who were conceived in rape or incest.

Clinton has said numerous times that the direction of the Supreme Court hangs in the balance in this election, both with the vacancy left by the death of Justice Antonin Scalia and the advanced age of several other justices.

“I think it's a real reminder of the stakes in this election,” Clinton said.