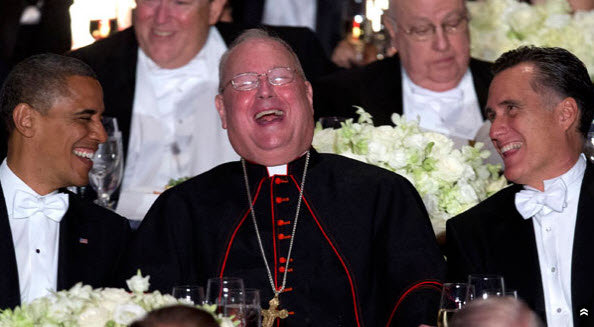 Cardinal Timothy Dolan of New York with presidential candidates Barack Obama and Mitt Romney at the Al Smith dinner in 2012.

NEW YORK, September 21, 2016 (LifeSiteNews) – The Archdiocese of New York's annual $3,000-per-plate Al Smith Dinner is generating controversy again this year over its election year practice of hosting the presidential candidates from both parties.

The Archdiocese will give a speaking platform at the October 20 event to both Donald Trump and strident abortion advocate Hillary Clinton, a representative of the event’s foundation confirmed for LifeSiteNews.

The annual affair benefits Catholic Charities of the Archdiocese of New York and is held at the Waldorf Astoria. It is named for the late former New York governor and first Catholic presidential candidate. It features high-profile guests along with joint appearances by opposing presidential nominees who roast one another in humorous speeches.

The event began as an opportunity for the two political parties to make peace for a time while coming together to raise money for the poor. However, in recent years, the dinner has been the subject of controversy after Catholics and pro-life leaders called attention to the erroneous impression it gives that the Church accepts the positions of pro-abortion and homosexual “marriage” politicians by providing them a public platform.

This concern over misrepresenting the Church’s teaching on abortion and same-sex “marriage” is heightened by the corresponding danger for the dinner to be used by the politicians as a photo opportunity with Catholic Church leadership, in particular New York Cardinal Timothy Dolan.

Cardinal Dolan is the president of the Board of Directors of the Alfred E. Smith Memorial Foundation, joined by Monsignor Gregory Mustaciuolo, chancellor and vicar general for the New York archdiocese.

The U.S. Bishops have a specific policy prohibiting Catholic institutions from providing a public platform for politicians who act in opposition to the Church’s fundamental moral teaching. The 2004 USCCB document ‘Catholics in Political Life’ states:

The 2012 appearance by Obama was especially concerning to Catholics based on the Democratic president’s imposition of the HHS contraception mandate on the nation’s Catholic and Christian employers and because of his rabid support for abortion and gay “marriage,” prompting calls for candidate appearances to be done away with altogether.

Catholic observers were not surprised by this year’s invite of Clinton, a vehement abortion proponent, and Trump, who has a checkered record but says he is now pro-life and has pledged to nominate pro-life justices to the Supreme Court and defund Planned Parenthood.

Christian Review Editor Deal Hudson said the dinner was “a kind of safe haven” where the two candidates could appear alongside each other, given their divergent positions on the protection of life and charges by some of silence on the part of the Church over Clinton’s abortion record and stance.

“Isn't it ironic that a ‘Catholic’ dinner would have devolved into nothing more than a showplace for featuring those who either favor outright murder of the preborn or walk a tightrope in order to be elected,” she told LifeSiteNews. “It would have been truly courageous for the Cardinal to have simply cancelled the event, but then again politics seems to come first always.”

“Defenders of this policy claim they are acting in a spirit of charity or open debate,” he said. “Yet, when the Cardinal of New York City blows off the USCCB's directive by inviting radical pro-aborts such as Clinton or Obama for a platform at the Al Smith dinner, can there be any wonder that other Catholic institutions will blow it off as well?”

“Catholics ought to expect a higher standard from our shepherds,” Hichborn continued, “one that imitates Christ, not the world.”