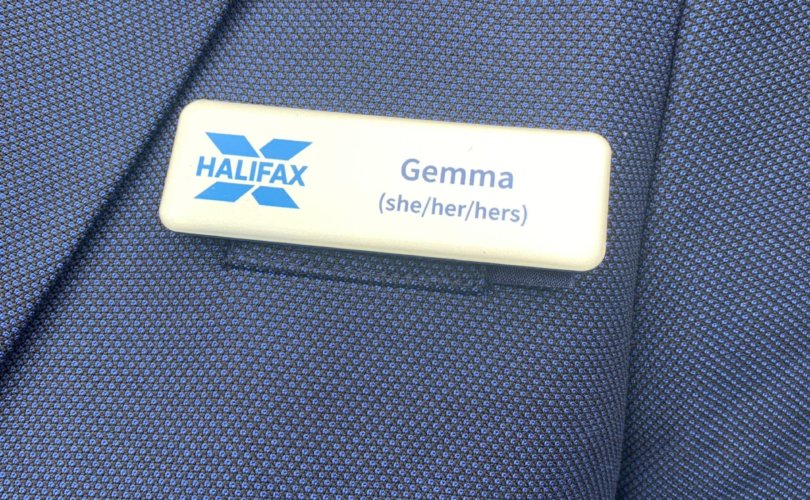 (Reclaim The Net) – British bank Halifax has threatened to close customer accounts and even report people to police if they post “inappropriate” content to the bank’s social media channels.

Halifax has been facing online backlash over the last week after the bank told people to close their accounts if they do not like the bank’s new pronoun policy on staff badges.

On Tuesday, the bank tweeted to its over 100,000 followers that it had a new policy to allow pronouns to be featured under staff’s names on their badges.

The tweet was a photo of a badge of an employee called “Gemma,” and had her preferred pronouns, “she/her/hers.” The bank wrote that “pronouns matter” and that the policy would help avoid “accidental misgendering.”

A customer replied: “There’s no ambiguity about the name ‘Gemma.’ It’s a female person’s name. In other words, it’s pathetic virtue signaling and is seen as such by almost everyone who has responded to the initial tweet. Why are you trying to alienate people?”

In response, a member of the Halifax social media team called AndyM said: “If you disagree with our values, you’re welcome to close your account.”

We strive for inclusion, equality and quite simply, in doing what’s right. If you disagree with our values, you’re welcome to close your account. ^AndyM

Halifax’s response angered many customers, and people have been writing on social media that they have closed their accounts, insurance policies, and cards.

Halifax linked to its Inclusion and Diversity policy where it said it would contact police if people behave in an “inappropriate” way towards their “social media channels” and described “inappropriate” behavior as “racist, sexist, homophobic, transphobic or ableist” behavior.

“I’m a homosexual man. I’m appalled by your adoption of this homophobic, woman-hating claptrap, and by your attitude to customers making perfectly reasonable objections to it,” said Gareth Roberts, former scriptwriter for Doctor Who.

Branding expert Martin Townsend called the policy a “Ratner moment,” that will go down as one of the biggest PR blunders.

“It’s a Ratner moment I would say. It’s astonishing that they do something to make themselves look right on and virtue signaling – and they end up looking like the most old fashioned bullies, telling them: ‘If you don’t like it you’re welcome to leave,’” he said.

“It’s extraordinary. Who treats their customers like that? I’ve never heard of a company inviting their customers to go. It’s so typical of debate these days: “If you don’t like it, off you go”. How is that inclusive? There are big questions about Halifax today and who came up with it.”

Another customer tweeted: “My wife and I have followed this advice, partly due to Halifax’s current virtue signalling but mostly the eagerness of AndyM to lose customers. Mortgage is being moved, credit cards have been cancelled, deposit account closed. Had been with you since the 90s. Nice work.”

Another one wrote: “It is incredibly rude for Halifax to say to customers if you don’t like it go away. It’s astonishing to have a bank behaving like a trans activist.”

In an interview with BBC Radio 4, finance expert Matthew Lynn said: “Companies don’t need to aggressively take positions on what are still quite divisive social issues. It probably didn’t come from the CEO – it comes from a bunch of millennial 20-somethings running the Twitter feed.”

“To tell customers that they should go and close down their accounts and go to a different bank because they have a slightly different view on this is way too aggressive,” Lynn said.