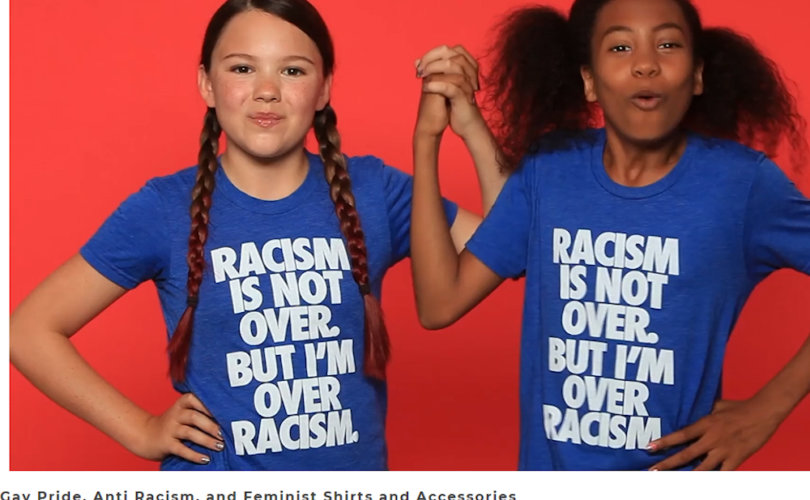 FCKH8.com is a T-shirt company that caters to consumers who support left-wing causes. The videos with the young girls appear on the company’s website alongside advertising photos with near-naked men.

FCKH8.com achieved notoriety in 2014 with a video entitled “Potty-mouthed Princesses.” In that advertisement, little girls ages 6 to 13 let loose a tirade of profanity-laden thoughts on such adult topics as wage disparity, sexual assault, and rape.

FCKH8.com is owned by Synergy Media, a for-profit marketing company. According to its website, FCKH8 “has raised over $280,000 for equality causes, arming thousands of people with pro-LGBT equality, anti-racism and anti-sexism T-shirts that act as ‘mini-billboards’ for progress.”

(The video, which LifeSite cannot embed because of its graphic nature, is on YouTube here.)

“Oh, Scouts, oh, Scouts,” trills an elderly woman in a pink uniform, “ready for your song about President Trump?”

The camera cuts to an actor in a papier-mache Trump mask patting someone in a KKK uniform on the back.

“Ya call women ‘fat pigs,’ show us no respect.

(At this a snarling girl drives a fist into the palm of her fake fingernail-adorned hand.)

(Here a girl makes an obscene gesture with both hands.)

Near the end of the video, an adult woman points to the pink “pussy hat” on her head, calling it “a powerful symbol of the fight for equality.” She encourages viewers to buy a similar hat or one of a line of T-shirts. A “Pussy Scout” hat normally retails for $14.99.

In American slang, the word “pussy” is both an archaic diminutive for a cat and an obscene expression for women’s genitalia. The pink hat, which also represents women’s genitalia, was adopted by anti-Trump activists at the pro-abortion “Women’s March on Washington” in January 2017. The U.S. president was recorded using the word in a lewd conversation in 2005.

FCKH8.com has produced another profanity-laced video for its own website. Here a stereotypical white American “Southerner” argues with children for the survival of the Confederate flag.

The advertisements are “disgusting and abusive,” Fiorella Nash, a mother of two young daughters, told LifeSiteNews. “Commandeering children for political causes is wrong whatever the cause. They have a right to be children.”

A veteran pro-life campaigner, Nash has traveled across the United Kingdom to build awareness of the worldwide “gendercide” against unborn baby girls. She believes that children don’t need lewdness to communicate confidence.

“I want my children, male and female, to grow up respectful, courteous, and capable of putting across a strong argument intelligently,” Nash said.

FCKH8 has future plans for the “Pussy Scouts.” According to its website, it will soon sell “Pussy Scout cookies.” Some of the cookies pictured resemble the “pussy hats.” Others are frankly modeled on female genitalia. One hundred percent of the proceeds from the cookies will go to Planned Parenthood.