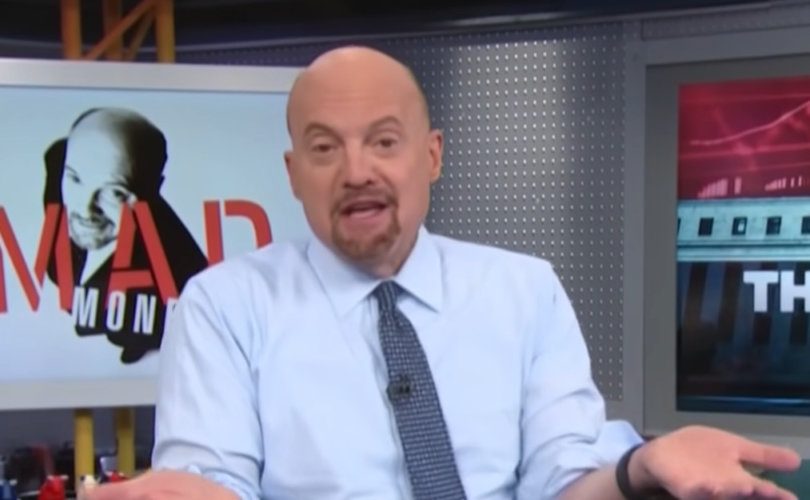 (LifeSiteNews) — CNBC market commentator and stock analyst Jim Cramer called for a nationwide forced vaccination campaign to be carried out by the military.

Cramer’s monologue on November 29 during his “Mad Money” show urged President Joe Biden to mandate vaccinations nationwide in order to help the economy.

“With the new omicron variant sweeping the globe, how do we finally put an end to this pandemic? How do we save lives and get business back to normal so everybody can put dinner on the table?” Cramer asked. “Simple, the federal government needs to require vaccines, including booster shots, for everyone in America by, say, January 1.”

He made the comments while criticizing the response of political leaders to COVID, arguing that the nearly two years of lockdowns, mask mandates, and lately vaccination mandates on some, did not go far enough.

The CNBC host said the “government has lost the ability, or the will, to make our people do the right thing.”

“Nobody wants to be the bad guy, so we’ve allowed a pastiche of uncoordinated health organizations to dictate an on-again, off-again series of measures that mostly just leave us baffled and confused,” Cramer said.

“The buck stops at the White House,” Cramer continued. He harkened to the days of polio vaccination and likened the effort to stop COVID, which has an infection survival rate of greater than 99.95% for those younger than 50 years old, to winning a war.

“It’s time to admit we have to go to war against COVID. Require vaccinations universally. And have the military run it,” Cramer said. “If you don’t want to get vaccinated, you better be ready to prove your conscientious objector status in court, and even then you need to help in the war effort by staying home until we finally beat this thing.”

“Until the federal government gets serious and starts requiring vaccinations nationwide, you better get used to more COVID variant freakouts like we had last Friday,” Cramer said. He was making a reference to a dip in some stocks on the day after Thanksgiving.

“They represent our sorry, no good, all-our-fault future. And it will keep being our fault until our leaders stop bending over backward for the not-so-conscientious objectors,” he said, apparently in reference to individuals who have chosen not to take the COVID jabs.

Cramer’s forced vaccination demand happened during the same show in which he told people not to “panic” about omicron.

He said it is more “infectious” but not necessarily more “deadly” than the previous strains. Cramer praised Moderna and Pfizer, and even suggested two executives with the companies should win “person of the year.”

During a segment called “Why Panic Isn’t a Strategy,” he touted stocks that would benefit from people staying indoors, such as shipping company FedEx and online commerce company Shopify.

Whether Cramer’s ideal plan of massive vaccination could pass legal challenges remains questionable, since President Joe Biden’s healthcare worker and contractor vaccine mandate has been enjoined. The Fifth Circuit Court of Appeals has also blocked Biden’s use of the Occupational Safety and Health Administration to enforce a vaccine mandate on employers with more than 100 employees.