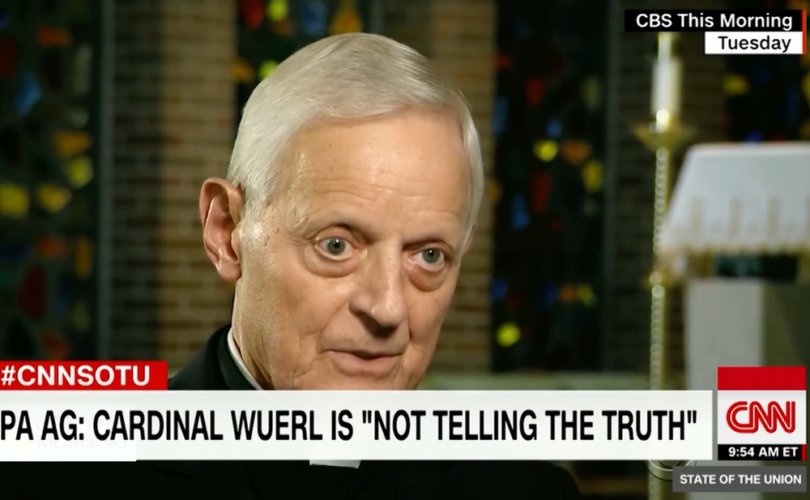 The 900-page Pennsylvania report documents over 1,000 allegations dating back decades against 300 priests in the state’s six dioceses, and mentions Wuerl over 200 times.

The report has led to ongoing, widespread calls for the Archbishop of Washington to resign, but as clips from Tapper’s video show, Wuerl defends his record in statements that flatly contradict the report’s findings.

“Did you ever move priests quietly?” a reporter asks Wuerl, to which he responds: “That wasn’t, that wasn’t our process.”

“If there were allegations, we dealt with them immediately,” Wuerl states.

“The report confirms that I acted with diligence, with concern for the victims and to prevent future acts of abuse,” he asserts.

“I think I did everything that I possibly could,” he contends.

And he pulls out from the grand jury report three appalling cases of sexual abuse by priests in the Pittsburgh diocese —  Fr. Richard Zula, Fr. George Zirwas, and Fr. Ernest Paone — that fatally undermine Wuerl’s defense.

According to the report, Zula and Zirwas “manufactured child pornography” and “used whips, violence and sadism in raping their victims,” and Zula was arrested in 1988 and “charged with more than 130 counts related child sex abuse,” Tapper relates.

Zula had been removed from ministry when Wuerl arrived in Pittsburgh, but “in 1989, Wuerl authorized a $900,000 confidential settlement between the diocese and two of Zula’s victims, and that included a hush agreement,” Tapper noted.

Moreover, “under Wuerl’s leadership” the diocese “hired a doctor who worked with Fr. Zula to lessen the sentence” who produced a statement the grand jury report described as having “blamed the child victim.”

The diocese was aware of child sexual abuse claims against Zirwas “as early as 1987,” and received further complaints against him “between 1987 and 1995,” during which time he “continued to function as a priest” and “was reassigned to several parishes,” the report found.

As for Paone, his “predatory behavior dated back to the early 1960s” and he was “shuffled from parish to parish, all over the country.” In 1991, Wuerl approved the priest’s transfer to the diocese of Reno-Los Vegas, “even though the Pittsburgh diocese knew of Paone’s past,” Tapper points out.

Moreover, in 1996 Wuerl “refrained from sharing everything the Pittsburgh church knew about Paone’s past with the diocese of San Diego,” Tapper says.

Wuerl’s defenders say that as bishop of Pittsburgh, “he disciplined some priests and he fought the Vatican against an order to reinstate a predator priest,” he says.

And the grand jury report notes Wuerl wrote the Vatican asserting that “parishioners had a right to know if their priests were pedophiles,” and a spokesman for Wuerl said “he acted promptly to notify others” of the claims against Paone, Tapper says.

However, the grand jury report ultimately indicts Wuerl, concluding his “statements had been meaningless without any action,” he adds.

“In spite of Wuerl’s statement to the Vatican, the clear and present threat that Paone posed to children was hidden and kept secret from parishioners in three states,” the report says.

The archbishop of Washington has so far resisted the mounting pressure to step down, instead proposing to lead a “season of healing” in his archdiocese, and asking in a September 2 homily for “forgiveness for my errors in judgment.”

Respectfully, which errors in judgment? Signing off on a $900k payment to two children preyed upon by a priest, a settlement that required their silence? Hiring a doctor to testify for a predator priest and blame the victim? Helping that predator priest get out of prison early? https://t.co/K52QmnHmGf

Wuerl also released a letter to priests last Thursday admitting they had called for new leadership, but gave no sign he was going to step down.

The Washington Post, the Washington Examiner and some 9,200 people who signed LifeSiteNews’ petition are among those asking Wuerl to resign.

However, Vatican watchers maintain that since Wuerl sent Pope Francis his resignation two years ago when he turned 75, it’s up to the Holy Father to remove him. Almost 82,000 people have signed a Change.org petition calling on the Pope to do so.

‘Shame on you’: Man shouts at Cardinal Wuerl as he addresses abuse scandal