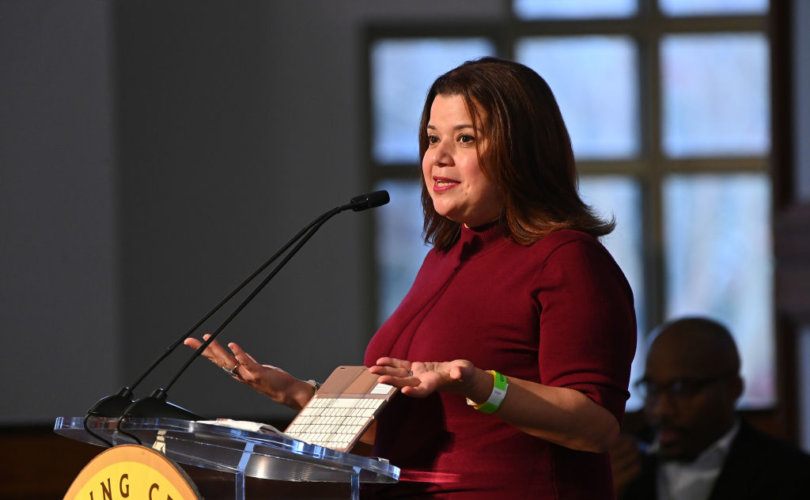 (LifeSiteNews) – A CNN political commentator cited the difficulty her family has had caring for her disabled brother and step-grandchildren to justify legal abortion.

“I am not anybody to tell you what to do with your life or your uterus,” CNN’s Ana Navarro said on Friday, during the network’s breaking coverage of the overturning of Roe v. Wade.

“[Be]cause I have a family with a lot of special needs kids. I have a brother who is 57, who has the mental and motor skills of a one-year-old. I know what that means financially, emotionally, physically for a family, and I know all families can’t do it,” continued Navarro.

Mentioning that she also has two step-grandchildren with disabilities – a one-year old girl with Down syndrome and a boy with autism – Navarro went on to reconcile her pro-abortion stance with her faith as a self-described “Catholic.”

“So, why can I be Catholic and still think [overturning Roe v. Wade] is a wrong decision?” Navarro asked. “Because I’m American. I’m Catholic inside the church, I’m Catholic when it comes to me. But there’s a lot of Americans who are not Catholic … and you have no damn right to tell them what they should do with their body[.]”

The idea that a Catholic can personally profess Church teaching but support legalized abortion is an error condemned by the Catholic Church.

“In the case of an intrinsically unjust law, such as a law permitting abortion or euthanasia, it is therefore never licit to obey it, or to ‘take part in a propaganda campaign in favor of such a law, or vote for it,’” Pope John Paul II declared in Evangelium Vitae. A doctrinal note approved by the pontiff stressed that it is “impossible” for a Catholic to back “any law” that promotes abortion.

Navarro’s comments provoked an immediate reaction among pro-lifers, with many pointing to the fact that her argument seems to imply that babies with disabilities are less valuable than those born healthy.

“The ugly cruelty. The utterly bald ageism and ableism. The unfettered call for violence against the unborn disabled,” lamented pro-life activist Lila Rose in reaction to Navarro’s statements.

CNN commentator uses her disabled brother & step granddaughter who has Down syndrome as examples of why we need abortion.

The ugly cruelty. The utterly bald ageism and ableism. The unfettered call for violence against the unborn disabled. pic.twitter.com/qo3jdfkK8b

“Translation: If children have special needs, they aren’t a life worth saving to Liberals,” added retired Marine Jason Nelson.

Translation: If children have special needs, they aren’t a life worth saving to Liberals. https://t.co/3kQWg4DUeT

“They don’t want healthcare. They want to rid the world of people with Down Syndrome,” chimed in Federalist legal correspondent Margot Cleveland.

They don’t want healthcare. They want to rid the world of people with Down Syndrome. @ananavarro lays out her case for genocide here: https://t.co/CoDIzZURTP

Despite the insistence from self-described Catholics like Navarro, U.S. Speaker of the House Nancy Pelosi, and U.S. President Joe Biden, that one can be a faithful Catholic while also being pro-abortion, the Catholic Church definitively teaches that abortion is murder.

“Since the first century the Church has affirmed the moral evil of every procured abortion. This teaching has not changed and remains unchangeable. Direct abortion, that is to say abortion willed either as an end or a means, is gravely contrary to the moral law,” reads the Catechism of the Catholic Church.

“Life must be protected with the utmost care from the moment of conception: abortion and infanticide are abominable crimes,” it adds.