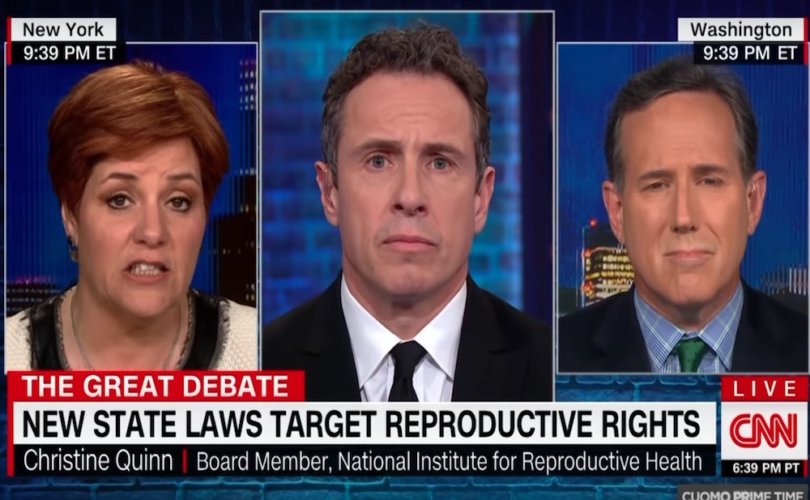 May 8, 2019 (LifeSiteNews) – Former Sen. Rick Santorum (R-PA) got into a heated debate Monday with CNN host Chris Cuomo and panelist Christine Quinn, both of whom emphatically denied that a baby growing in a mother’s womb is a separate human being.

Cuomo began the segment by asking Quinn, the president and CEO of the New York homelessness organization Win, to react to the current wave of bills that seek to ban abortion as soon as a fetal heartbeat can be detected. “This is a clear attempt to take decisions about a woman's body and birth out of the hands of a woman and out of the hands of doctors,” she said. “And that, to me, is really shocking.”

When Santorum’s turn to speak came, he challenged both of them on their framing that “this is all about choice, all about a woman's right.” No, he argued, “it's all about the life of a little baby. And – and you can invalidate that and say that – that doesn't matter. But to millions of Americans, it does matter, and it's not that we hate women or want to violate women, but we truly do care about the life of that child on the woman, and we think a good society protects those children.”

After Cuomo and Quinn expressed incredulity that Santorum refused to accept the U.S. Supreme Court’s Roe v. Wade ruling as the last word on the abortion debate, Cuomo invoked the discredited myth that women “were killing themselves in back alleys” before Roe, to which Santorum noted that millions of babies “are dying now too, Chris.”

“Rick, that is a big- that is a lie,” Quinn declared. “If you really cared about the health of human beings, you would never take an issue like this away from a woman and her doctor.”

“Do you realize a baby dies in an abortion?” Santorum asked. “Do you realize that? Are you ignoring that fact? That's a- that's a reality.” Quinn and Cuomo both retorted that this wasn’t a “legal fact,” leading Santorum to ask if they disagreed that “at the moment of conception, a child is human and alive.” Cuomo attempted to invoke “viability” and turn the conversation back to whatever the courts recognize.

“It’s in every biology textbook in the world, at conception that is a human life,” Santorum noted, to which Quinn claimed, “that is not the medical…that is not science.” Cuomo again refused to give a straight answer as to what a fetus is before viability. Santorum suggested he was essentially arguing an early-term baby was a woman’s “property,” to which Cuomo said, “I’m okay with that.”

After more back-and-forth, Santorum reiterated that abortion is “still taking a life,” which Cuomo conceded – while maintaining taking these lives is justified by the amount of thought abortion seekers put into doing so.

When it again became Quinn’s turn to speak, she flatly declared that “when a woman gets pregnant, that is not a human being inside of her. It's part of her body.”

Contrary to Quinn and Cuomo’s claims, long-settled biological criteria and numerous mainstream scientific and medical textbooks have established that a living human being is created upon fertilization and is present throughout the entirety of pregnancy.

Many abortionists and pro-abortion activists and philosophers admit as much, granting preborn babies’ humanity while either claiming a mother’s “bodily autonomy” trumps a baby’s rights or drawing a philosophical distinction between humans and persons (arguments pro-life philosophers have extensively challenged).

The final subject the panel touched on the topic of infanticide, with Cuomo taking exception to the “President of the United States saying that a baby is born at the end of full-term, swaddled in a blanket, and then they decide whether or not to execute it.” Santorum noted that Virginia Democrat Gov. Ralph Northam effectively endorsed it and New York legalized abortion up until birth.

“Go ask a priest if he's okay with you arguing the case that way and see how he feels,” Cuomo challenged. Quinn echoed him, declaring that “No priest is going to condone lying.”

In fact, Northam did endorse the notion of resuscitating severely-deformed newborns only “if that’s what the mother and the family desired” (in defense of a bill whose own author admitted would have allowed abortion as late as when a woman “has physical signs that she is about to give birth” such as “dilating.” New York’s law allows abortions past 24 weeks for (among other reasons) a woman’s “health,” which pro-lifers have long warned is a vague and subjective standard that effectively allows abortionists to justify abortion for any reason they want.

The current push for new born-alive infant protections is driven in large part by the lack of criminal penalties or clear-cut care requirements for abortionists who withhold treatment from newborns. Yet Cuomo dismissed pro-life arguments on the subject as “crap” meant to “stoke hate.”