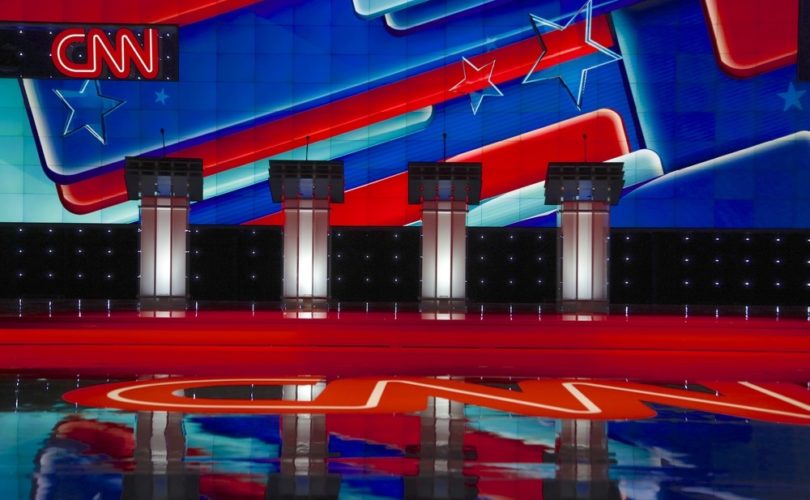 September 5, 2019 (LifeSiteNews) – Next month, CNN and the LGBT lobbying group Human Rights Campaign (HRC) will be joining forces to host a town hall marathon specifically for the 2020 Democrat presidential field to discuss issues pertaining to homosexuality and transgenderism, the two organizations announced this week.

The event will take place on October 11 in Los Angeles, CNN announced, to coincide with National Coming Out Day. Consisting of a series of “back-to-back town halls throughout the evening,” it will be open to Democrat candidates who have won at least 2 percent support in four consecutive national polls, and received contributions from 130,000 unique donors, including 400 donors apiece from 20 states.

Qualifying candidates to accept so far include former Vice President Joe Biden, openly-gay Mayor Pete Buttigieg, former Housing and Urban Development Secretary Julián Castro, and Sens. Kamala Harris, Amy Klobuchar, and Elizabeth Warren. The event will not be open to the public; the audience will consist of invited guests, “LGBTQ stakeholders,” and members of civic organizations, according to HRC.

“Today, at a time when our most basic civil rights and democratic values are under attack, our work has never been more urgent,” HRC president Alphonso David claimed in a press release. “We are eager to hear from this field of Democratic presidential candidates about how they plan to win full federal equality, defend the fundamental equality of LGBTQ people, and protect the most vulnerable among us — both here in the United States and around the globe — from stigma, institutional inequality, discrimination, and violence.”

All of the 2020 Democrat candidates are doctrinaire leftists on LGBT issues, from supporting the so-called Equality Act (which would impede the religious liberties and conscience rights of religious adoption agencies and businesses, as well as force women and girls to share sex-specific facilities with men) to opposing the Trump administration’s ban on gender-confused soldiers. Several have even added their “preferred pronouns” to their social media bios, in a show of solidarity with gender-identity activists.

Harris has bragged about forcing religiously-owned companies to violate their consciences, and last year suggested judicial nominee Brian Buescher’s membership in the Knights of Columbus was problematic because of its, pro-marriage stance. Warren has advocated for homosexuals to be allowed to donate blood despite increased risks of HIV.

Castro has participated in LGBT “pride” marches since 2009, Sen. Cory Booker has made a habit out of grilling Republican nominees over their views on homosexuality, as well as officiated same-sex “weddings, and former Rep. Beto O’Rourke has been caught on tape berating a Catholic priest for defending the Biblical view of marriage.

Rep. Tulsi Gabbard actually opposed same-sex “marriage” as late as 2004 but apologized for her past conservative stance in 2012. Even so, some left-wing activists have attacked her as insufficiently “progressive.”

The announcement comes after CNN hosted a seven-hour “town hall marathon” for Democrat candidates to discuss climate change, during which Sen. Bernie Sanders suggested he would support funding abortions worldwide as part of his environmental plan.