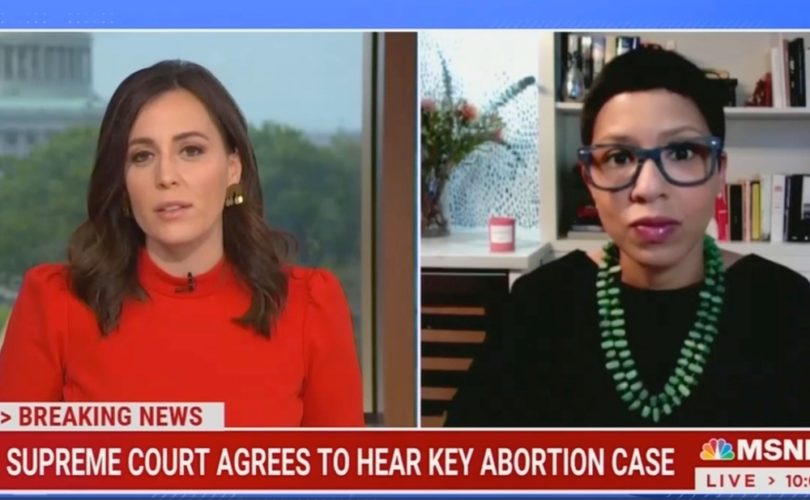 May 18, 2021 (NewsBusters) – The liberal hack journalists at CNN and MSNBC had panic attacks this morning over the Supreme Court reviewing a “controversial” 2018 abortion law in Mississippi, that bans elective abortions after 15 weeks gestation, arguing it signaled the end of Roe v. Wade. Each network panicked viewers with “breaking news” that the “conservative” Supreme Court had agreed to take up the contested state law….next Fall.

Between the two networks, abortion “rights” were mentioned eight times. But not once was the “right” to life mentioned, of course.

“We want to get to that breaking news from the Supreme Court that's happened in the last couple minutes. Here's the deal. The justices have agreed to take up a major abortion case next term that could test the limits of Roe V. Wade. It's really the court's first big move to try to reconsider abortion rights since Justice Amy Coney Barrett took the bench,” she touted.

Jackson’s only guest, Melissa Murray, is a MSNBC contributor who formerly clerked for liberal, pro-abortion justice Sonia Sotomayor and has written pro-abortion op-eds for The Washington Post. Needless to say, there was no conservative viewpoint aired in the entire interview.

The MSNBC host asked Murray to explain what was at “stake.” Murray touted “the stakes could not be any higher” because of the conservative makeup of the court and states making “more aggressive laws seeking to restrict the right to choose an abortion.” She worried this was the beginning of the end of Roe v. Wade:

Many of them have been challenged to the Supreme Court as a bid to overturn and completely dismantle Roe V. Wade. This is just one those challenges and just one that the court has decided to take up, so on the court's docket going into the next term will be this very fraught question of whether these continued protections for reproductive rights will be allowed to continue for women or whether they will be rolled back.

Jackson prompted her pro-abortion guest to fret over the “boost” to abortion opponents. In turn, Murray slimed pro-lifers as “anti-choice” before whining about “stalwart supporter of reproductive rights” Ginsburg being replaced by Barrett:

Oh it's certainly a boost. This is exactly what the anti-choice movement has been seeking for the last few years. Again, much of this is because of the changed composition of the court. It's not just that Justice Ruth Bader Ginsburg who was a stalwart supporter of reproductive rights has been replaced by Amy Coney Barrett. But the fact that there've actually been three new clear people who have been skeptical of abortion rights who’ve been added to the court, Brett Kavanaugh, Justice Neil Gorsuch and now of course Amy Coney Barrett.

JACKSON: Do you have any sense where these former justices, I'm thinking, for instance, justice Amy Coney Barrett might end up on this?

WILLIAMS: Well, she was clearly the big hope for abortion opponents because of they are writings about abortion and her earlier statements about her Catholic faith making a difference.

On CNN Newsroom, co-anchors Poppy Harlow and Jim Sciutto prodded legal correspondents Elie Honig and Jessica Schneider on why the public should be worried:

POPPY HARLOW: Significant breaking news just into us. The Supreme Court has agreed to take up a major abortion case next term concerning a controversial Mississippi law that bans most abortions after 15 weeks.

JIM SCIUTTO:  It's going to be a big test for the Roe V. Wade decision which initially legalized abortion particularly with the 6-3 conservative makeup of the court.

CNN also singled out justices Amy Coney Barrett and Clarence Thomas as partisan activists on the court. No one at CNN and MSNBC would admit that the far-left justices could be described the same way.

SCHNEIDER: [I]t also comes now with Justice Amy Coney Barrett on the court. We know as a private citizen she has expressed her anti-abortion views, however, during her confirmation hearing she did say that she wouldn't let her private feelings, her opinions impact her decision. But one justice who has spoken out repeatedly about Roe V. Wade saying that it needs to be overturned is Justice Clarence Thomas. He has made no secret of his opinion that it should be overturned.  I mean, we heard from him recently saying that Roe V. Wade has created the right to abortion out of whole cloth without a shred of support from the constitution's text. So this will be a real test for the court.

Schneider even fretted an end to COVID rules on mail order abortion drugs signaled a move “to the right” from the court:

It was just back in January when the court actually reimposed restrictions on the abortion drug that women could previously get without visiting a doctor, they reimposed the rules stating that women had to go in-person in order to get this abortion drug. So we've seen already the court sort of moving more toward the right and now this will be a major test for the court, no doubt — sorry, abortion rights activists are very concerned about this opinion — about this case being heard at the Supreme Court next term.

Not done attacking the conservative justices on the court, Sciutto scoffed at the notion that they would follow precedent in terms of Roe v. Wade:

SCIUTTO: The background here is important because Roe V. Wade has been a target of conservatives for years. By the way, as they choose justices for the court and other high courts, they're looking at what — how they might decide cases like this. I just wonder they've all been asked in their confirmation these questions, they all have an answer for it, tend to sort of say, well, you know, I'm not going to break with precedent, blah blah. Does that really mean anything?Or are we going to see with this court what conservatives have been trying to accomplish for decades now, if not overturning Roe V. Wade certainly restricting abortion more?

HONIG: I put almost no stock in the stock answer of I'm just going to follow precedent…

Just a reminder, this is the same network who brings on actors from The Handmaid’s Tale to fearmonger that the United States is turning into a dystopian hellscape when abortion restrictions get passed in some states.