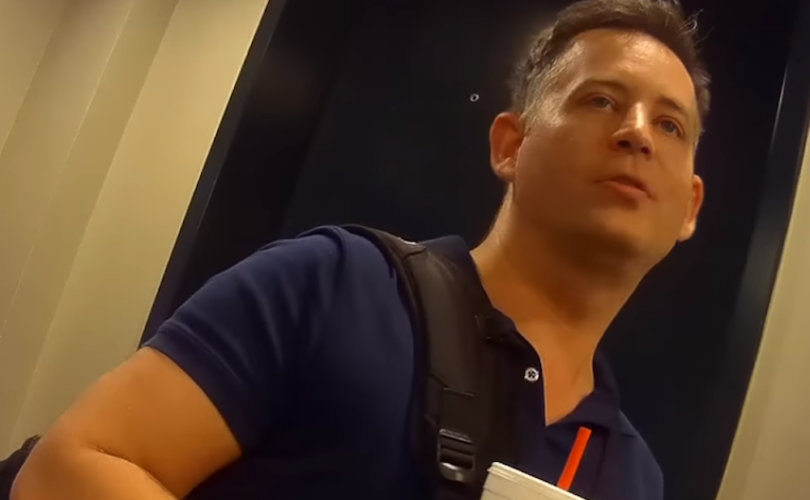 ATLANTA, Georgia, June 29, 2017 (LifeSiteNews) — A CNN producer acknowledged in an undercover video that the cable news network has been creating fake news against President Trump for the past five months.

In a video released by Project Veritas, CNN supervising producer John Bonifield admitted that stories about Russia colluding with the Trump administration have no factual proof. Bonifield has worked for CNN as a journalist and producer for 15 years.

As TMZ reported, “Bonifield says CNN doesn’t have the goods, but its nonstop coverage (about Russia) is all about attracting viewers. … It’s being covered to death for ratings.”

Produced and narrated by James O’Keefe, founder of Project Veritas, the video indicates that CNN makes news decisions to cater to their liberal viewers. “Our goal is to expose the real motivations behind the decision-making process at our dominant media corporations,” he said.

A Project Veritas journalist visited Bonifield and videoed their conversation about bias and corruption within the mainstream media.

O’Keefe explained that Bonifield unknowingly “gave us a window into the editorial bias and anti-Trump agenda of the (CNN) organization.”

“One story has monopolized President Trump’s time in office like no other, especially on CNN: Russia,” O’Keefe narrated. He noted that in the last five months CNN has mentioned Russia on the air 15,694 times.

Asked why CNN is giving so much coverage to the alleged Russian interference in last year’s election and trying to tie it to Trump, Bonifield replied, “Because it’s ratings.”

Bonifield admitted that the whole Russian story “could be bull***t.” “It’s mostly bull***t now (because) we don’t have any big giant proof.”

“But then they say, ‘Well, there’s still an investigation going on,’” but “If you were finding something, we would know about it,” Bonifield reasoned.

He said CNN doesn’t have any proof, “but they want to keep digging.” Then the news producer went so far as to say President Trump is correct in his assessment that CNN is on a blind “witch hunt” against him.

“And so I think the president is right to say, ‘Look, you are witch hunting me,’” Bonifield admitted. “‘You have no smoking gun, you have no real proof.’“

“Bonifield says CNN loves the Russia story not because it’s true but because (their viewers) want it to be true,” O’Keefe charged. “They are feeding their audience a false narrative in order to get ratings.”

“The Russia story and Trump have made CNN millions,” O’Keefe explained. He also revealed that merely one day after the U.S. pulled out of the Paris Accord — arguably the biggest story of the year so far — CNN’s CEO Jeff Zucker announced in an internal meeting, “Let’s get back to Russia.”

The CNN producer went on to explain that the global news giant decides its coverage not based on facts or importance but on ratings and popularity. “It’s a business. People are like, ‘The media has an ethical … ’” Bonifield scoffed, literally. “All the nice cutesy little ethics that used to get talked about in journalism school you’re just like, ‘That’s adorable. This is a business.’“

The veteran news producer also admitted that CNN has attacked President Trump incessantly but had a completely different “hands off” standard for President Obama.

Bonifield noted that “a lot of liberal CNN viewers” want to see criticism against Trump, but they did not want to hold Obama up to scrutiny. “I think if we would have behaved that way with President Obama and scrutinized everything that he was doing with as much scrutiny as we apply to Donald Trump, I think our viewers would have been turned off. I think they would have felt like we were attacking him (Obama).”

Bonifield also put the alleged hacking in perspective, pointing out that even if the story for which CNN has no proof is true, he said the U.S. interferes in elections and governments around the world on a regular basis since World War II. “We try to swing their elections,” he admitted. “Our CIA is doing s**t all the time. We’re out there trying to manipulate governments.”

The Project Veritas video concludes that Americans “cannot trust” the mainstream media because of “its corporate greed, market pressures, managers without integrity, newsroom bosses without courage, journalists who don’t even leave their desk.”

“Their enthusiasm to report false news is getting the better of them,” O’Keefe charged.

On June 22, CNN had to retract just such a story linking Anthony Scaramucci with investigations into the Russian Direct Investment Fund. Three CNN staffers resigned because of the fake news, and CNN publicly apologized to Scaramucci for the slanderous scandal their falsehood created.

Project Veritas promised that there will be more exposes on “the broken, rotten media machine.”

“To report not on facts but instead on narratives that yield high ratings is exactly the definition of fake news,” O’Keefe concluded. “We said we are going after the media, and there is a lot more to come.”

O’Keefe is no newbie to undercover video journalism. In 2006, he and Lila Rose, founder of Live Action, recorded Planned Parenthood officials colluding to cover up statutory rape.

A year later, O’Keefe recorded phone calls he made to Planned Parenthood, posing as a benefactor and asking the abortion business if his donations could be targeted to pay for killing black babies. Planned Parenthoods in seven states agreed to the racist request.