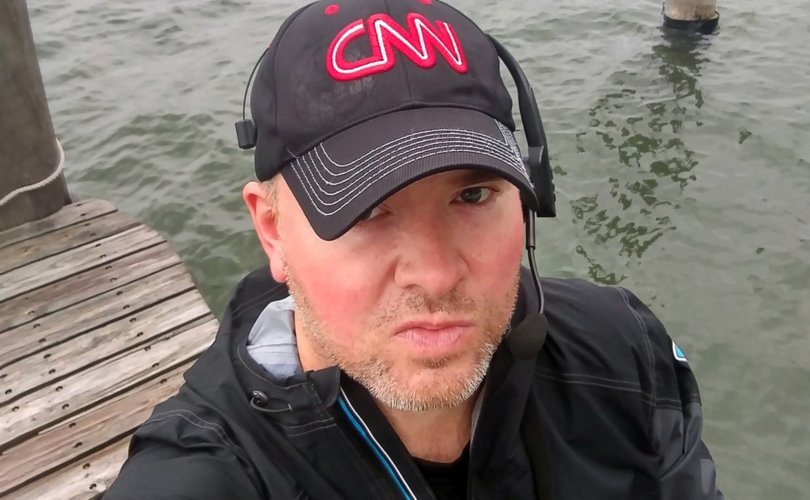 (LifeSiteNews) — A senior producer for CNN was taken into custody on Friday by the FBI on federal charges of enticing young girls to engage in illegal sexual activity, for which he could face at least 30 years in prison.

John Griffin, 44, who had produced the CNN morning program “New Day,” was suspended from the news organization after his arrest and fired from the network on Monday.

In a statement announcing Griffin had been fired, a CNN spokesperson said, “The charges against Mr. Griffin are deeply disturbing.”

“The charges against Mr. Griffin are deeply disturbing.”@CNN confirmed it has fired #JohnGriffin, a long-time staffer producer who was indicted last week under the charges he tried to lure minors for sex. https://t.co/S0hfFu3EUp

During his eight-year tenure at CNN, Griffin had reportedly worked closely with recently-fired CNN pundit Chris Cuomo, who co-anchored “New Day” from 2013 to 2018.

Cuomo was terminated by the outlet on December 4 after reports emerged that he had helped his embattled brother, former New York Gov. Andrew Cuomo, to conceal sexual harassment allegations that led to his ouster in August.

The federal charges against Griffin stem from a recently unsealed federal indictment alleging that the former CNN staff member had coerced parents “to allow their minor daughters to engage in sexual activity in his home,” and had “sexually trained girls as young as 7 years old,” Fox News reported.

A Vermont grand jury has charged Griffin “with three counts of using a facility of interstate commerce to attempt to entice minors to engage in unlawful sexual activity,” with each count carrying a mandatory minimum of 10 years in prison.

The unsealed indictment filed Thursday provides disturbing details of Griffin’s alleged crimes and communications, including text messages allegedly sent to the mother of two girls, ages nine and 13, in which he stated that “When handled appropriately, a woman is a woman regardless of her age,” and encouraged the woman to ensure the 13-year-old was “trained properly.”

“One of the big lies of this society is that women are delicate innocent angels and they are in actuality, naturally, the dirtiest sluts possible, in EVERY metric,” Griffin also allegedly said.

CNN reported that Griffin had allegedly paid for and kept an online profile on a sexually explicit website for several years.

According to the U.S. Attorney’s Office in Vermont, Griffin’s activities were not limited to online communications. Last year, he allegedly paid for plane tickets to transport a mother and her nine-year-old daughter to his house, where the girl was directed to and did perform unlawful sexual acts.

In a Friday statement, the U.S. Attorney’s Office in Vermont wrote that Griffin “sought to persuade parents to allow him to train their daughters to be sexually submissive.”

“Griffin later transferred over $3,000 to the mother for plane tickets so the mother and her 9-year-old daughter could fly from Nevada to Boston’s Logan airport. The mother and child flew to Boston in July of 2020, where Griffin picked them up in his Tesla and drove them to his Ludlow house. At the house, the daughter was directed to engage in, and did engage in, unlawful sexual activity,” the statement continued.

Part of the statement includes a suggestion that the “parents” of the children allegedly targeted by Griffin may not have been their real parents, noting that the former CNN producer “ … utilized the messaging applications Kik and Google Hangouts to communicate with people purporting to be parents of minor daughters.”

The statement added that the federal indictment against Griffin “includes specific allegations that Griffin attempted to entice two other children over the internet to engage in sexual activity,” with the accused allegedly proposing a “virtual training session” in April 2020 in which he would give lewd sexual instructions to a mother and her 14-year-old daughter.

Additionally, in June 2020, according to the U.S. Attorney’s Office in Vermont, Griffin “proposed to a purported mother of a 16-year-old daughter that she take a ‘little mother-daughter trip’ to Griffin’s Ludlow ski house for sexual training involving the child.”

It’s unclear to what extent Chris Cuomo was aware of the alleged activities of his former colleague.

The New York Post pointed out that Griffin had “bragged on LinkedIn about working ‘shoulder to shoulder’” with Cuomo, and “seeing him through each show,” while Griffin’s Twitter page contains repeated posts in which Griffin tagged Cuomo or retweeted Cuomo’s messages, including one tweet in which Griffin referred to himself and Cuomo as “the other ‘twin brothers.’”

The other “twin brothers”– I promise, we ARE actually working… @ChrisCuomo @NewDay @CNN #WorldCup2014 pic.twitter.com/1vmRmuwa8V

After Cuomo’s firing from CNN, the younger brother of the former New York governor has been hit with sexual misconduct allegations himself, with multiple women claiming he engaged in inappropriate sexual behavior and made lewd remarks. Cuomo has denied the allegations.