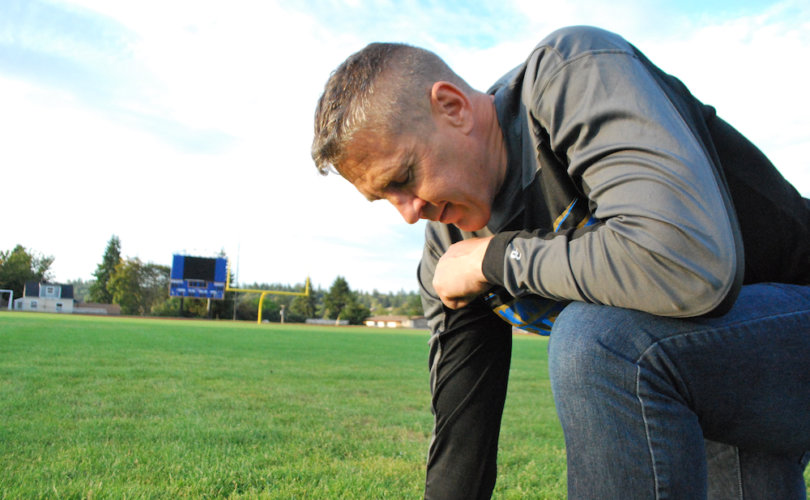 BREMERTON, Washington, August 28, 2017 (LifeSiteNews) — A three-judge panel known for liberal decrees ruled that no school employee may silently pray in view of others.

A panel of the Ninth Circuit Court of Appeals determined Bremerton High School assistant football coach Joe Kennedy does not have the right to pray silently at the 50-yard line after a game. Such silence is not constitutionally protected because Kennedy was acting as a public employee, the ruling stated.

“Kennedy was sending a message about what he values as a coach, what the district considers appropriate behavior, and what students should believe, or how they ought to behave,” Judge Milan Smith wrote. All three judges were in agreement.

Any expression of faith is prohibited on school grounds, Smith explained, except by students. He claimed that Kennedy taking a knee “can promote disunity along religious lines, and risks alienating valued community members from an environment that must be open and welcoming to all.”

Kennedy also led players and coaches in locker-room prayers before and after games.

Smith took another jab at Kennedy, stating that the coach “took advantage of his position to press his particular views upon the impressionable and captive minds before him.”

The coach was seeking his job back.

Kennedy, a former Marine, began taking a knee after games in 2007. Students and parents — sometimes from the opposing team — joined him at the 50-yard line.

No one complained until an employee from another district mentioned it to a Bremerton district official. The district launched an investigation and told Kennedy to only pray after  players had gone home and the field was empty. He complied for a while but then went back to his silent but publicly-seen prayer after games.

A Satanist group challenged the activity, offering to pray after games, too.

District administrators ordered Kennedy to stop. He refused and was put on paid leave until the end of the year when his contract was allowed to expire.

Kennedy sued for his First Amendment rights with the help of First Liberty Institute of Plano, Texas. “Banning all coaches from praying individually in public just because they can be seen is wrong,” First Liberty president Kelly Shackelford said.

First Liberty's Jeremy Dys accused the Ninth Circuit panel of “effectively saying it is unconstitutional for a coach to make the sign of the cross or bow his head in prayer when a player is hurt.”

“That is not the America contemplated by our Constitution,” he told the Kitsap Sun.   “Now a coach can't even bow his head,” he told The Seattle Times.

Support Coach Kennedy and his right, together with his young players, to pray on the football field. Liberty Institute just suspended him!

Kennedy and First Liberty are considering what to do next. This week's ruling was the second time Kennedy was turned down on appeal. They could request the same panel to reconsider, ask for a hearing before the full court, or appeal to the U.S. Supreme Court.

The internet is abuzz with opinions on the ruling. “If Coach Kennedy wanted to host a transgender support group at the 50-yard line, that would be protected speech,” one commenter wrote. “Liberals value free speech quite highly, until that speech does not agree with their values.”

Opinions were also offered on possible future appeals. “The Supreme Court of the United States should make fast work of this egregious violation of Coach Kennedy's constitutionally protected rights,” Sean McGrew commented. He pointed out that the Ninth District Court of Appeals has been overturned by the U.S. Supreme Court 79 percent of the time.

Matt Sharp of the Alliance Defending Freedom commented about a similar case:  “Teachers and other public school employees do not leave their constitutionally protected freedoms at the schoolhouse gate. There’s no legitimate basis for schools to prohibit their employees from engaging in expression outside of school hours or from showing respect for students’ religious expression while at school.”

“Courts have repeatedly held that a school’s faculty and staff have certain constitutional rights to engage and participate in religious expression before and after their contracted work times without violating the Establishment Clause,” Sharp explained.