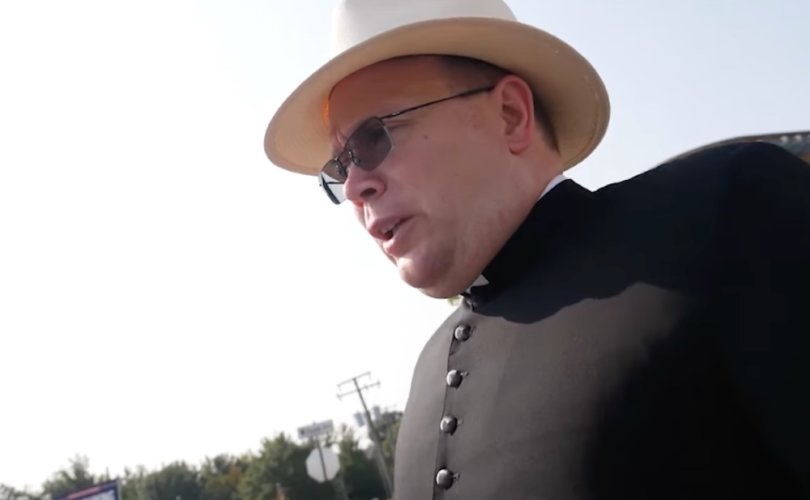 ARLINGTON, Virginia (LifeSiteNews) – Pope Francis is “pushing a globalist, leftist agenda,” a co-founder of the Coalition for Canceled Priests told Breitbart on Saturday during a national walking pilgrimage for the Traditional Latin Mass.

“We saw that in his recent visit to Kazakhstan with this one-world religion,” Father John Lovell told Breitbart’s Matthew Perdie, referencing an ecumenical document stating that God wills “differences in religion” which the pontiff recently signed. The actual text of the document, which appeared to contradict Catholic teaching, was then quietly updated several hours later – after the religious leaders had given their assent to it, and after it had been publicly pronounced during a livestream.

“We’re also seeing it in a lot of the cardinals that he’s appointing and the bishops,” said Lovell. They are “very much pushing a modernist agenda, sadly.”

Lovell walked alongside Catholic pilgrims as they prayed the rosary, sang hymns, and solemnly processed from Arlington’s Cathedral of St. Thomas More to Washington, D.C.’s Cathedral of St. Matthew the Apostle. The Diocese of Arlington and the Archdiocese of Washington recently announced their implementations of Traditionis Custodes, measures that will harshly crack down on the flourishing Traditional Latin Mass, and the pilgrims were mourning their loss (and expressing thanksgiving for Summorum Pontificum, Pope Benedict XVI’s now-canceled motu proprio making the ancient Mass more widely available after decades of suppression and liturgical abuse following the Second Vatican Council).

Thanks to Traditionis Custodes, the Traditional Latin Mass is now available in only three parish churches in the Diocese of Arlington, previously known for its high number of diocesan priests who offer the Old Mass in addition to the Novus Ordo, plus five segregated, non-parish “locations.” The Archdiocese of Washington has banned the Old Mass in parish churches entirely – which is almost certain to cause parishes to close – relegating it instead to the Franciscan monastery in the nation’s capital, and a chapel and mission church in Maryland.

In Europe and the U.S., “the only viable growth in the Church right now is in the Traditional Latin Mass movement,” said Lovell, lamenting that the Old Mass is being restricted “across the world” thanks to the Church hierarchy.

The Coalition for Canceled Priests offers practical support to priests, religious, and seminarians who have been “canceled” or unjustly persecuted by their bishops or superiors.

“Cancel culture is not just in the general society, it’s also in the Church,” said Lovell, who was “canceled” by the Bishop of Rockford in 2012 and has spent a decade fighting for his good name. “The canceled priests are not priests that have done something wrong” but have drawn the ire of the hierarchy for following Church doctrine and preaching against abortion or contraception and “standing up for traditional Catholic values and teaching.”