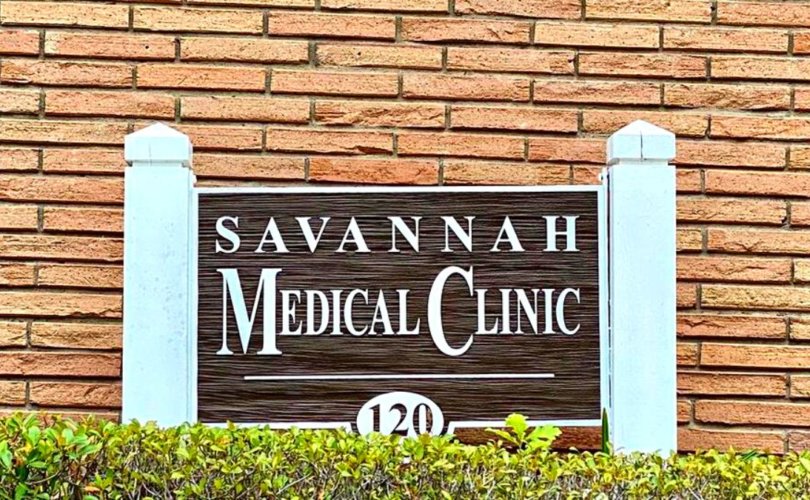 (LifeSiteNews) — Savannah Medical Clinic is permanently closed after 40 years of operation, eliminating access to surgical abortions in coastal Georgia and the surrounding regions.

As of June 24, the nearest surgical abortion providers are in Augusta, Georgia and Jacksonville, Florida, according to an article published by Georgia Public Broadcasting. Some centers, including Planned Parenthood, continue to offer abortion pills in Savannah for the time being.

“This is a huge win,” Dr. Kandiss Taylor, pro-life candidate for Georgia governor, told LifeSiteNews. “The first domino fell in GA without our Governor calling a special session and allowing the legislators to put abortion/murder to a vote. A huge precedence has been set with this closing.”

Although her hopes to be elected governor in 2022 were dashed in the primary in May, Taylor continues to use her background in counseling and public education to fight for life in her state. Regarding the recent closing in Savannah, Taylor pointed out that while convenient access to abortion is diminishing, there is still an urgent need for the state’s lawmakers to “be afforded the opportunity to come together and vote to rid GA of abortion completely.”

Georgia pro-lifers celebrate the closing of the provider while also acknowledging that there is still more work to be done in the state.

“The closing of Savannah Medical Clinic is definitely a move in the right direction for the pro-life community,” Ruth Prohaska, a local resident, told LifeSiteNews. “However, there are many more providers within the state still ‘open for business.’”

Prohaska is a wife and mother of three in Augusta. For nearly 20 years, she has served the pro-life mission in a variety of ways, including volunteering with Georgia Right to Life (GRTL) and praying outside abortion clinics. Her experience has offered insight into the culture instigated by the abortion industry.

“Many people are surprised to hear that ‘clinics’ are busier than a supermarket on a Saturday morning, believing that abortion is ‘rare,’” Prohaska continued. “But in today’s world it is being used as birth control.”

In 2019, Georgia passed its “Living Infants Fairness and Equality (LIFE) Act,” also known as the “Heartbeat Bill,” which banned most abortions once a heartbeat is detected, roughly six weeks into a pregnancy. However, the bill was never put into effect due to federal courts blocking it as unconstitutional.

Since the Supreme Court’s reversal of the original Roe v. Wade ruling, Georgia’s law could go into effect at any time. However, the bill would not ban abortion unconditionally.

“A special session must be called by Governor Kemp to allow the legislators to vote and end abortion,” Taylor told LifeSiteNews. “The Heartbeat Bill is the established law and was intended to limit access to abortion in GA. In reality, the bill does little to no limiting as the woman must have the heartbeat taken to prevent the abortion from commencing. If the woman doesn’t take the heartbeat, the abortion is legal. This must be changed immediately.”

After the Dobbs decision, states have been limiting abortion access in varying degrees from complete bans to six-week or “heartbeat” bans, similar to Georgia’s LIFE Act.

Although abortion remains accessible and legal in certain forms, locations, and periods of pregnancy in Georgia, the closing of Savannah Medical Clinic offers encouragement to local pro-life supporters to push forward in their efforts.

“We need to continue the fight in each and every state,” Prohaska stated. “GRTL had a press conference just this week to ask the Governor of Georgia to call a special session to adopt the Personhood Amendment. GRTL has created a petition for citizens to sign to notify the governor and our legislators that the people of Georgia are pro-life!”

The Personhood Amendment is a resolution for the state to protect human life at all stages of development.

Jean Mondoro is an editorial intern at LifeSiteNews.