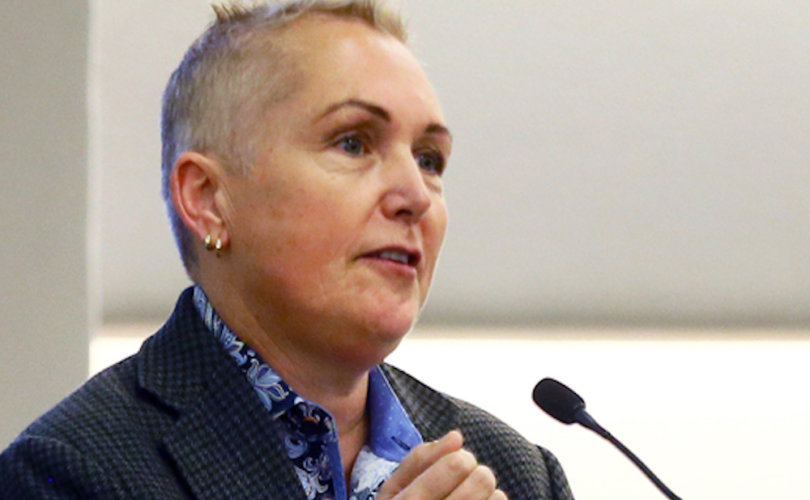 The student who took a fourth-year course at the University of British Columbia from Mary K. Bryson in 1991 told National Post columnist Christie Blatchford she had taken other women’s studies courses but never been in a class “where misandry was taught to you.”

Bryson, a senior associate dean and professor of education at the University of British Columbia, was one of two people brought in for a forum this month at the University of Toronto to challenge psychology professor Jordan Peterson’s claims that federal and provincial human rights legislation and U of T anti-discrimination measures were dangerous attacks on free speech.

The other opponent to Peterson’s actions confined herself to trying to prove that Bill C-16, which would protect transgender and gender-fluid persons from hate speech, was a reasonable measure. But Bryson engaged in ad hominem attacks on Peterson for using his privileged position to attack “the precarious minority” of “transgender and gender-fluid’ persons. He did this, she said with assertions that had never been submitted to the scrutiny of “peer reviewed journals,” and was therefore “in total dereliction of his academic duty.”

But as Blatchford revealed in a front page column in the Friday’s National Post, Bryson “now stands accused of bullying heterosexual and bisexual students in a 1991 course called “From the Margins: Lesbian Subjects Matter.”

The student, reports Blatchford, claimed that “Bryson forced the students to declare their sexual orientation, liked to spring ’violent pornography’ on them and taught them that ‘all sex with men is inherently violent.’”

Bryson, through her lawyer, has denied she forced her students, who were all female, to reveal their sexual orientation or that she taught all sex with men was violent.

The complaining student, who contacted Blatchford after the columnist wrote about Peterson’s debate with Bryson, graduated from UBC with a Master’s in Religious Studies. She says Bryson and her co-teacher, Suzanne de Castell, mocked “those of us who liked men, who had intimate relations with men” for shaving their legs or wearing skirts.

“Imagine,”she told Blatchford, “a male professor forcing female students to watch violent pornography” or “inviting a male guest speaker to drop his pants and expose himself to students … or telling students how to dress for his class and forcing them to publicly announce their grooming habits and their sexual orientation.”

While Bryson, via her lawyer, denies all coercive activities, her own description of the course, in an essay she wrote with de Castell in 1993, reveals a thorough enough knowledge of the distribution of sexual preferences among her 15 students for her to make value-laden judgments of how the three different preferences (hetero-, homo- and bi-sexual) affected class performance.

The heterosexual students, it was clearly the instructors’ view, just didn’t get it. “Only the students whose lives were constructed within oppression … could effectively engage in the work we had prescribed for our course.” The heterosexuals, in other words, treated lesbianism as an academic subject while the lesbian and bisexual students treated it as a chance to team up for class projects and after-class social alliances.

Students were subjected to a parade of presenters from Vancouver’s dense LGBT culture and assigned activities such as using the popular game show Jeopardy as a model for a “pseudo-positivistic, overtly ironic game of ‘Facts We Know about Lesbians.’”

Students had to use another show, the Dating Game, as the framework to parody the standard Women’s Studies survey course on lesbians through history by imagining a date between lesbians of different eras.

Bryson, through her lawyer, got in one last shot at Blatchford, calling her “homophobic, transphobic [and] anti-feminist.”