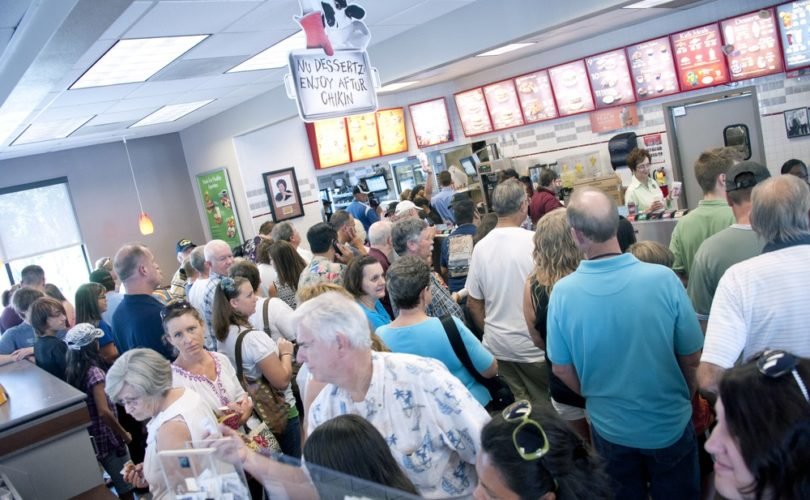 KEARNEY, Nebraska, February 24, 2016 (LifeSiteNews) – A “small cohort” of students at the University of Nebraska Kearney (UNK) stopped Chick-fil-A from opening on campus by complaining about the marriage view of Chick-fil-A's CEO.

In January, the student body voted Chick-fil-A the most wanted restaurant for their campus, but a few students who object to traditional opinion successfully fought the decision.

UNK student government president Evan Calhoun explained, “After hearing these concerns raised by a section of our student body, we concluded that these corporate values are not aligned with our values as a student body.”

Calhoun called Chick-fil-A CEO Dan Cathy's personal opinion in defense of marriage “discriminatory policies,” without elaborating on what specific policies he was referring to.

Chick-fil-A serves and hires without discrimination, but the popular chicken franchise came under fire from LGBTQ activists when CEO Cathy in 2012 shared his personal view on government attempts to redefine marriage to include same-sex couples.

Off the cuff, Cathy quipped, “I pray God's mercy on our generation that has such a prideful, arrogant attitude to think that we have the audacity to define what marriage is about.”

There are also UNK students on campus who disagree with the vote to bring Chick-fil-A to campus being unilaterally reversed by president Calhoun. They consider the reversal a denial of the student government's democratic process, against the student body's will, and discriminatory against Cathy's First Amendment rights.

“I think it is ridiculous and appalling that this is a situation we are faced with as a campus and student body, due to the preconceived notions of a very small minority,” UNK student Trevor Wiegert protested in a letter to the UNK student senate. “This is a country that was built and has thrived on the notion of free speech.”

Wiegert charges that the group that fought Chick-fil-A was a small cohort of students, unrepresentative of the UNK student body.

Wiegert wrote, “Taking a man's opinion on his belief in the traditional family and construing it to supposedly encompass his entire company's corporate values … in order to feel 'safe' or like you're not being 'persecuted' is simply asinine.”

UNK student Aaron Ohri responded to Calhoun's reversal on Facebook, posting that it “is a complete and total slap in the face to many of us on this campus who believe that Chick-Fil-A is not wrong in what they believe.”

“I understand that a Christian lifestyle in this day and society is completely 'disrespectful,' but please do not ever again send me an e-mail speaking for the 'whole student body' when you do not have a clue what most of us actually think,” Ohri wrote.

In response to the criticism of Calhoun's unilateral reversal, the student government is holding a forum on the controversy and is expected to make a final decision next week.

Because of its Christian CEO's views, Chick-fil-A has been banned from opening on campuses, or resolutions have been passed calling for the restaurant to leave campuses, at Johns Hopkins University, Elon University, Emory University, Davidson College, Southern Illinois University-Evansville, the University of New Mexico, New York University, and Wichita State University.