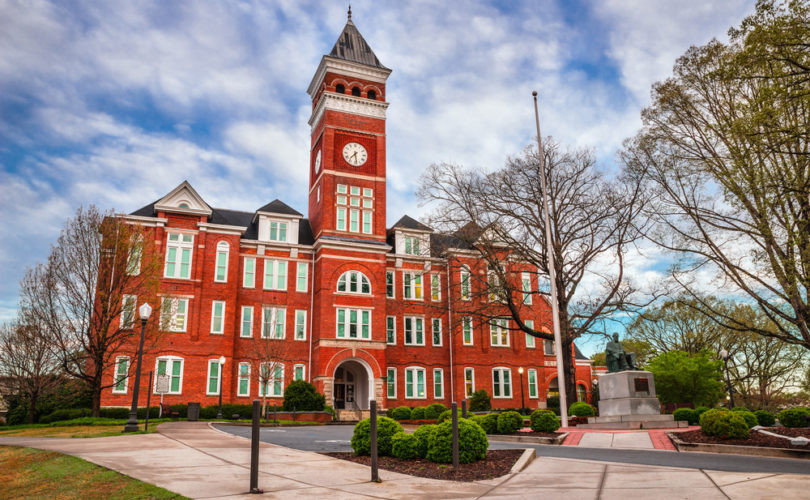 COLUMBIA, South Carolina (LifeSiteNews) – The College Republicans chapter of Clemson University is speaking out against the school for hosting a drag show “chock-full of sexual degeneracy” last weekend that “spits in the face of” campus Christians.

Saturday, April 8 saw the ninth annual Clemson Drag Show, which organizers including the Clemson LGBTQ+ Alumni Council describe as an event to “laugh, learn, and embrace an entire spectrum of possibility,” featuring “Clemson students in an amateur portion in addition to a wide range of professional performers from around the country.”

“Many of the event’s participants promote transgenderism and other deviant forms of sexual licentiousness,” Clemson CR’s statement reads. “The Overton window has been pushed so far left that these people are viewed as cultural icons, but in reality, they are nothing but iconoclasts. Drag and transgenderism promote sexual perversion and the degradation of the moral principles which have set this country apart from the rest of the world.”

The statement noted that various student-body organizations, including  TigerLive, CUSG, and the Gantt Center, “have sent a plethora of emails advertising this event, as well as other LGBT activities,” for which there is no student opt-out, which the group takes as a sign “that the normalization of this type of behavior is the goal of many student organizations and university officials alike.”

“While we recognize the right of student organizations to express their ideologies on campus, it is the responsibility of Clemson University to remain impartial regarding such events,” the statement argues. “TigerLive is an official university affiliated student organization whose mission statement includes ‘TigerLive Entertainment creates a sense of belonging for Clemson students and builds campus pride in a welcoming and accessible environment.’ We believe that hosting events like the drag show runs counter to this mission as it alienates the conservative population at Clemson and does nothing to bolster campus pride.”

The statement sparked bitter denunciations from various campus groups, including Clemson College Democrats and Youth Democratic Socialists of America, as well as a statement by Miller “encourag[ing] us all to be thoughtful in our interactions with each other that could be deemed hateful and disrespectful to one’s particular viewpoint. Although we may not agree with individual viewpoints or choices, let’s be civil with each other.”

In a follow-up statement, the College Republicans stood by their words, declaring they “will never apologize for taking a stand against anything we believe to be immoral or perverse,” and condemning reactions to them that have crossed the line from disagreement into calls for “our banishment from Clemson University” and “physical aggression and violence against us personally.”

🚨RESPONSE TO THE GENERAL PUBLIC:🚨

Clemson University is no stranger to controversy.

In 2018, Clemson philosophy professor Todd May wrote in The New York Times that because “human beings are destroying large parts of the inhabitable earth and causing unimaginable suffering to many of the animals that inhabit it,” extinction of the human race “might just be a good thing.” Three years earlier, Clemson football coach Dabo Swinney rejected an award for his charity work from the Palmetto Family Council because LGBT activists attacked the group’s disagreement with same-sex “marriage.”