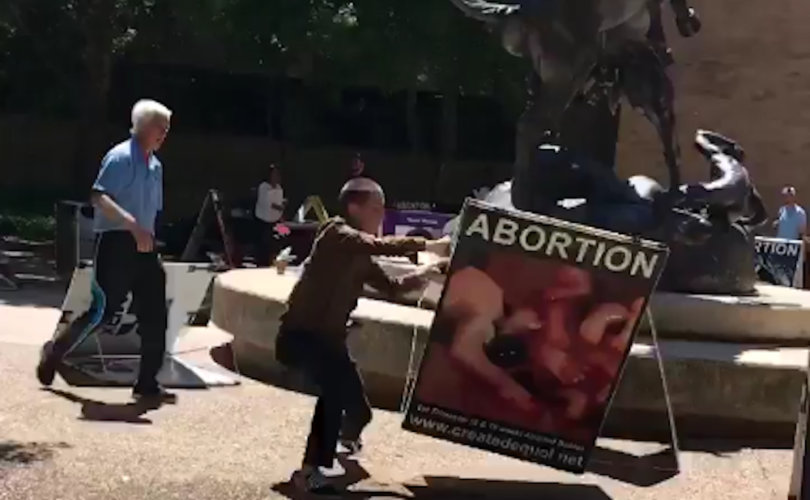 Kristan Hawkins of Students for Life says pro-life groups are being attacked more than ever on college campuses because 'our opponents know we're winning.'Emma Brockway / Twitter

SAN MARCOS, Texas, April 7, 2017 (LifeSiteNews) – A Texas State University student who prides himself on tolerance punched, kicked, and tore up several pro-life signs while a local activist set them up in a central campus square.

Captured on video by several passersby, politics and government student Ian Ramos shouted obscenities at the unidentified pro-lifer and ran from sign to sign, knocking them over, kicking and punching them. Finally, he later told a reporter, he was calmed down by a professor and escorted to her office to avoid police.

“This is what you do when you can’t rationally defend your position,” said Gregg Cunningham, founder of the pro-life Center for Bioethical Reform that was responsible for the signs with pictures of aborted babies. “You make sure the people with a contrary position don’t get an opportunity to even present it.”

Ramos later defended his actions to alternative news sources such as the Daily Caller and The Tab. Asked if he would do it again, he said, “Yeah. I am unapologetic about it. I think this kind of thing — I am a tolerant person and I believe in tolerance, but I do not have to be tolerant to bigots. It was just a reaction. In the long run, we want to be having constructive dialogues to change things, but in the moment I don’t regret what I did. I think I spoke for a lot of people.”

He also said, “I’m a pretty reasonable person. I’m a pretty objective person. I do have a bigger personality than other people, I think.” Ramos admitted the goal of the pro-life display, a yearly feature on campus, was to provoke discussion. However, “I didn’t really want to have a constructive dialogue with him. I just wanted to tell him what I thought about his fundamentalist propaganda.”

University spokesman Matt Flores told LifeSite, “The matter is under criminal investigation by the university police department as a case of criminal mischief.”

Megan Martinez, president of the university’s pro-life club, Bobcats for Life, saw Ramos’s display as a cry for help.

“Initially when I watched the video, all I could see in the young man is pain,” she told LifeSiteNews. “Personally, I don't think that an emotional reaction like that comes from simply being pro-choice, but makes me wonder if he has had past experience with abortion in his own life or in the life of a loved one that the signs triggered in him.”

Martinez said her group does not use explicit signs to avoid triggering people like Ramos.

“We know those images to be true of what abortion really is, [but] we know the trauma it can bring to those who have experienced abortion in some shape or form,” she said.

Cunningham said the incident exemplified the deterioration of intellectual freedom and development at American universities over the last 20 years since the California-based organization began its pro-life educational mission.

“Students were entreatable then. You could approach them and engage in debate. They were relatively analytical.” he said. “Today’s students have lost the ability to engage in complex analytical argument. They feel threatened by it. They are taught to personalize everything. If their beliefs are challenged, they feel personally attacked.”

He also connected the Texas incident to national politics. For abortion supporters and other social radicals, the pro-life movement has become a highly visible symbol of Donald Trump’ victory. “They see us a proxy for Trump. It’s not true. I opposed Trump myself,” Cunningham said.

Shawn Carney, president of 40 Days for Life, the Texas-based organization that coordinates pro-life vigils around the world in the fall and during Lent, also sees a political explanation for Ramos’ outburst.

”We have seen a dramatic increase in hostile reactions during this campaign,” he told LifeSiteNews. Not only are individual supporters of abortion yelling and harassing 40 Days vigil keepers, but “organizations are getting involved.” Police charged one woman whose attacks crossed the line at a California vigil site.

“It’s a reaction to the election of Donald Trump and even more to the defunding of Planned Parenthood [by the Trump administration,]” Carney said. “Planned Parenthood has literally been getting away with murder for eight years. Now they’ve lost their funding. It makes sense the world gets angry at us.”

Cunningham’s and Carney’s organizations both tell their volunteers and staff to avoid physical confrontation over signage or property. However, Cunningham said self-defense was certainly allowed, as was interceding to protect another volunteer from physical attack.

Cunningham, a lawyer, said public universities such as Texas State were bound by their own regulations to defend anyone exercising free speech on campus from harassment. The Center for Bioethical Reform has won several lawsuits against universities that did not intervene.

Another change in the past 20 years, Cunningham told LifeSiteNews, is that university administrators are now more afraid of being fired for upsetting their students than of being sued by CBR. He also said CBR might intervene at Texas State University if Ramos is not prosecuted.