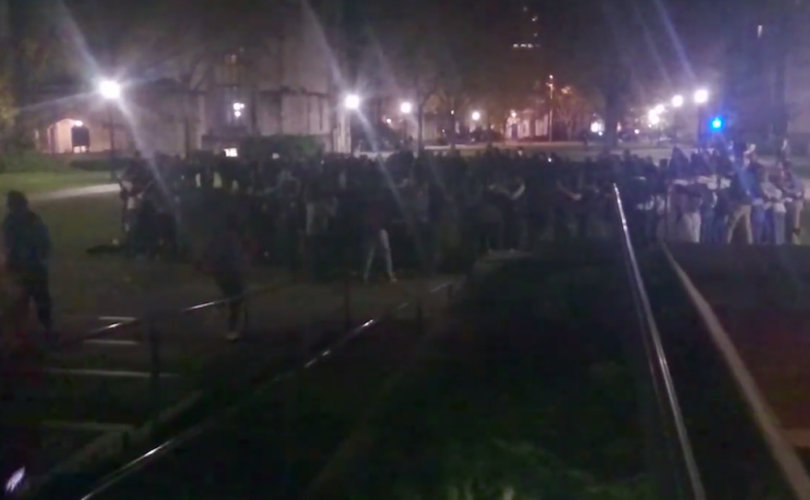 NEW HAVEN, Connecticut, November 11, 2016 (LifeSiteNews) — Liberal college students across the country are expressing such anguish over voters electing Donald Trump as president that they feel they shouldn't be required to take exams.

Students are begging instructors to postpone tests because “the stressful path” of the election has made “the majority of the student body … emotionally distraught and distracted.”

“I am fairly confident that it will be nearly impossible for anyone to focus,” one student pleaded.  He asked that exams be postponed “to preserve the sanctity and mental health of students.”

And professors are letting their little “snowflakes” off the hook.

The term “Snowflake,” or “Generation Snowflake,” refers to a hypersensitivity among young adults who were spoiled by their parents and brought up on the media and entertainment industry's message of their own “uniqueness” and “tenderness” that they become fearful when challenged and over-eager to take offense. Cambridge University's Andy Martin calls them “dangerous, anti-free speech, anti-democratic bedwetters,” and explains, “Parents cherished their offspring as 'precious little snowflakes,' each alike but unique, or 'everyone is special' as they sing in the cartoon South Park. When those smothered infants grew into adults, they were lampooned by the same parental generation for melting at any small amount of difficulty.  Martin's very humorous yet all-too-true Snowflake Test is here.

At Yale, an economics professor made his exam optional.

“I am getting many heartfelt notes from students who are in shock over the election returns,” he wrote to his students, many of whom “fear … for their families” because Donald Trump won the election.

The Ivy League professor then laid out a plan to give students the option to take the exam or not, and have heavier grade weight given to their final.

American Conservative columnist Rod Dreher notes that the president of Muhlenberg College in Allentown, Pennsylvania, shared how he is “sensitive” to the many distraught, upset students and recommended special discussion groups “to be sensitive to the understandable feelings” of students.

“I encourage students who feel the need for support and counsel regarding the election to avail themselves of our counseling center,” President John I. Williams wrote. “Also, our chaplain will be available in Egner Chapel for the bulk of the day for students who want to reflect in that space and/or seek her counsel. I’m sure Rabbi Simon will also be available to our students.”

Dreher commented, “Oh, for heaven’s sake … really? These snowflakes wanted classes cancelled because the wrong guy won the presidential election? These grown men and women need counseling to face the headlines? Are the SJWs (“Social Justice Warriors”) and their coddlers trying to make me happy that Trump won, or what?”

The administration at Rhodes College in Memphis, Tennessee, wrote a concerned email to faculty, pointing out that “the results of the presidential election have generated uncertainties, confusion, fear, anxiety, and anger about what the election might mean for our community members.”

“(W)e have particular concern for those experiencing trauma and fear around the potential impact on themselves, their families, and loved ones,” the Rhodes email continued, and encouraged faculty to “provide space and time” for students to debrief and share their feelings of trepidation.

At Stanford, officials acknowledged “students, faculty and staff … have expressed uncertainty, anger, anxiety and/or fear following yesterday’s election.”  They advised, “The most important thing to do is to take care of yourselves,” and offered “staff, counseling and psychological services, faculty/staff help center, the office of religious life and our community centers” to help the distraught.

“Post-election reflections” were also scheduled at Stanford, including “What Matters to Me and Why” and “Contemplative Skills for Post-Election Reflection.”

Dreher noted that not everyone is freaking out. He quotes a friend, who is a Hispanic immigrant:  “A lot of Latino people, we know that Trump was really just saying that the immigration should be done the right way. We know he’s not really against us. Who hired all the Latinos to build his buildings? Trump. It’s not such a bad thing that he wants immigration by the rules.”