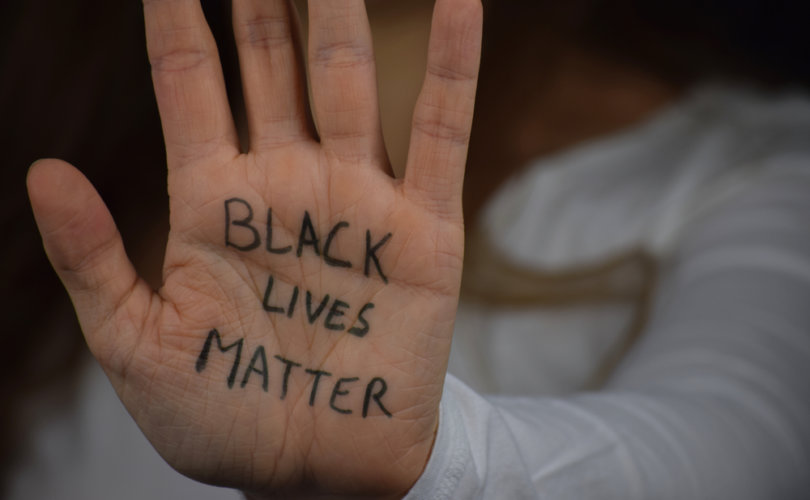 BLUEFIELD, Virginia, March 2, 2021 (LifeSiteNews) — Virginia’s Bluefield College has suspended a number of its basketball players after they repeatedly ignored the college president’s directive and knelt in during the national anthem. Kneeling while the anthem is sung indicates alignment with the violent Black Lives Matter rioters.

Bluefield College made headlines when ESPN reported that the college’s president, Dr. David Olive, had suspended multiple members of the college’s basketball team — an action that resulted in the forfeiting of its NAIA Appalachian Athletic Conference game against Reinhardt.

However, the move was not without some history. Olive had been made aware that at a home game against Bryan College on January 30, members of the men’s basketball team had knelt during the national anthem, and footage of the protest was shown on local television. After learning of the event via social media, Olive engaged in discussion with the vice president of the college, Tonia Walker, and Coach Richard Morgan. Morgan revealed that unbeknown to him, the team had been kneeling at their previous two away games.

At that juncture, Olive forbade the controversial practice, explaining that he was aware “how kneeling is perceived by some in our country, and I did not think a number of our alumni, friends, and donors of the College would view the act of kneeling during the anthem in a positive way.”

Olive also mentioned that players were representing the college when wearing its colors, and he “did not want Bluefield College contributing to the further divide; rather, I wanted the College to bring people together in a united effort to address issues of racial injustice.”

Despite Olive’s and Morgan’s instruction, players knelt once again at their February 2 game. At the February 4 game, they were kept in the locker room during the anthem to avoid a scene. The president subsequently met with the team for nearly two hours, explaining the prohibition on kneeling during the anthem. He warned that “their intended message in bringing awareness of racial injustices was being diluted or completely lost because some saw their act of kneeling as being disrespectful to the flag, our country, and to our veterans. In my opinion, their message was not being heard.”

In the discussion which took place, Olive mentioned that other ways to highlight racial concerns were raised in order to address the issue while respecting the flag. These included allowing the team to take “a knee during their introductions; the team taking a knee at tip-off.” The next away game was “uneventful” due to the team remaining inside during the anthem.

However, on February 9, in tandem with sudden media interest in the original January 30 footage, the team once again knelt during the anthem, which completely overshadowed a college press release on the same day attempting to explain the original footage.

After consulting with Walker, Morgan and the college trustees, on February 10 Olive made the much publicized, and criticized, decision to sanction all the players who had taken part in “violating College policy.”

While Olive has been criticized for what is being portrayed as a racist move, or an attack on free speech, he has defended himself against both points. “I continue to contend that we will not get to where we want AND NEED to get as a country in addressing these racial issues without making honest attempts at creating pathways that bring people together for a common cause,” he wrote.

“I will kneel with you anywhere at any time as an expression of my solidarity with you to bring about racial justice and equality, except during the National Anthem. I am with you. The College’s leadership is with you. With God’s help and his endless mercy and grace, we will make a positive impact in raising awareness of racial injustices and bringing about change,” he continued.

In his lengthy statement, the president also reminded the college that “[w]e are a private entity, not a governmental entity,” and as such students must conform to the college policy.

Referring to the practice of taking a knee during the anthem, Olive mentioned that he “heard and I understand the perspective” of players wishing to do that, but warned that it was counter-productive and risked their message being ignored completely. “I also know this form of protest immediately shuts down a number of individuals from listening to the intended message because of their perspective regarding the flag.”

— Article continues below Petition —
PETITION: Support priest who was suspended for calling out the Black Lives Matter organization
Show Petition Text
47688 have signed the petition.
Let's get to 50000!
Thank you for signing this petition!
Add your signature:
Show Petition Text

Fr. Theodore Rothrock, of the parish of St. Elizabeth Ann Seton in Carmel, Indiana, has been suspended by the ordinary of the Diocese of Lafayette, Indiana, Bishop Timothy Doherty.

It would appear that the only "offense" caused by Fr. Rothrock is to have strongly stated the truth, namely, that Black Lives Matter organizers feed off the fear they promote.

Please SIGN this petition which will go to Bishop Doherty and ask him to restore Fr. Rothrock to a position of leadership within the Diocese.

In a strongly-worded statement, posted to the parish's website (and now, subsequently removed), Fr. Rothrock said this of the organizers of the Black Lives Matter organization:

"The only lives that matter are their own and the only power they seek is their own. They are wolves in wolves clothing, masked thieves and bandits, seeking only to devour the life of the poor and profit from the fear of others. They are maggots and parasites at best, feeding off the isolation of addiction and broken families, and offering to replace any current frustration and anxiety with more misery and greater resentment."

Of course, Black Lives Matter organizers and their fellow travelers in the mainstream media, who have been promoting the overthrow of the nuclear family, the defunding of our police departments, and the general destabilization of our society, focused on Fr. Rothrock's impassioned use of the words "maggots and parasites."

And, while Fr. Rothrock has subsequently apologized for using those words, HIS WARNING REMAINS TRUE.

And, that is what a good shepherd does: He warns his sheep against serious dangers, while feeding and nourishing them with the truth.

The truth is that the Catholic Church condemns racism, saying that such discrimination is "incompatible with God's design." (CCC p. 1935)

But, Black Lives Matter and others revolutionaries are radically different to past civil rights movements in that they incite further racial strife rather than reconciliation.

As Fr. Rothrock pointed out in his statement: "Black Lives Matter, ANTIFA, and other nefarious acolytes of their persuasion, are not the friends or allies we have been led to believe. They are serpents in the garden, seeking only to uproot and replant a new species of human, made in the likeness of men and not in the image of God."

So, if Fr. Rothrock's words were strong, it is because we are facing into a dangerous and godless revolution. And, therefore, his words needed to be strong.

But, by suspending and silencing Fr. Rothrock, Bishop Doherty is giving in to people who fundamentally hate what the Church stands for.

Indeed, until the last few days, the Black Lives Matter website was calling for the destruction of both the nuclear family and "heteronormative thinking - the belief that all in the world are heterosexual."

Black Lives Matter is not a friend of the Church and any priest or bishop who thinks otherwise is being deceived, or allowing himself to be deceived or bullied.

This is not just an abstraction! This is a serious threat to Christianity and democracy, which needs to be met with strong opposition.

Thank you for SIGNING this petition to the bishop of Lafayette, Indiana, Bishop Doherty, asking him to restore Fr. Theodore Rothrock to a position of leadership in his diocese.

YouTube video in which Glenn Beck discusses the case of Fr. Theodore Rothrock who has been removed by his bishop for publicly criticizing Black Lives Matter - https://youtu.be/2c9KN5xMoCM

Olive’s warning about such a practice being counter-productive is not without some precedent. When NFL players widely adopted the practice, television ratings dropped.

Nor is his warning about the physical meaning of taking the knee founded in myth. The practice of taking a knee was promoted by San Francisco 49ers quarterback Colin Kaepernick in 2016, in apparent protest against racism and police violence. The gesture has quickly become a physical sign of allegiance to the BLM movement, which has gained great momentum since the death of George Floyd in May 2020, amid the subsequent violent riots which BLM members carried out.

As protestors and politicians around the world “took the knee” to demonstrate support for the BLM movement, and supposedly against police brutality, over 700 police were injured in the U.S. within the first month of protests alone.

Three months later, in September 2020, Axios reported that the damage in the U.S. resulting from the “mostly peaceful” riots had already amounted to between $1 billion and $2 billion. The figure was believed to be the highest insurance cost in the history of violent demonstrations — despite describing the BLM riots as “mostly peaceful.”

Indeed, in just one night in October, BLM rioters caused “tens of thousands of dollars” of damage in Los Angeles, as the protestors burned the American flag and graffitied a building with the words “kill more cops.”