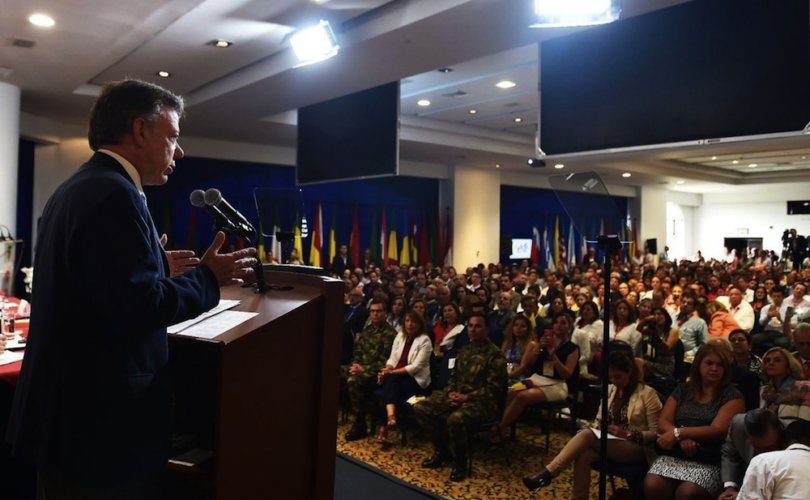 August 16, 2016 (LifeSiteNews) — Colombian President Juan Manuel Santos has cancelled all plans to impose “transgender education” on the nation’s schools after massive protests were carried out last Wednesday throughout the country.

“We just met with Cardinal Rubén Salazar, the Apostolic Nuncio, Ettore Balestrero, and Monsignor Fabio Suescún, the bishop of Colombia’s armed forces,” Santos said in a press conference held the day after the protests. “We clearly reiterated to these prelates of the Catholic Church — and we must make it clear to all religious confessions — that neither the Ministry of Education nor the national government has implemented, has promoted, or will promote so-called gender ideology.”

The booklet, produced in cooperation with the United Nations Population Fund and UNICEF, had sparked outrage throughout the country and was condemned by the Catholic bishops’ conference as well as Colombia’s attorney general. It led to the Wednesday protests that drew tens of thousands of outraged parents to the streets of several major cities, demanding an end to the program and the removal of Parody.

He added that the booklet, titled “Non-Hegemonic Sexual Orientations and Gender Identities in Schools,” “will not be authorized” for use by the Ministry of Education.

Colombia’s attorney general, Alejandro Ordóñez, expressed skepticism about the claims and told the press that “we parents will be vigilant” regarding what he sees as an attempt by the government to “indoctrinate” children with gender ideology.

“An education policy can’t be used to threaten and seek to take away the rights of parents to decide the education of their children,” he added, and warned that “the government must correct this because we parents are not going to permit them to continue developing education policy in this direction.”

Ordóñez has previously accused Parody of lying about the material she’s distributing to schools, and one of his prosecutors is now threatening to sue her over her claims that he fabricated evidence against her.

On the eve of the march, Parody accused the attorney general’s office of having circulated false “pornographic” images of pages from her gender ideology booklet, prompting a strong condemnation from prosecutor Carlos Meza Díaz, who said that her accusations were targeting him for tweets that never claimed to associate the images with the booklet. The attorney general’s office called for a retraction.

However, the following day, Parody refused to retract her accusations and reiterated them, prompting Meza Días to announce plans for a lawsuit against Parody.

On Wednesday, Meza Díaz told the El Heraldo newspaper that “the Minister this morning said that she’s not going to retract [her accusation], and that I’m the one who must ask forgiveness of the country. … She knows that I haven’t promoted any pornographic materials and that I haven’t carried out any campaign.”

Now Parody “will have to reflect” on her statements “and the judges of the Republic will make the determination” regarding her guilt, Meza Díaz said.

Parody expressed grief at the tens of thousands of demonstrators who took to the streets to denounce her gender ideology initiative and to demand her resignation, claiming it was part of a “strategy of manipulation and lies.”

“As a woman, as a Colombian, I am grieved by the insults that I heard in the protests that that were authored by groups of politicians who carried out this whole strategy of manipulation and lies,” she said. “Today the country had the opportunity to hear them.”

Parody said she would continue to seek to “create equality of opportunities in education,” and asserted her “commitment to make Colombia the best-educated country in Latin America.”