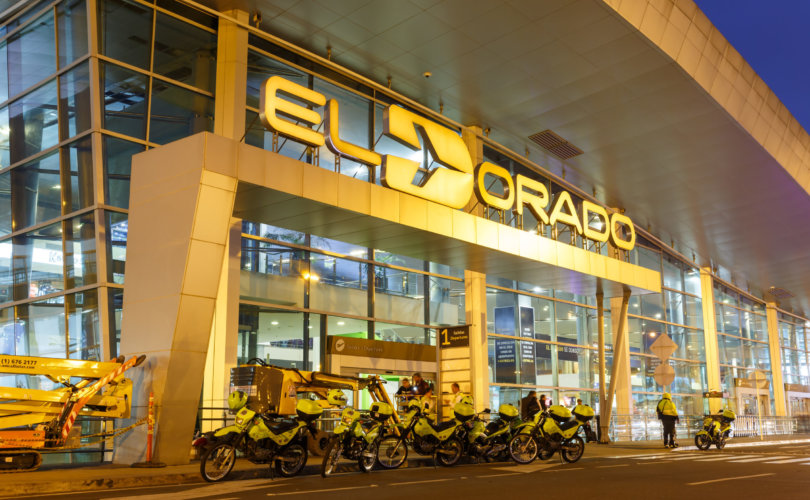 BOGOTÁ (LifeSiteNews) – A large crowd of Colombian Catholics prayed the Rosary at El Dorado International Airport in Bogotá last week in protest of the government’s decision to eliminate the airport’s longstanding Catholic chapel in favor of a “neutral” worship space.

According to Catholic News Agency, the large group gathered in the area beside the now-closed airport chapel on September 3, to pray the Rosary and plead with the government to reopen the forcibly closed sacred space.

The demonstration was led by Samuel Ángel, the president of the Solidarity Social Research Institute, who gave an impassioned speech just prior to the recitation of the Rosary.

“We live in a time in which calamities overwhelm and afflict mankind, and Colombia is no exception,” Ángel explained to his fellow Catholics at the rally.

“This accumulation of evils has invaded the earth because the majority of men have distanced themselves from Jesus Christ and his most holy law,” he continued.

“The religious discourse of the secular state, because it is religious but contrary to the faith and the reign of Christ, seeks to dismantle all traces of the presence of God. That’s the reason why we are here.”

In his concluding remarks, Ángel exclaimed: “Long live Christ the King! Long live the Virgin of Fatima! Let us restore the Catholic oratory!”

As reported by LifeSiteNews, El Dorado International Airport confirmed last month that the airport’s Catholic chapel has indeed been dismantled at the behest of the Secretariat of Government of the Mayor’s Office and is being turned into “a space for worship and neutral reflection” where “all religions will be welcome.”

The decision to erase the presence of Catholicism at the airport has been a source of controversy and intense backlash since the plan was first unveiled in April.

Bishop Juan Vicente Córdoba of Fontibón, the suburb of Bogotá where the airport is located, wrote a letter on April 11 informing the clergy under his purview that the legal affairs office of the government had left “written notification” that they were to “hand over the premises” in the airport at the request of the “board of directors.”

Two days later, Córdoba found out that the request had actually “been made by the Secretariat of Government of the Mayor’s Office of Bogotá” and invoked the “Ministry of the Interior’s regulations regarding equality of religions in Colombia.”

In Córdoba’s letter, he relayed that his lawyers attempted to use “all kinds of arguments” but to no avail, as the final “agreement” resulted in him having “to remove all the signs, symbols, icons, and liturgical elements so that they could arrange the premises in a neutral way for all the religions.”

Colombia, like many South American countries, was once considered a Catholic stronghold, with the nation professing the Catholic Church as the official church of the state until as recently as 1991.

Since Colombia’s departure from Catholicism on the state-level, left-wing revolutionaries has sought to usurp the Church’s role in political and social life, making immense strides in particular in the last year.

— Article continues below Petition —
PETITION: We won't give any money to liberal bishops who attack the Faith
Show Petition Text
10277 have signed the petition.
Let's get to 12500!
Thank you for signing this petition!
Add your signature:
Show Petition Text

In February, Colombia’s high court legalized abortion for the first 24 weeks of pregnancy, reversing the nation’s longstanding record as a pro-life country.

In May, Colombia also legalized euthanasia for non-terminal patients.

The current regime in power in Colombia, called the Humane Colombia party, is led by avowed leftist Gustavo Petro, who took power this year.

Far from Catholic like the majority of his countrymen, Petro is rumored to take part in occult practices, including “Pachamama” pagan idol worship.

When Petro was 17, he joined a guerrilla group called the 19th of April Movement, which was a paramilitary organization formed during a time of political turmoil preceded by fraudulent elections in the nation.

The 19th of April Movement stole one of Simón Bolívar’s swords from a museum in 1974 to symbolize the revolutionary goals of the organization. While there is evidence that Bolívar eventually had a change of heart with respect to his religious beliefs, he is known as one of the most prominent anti-Catholic revolutionaries in Latin America in the 19th century.