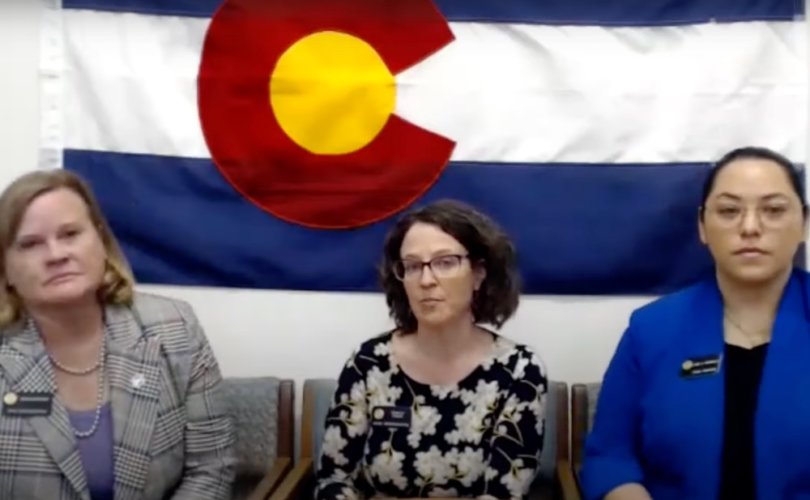 DENVER, Colorado (LifeSiteNews) — In the early hours of Thursday morning after a lengthy late-night session, a Colorado House committee voted to advance a radical new pro-abortion bill which would codify abortion up to the moment of birth as a “fundamental right” under Colorado law.

House Bill 1279, known as the Reproductive Health Equity Act, was approved by Colorado’s House Health & Insurance Committee just after 3:40 a.m. on March 10 in a 7-4 party-line vote.

Roughly 300 people signed up to testify for or against the measure during the public hearing, including former House Majority Leader Amy Stephens, a Republican, who told the committee that during her time in the legislature she had never come across a measure as “callous or barbaric toward the unborn” as HB 1279.

Using gender-neutral language associated with transgender ideology, a summary of the proposed legislation states that the measure would ensure that “every individual has a fundamental right to use or refuse contraception; every pregnant individual has a fundamental right to continue the pregnancy and give birth or to have an abortion; and a fertilized egg, embryo, or fetus does not have independent or derivative rights under the laws of the state.”

“This is about our right to make private medical decisions,” said Democratic Rep. Meg Froelich, one of the bill’s co-sponsors. “This is ensuring access and affirms that people have the right to control their own bodies.”

Catholic news site Crux reported the bill would allow “on-demand abortion for the full 40 weeks of a pregnancy,” as well as “[a]bortion based on discrimination of sex, race, or children with disabilities such as Down syndrome.”

The radical legislation would further “[r]emove the requirement that parents of minors be notified if their minor receives an abortion,” “[p]rohibit any regulation of abortion based on concerns regarding the health of the woman or baby,” and “enshrine in law” that an unborn child has no “independent or derivative rights under the laws of the state.”

Conservatives have blasted the radical pro-abortion proposal, which would deny even the most basic protections for Colorado’s unborn babies.

Jeff Hunt, Vice President of public policy at Colorado Christian University and director of the Centennial Institute, wrote in a Thursday tweet that “Colorado’s extreme abortion law joins America’s most shameful moments by codifying into law that preborn children have no rights in our state.”

Colorado’s extreme abortion law joins America’s most shameful moments by codifying into law that preborn children have no rights in our state. pic.twitter.com/GdTbrY1PIl

The Colorado Catholic Conference also slammed the bill, saying passage of the measure would make Colorado “the most radical abortion state in the country.”

Colorado already allows abortion at all stages of pregnancy. The new legislation is designed to prevent counties or municipalities within Colorado from enacting restrictions on abortion in the event the U.S. Supreme Court overturns Roe v. Wade.

The measure’s sponsors have affirmed the legislation comes in response to the Dobbs v. Jackson Women’s Health Organization currently on the docket of the U.S. Supreme Court.

With a decision expected as early as June, the crucial case could see the “constitutional right to abortion” asserted in the Court’s 1973 ruling in Roe v. Wade overturned, throwing the issue of abortion back to the states and local governments.

Colorado Politics reported that according to House Majority Leader Daneya Esgar, another co-sponsor of the bill, the potential for Roe v. Wade to be struck down this year makes it “critical” for Colorado legislators “to protect abortion rights.”

Accordingly, the bill explicitly prohibits government intervention in prohibiting or punishing abortion, standing in sharp contrast with the pro-life laws passed by some 19 states in recent months.

HB 1279’s summary notes the measure would prohibit both state and local public entities from “[d]enying, restricting, interfering with, or discriminating against an individual’s fundamental right to use or refuse contraception or to continue a pregnancy and give birth or to have an abortion in the regulation or provision of benefits, services, information, or facilities.”

The bill would also prevent the prosecution or punishment of women who obtain abortions in Colorado.

The prohibition comes in spite of the fact that even Texas, whose pro-life heartbeat law is one of the most expansive in the country, does not punish women who have sought or obtained abortions, instead targeting abortionists or others who aid a mother in aborting her unborn child.

Meanwhile, the Centennial State is already an outlier when it comes to lax abortion restrictions.

According to pro-abortion advocacy group NARAL’s Colorado chapter, the state “is one of the few” in which “a late abortion can be obtained.”

“Outpatient abortion is available up to 26 weeks” in Colorado, the group stated. “In addition, medically indicated termination of pregnancy up to 34 weeks is also an option for conditions such as fetal anomalies, genetic disorder, fetal demise and/or or [sic] severe medical problems.”

According to Colorado Politics, the state’s voters have long tried to maintain widespread access to abortion.

“Since 2008, Colorado voters have four times, and by wide margins, rejected restrictions or outright bans on abortions,” the outlet stated. “At the state Capitol, 44 bills have been introduced to do the same, including three in the 2022 session, all defeated.”

While many Republican-led states have moved to advance strong pro-life legislation in anticipation of the Supreme Court’s ruling in Dobbs v. Jackson, it’s clear that other states like Colorado will work to ensure pro-abortion laws remain on the books even if Roe v. Wade is overturned or constricted this summer.

Late last year, California’s radically pro-abortion Democrat Gov. Gavin Newsom announced the Golden State would become a “sanctuary” for abortion, promising to welcome women seeking to kill their unborn children who may live in states where politicians have banned or restricted abortion.

Similarly, New York Gov. Kathy Hochul, a self-professed Catholic, has also affirmed that her state would provide abortions for women traveling from pro-life states like Texas.

“For women in Texas, they need to know: we will help you find a way to New York and we are right now looking intensely to find what resources we can bring to the table to help you have safe transport here and let you know there are providers who will assist you in this time of your need,” Hochul said in a September 15 interview with MSNBC host Lawrence O’Donnell.

Since passing the House Health & Insurance Committee, Colorado’s radical new pro-abortion bill will now move on to the state’s full House for a vote.