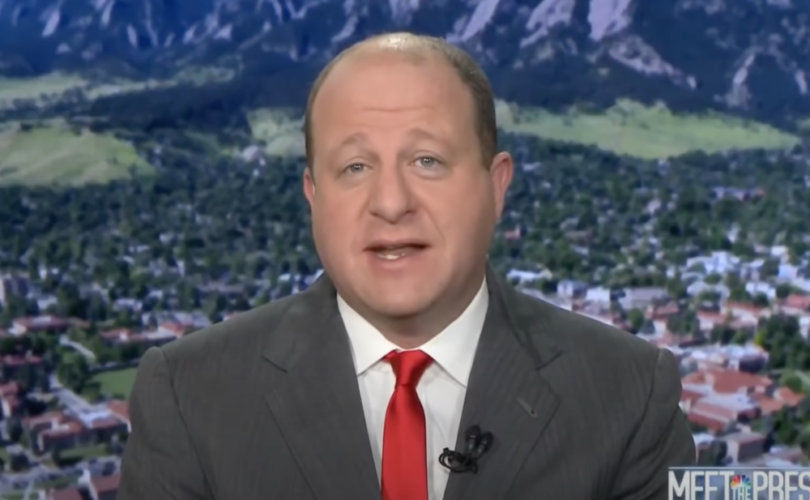 DENVER (LifeSiteNews) — Democrat Gov. Jared Polis of Colorado signed a bill into law on Monday that allows babies to be killed in the womb up until the moment of birth.

“No matter what the Supreme Court does in the future, people in Colorado will be able to choose when and if they have children,” Polis said at the signing ceremony in downtown Denver, referencing the possible reversal of Roe v. Wade in the coming weeks.

“We want to make sure that our state is a place where everyone can live and work and thrive and raise a family on their own terms,” the pro-abortion politician added.

The bill itself states that it will be illegal in Colorado to “deny, restrict, interfere with or discriminate against an individual’s fundamental right to use or refuse contraception or to continue a pregnancy and give birth or to have an abortion,” while adding that “a fertilized egg, embryo or fetus does not have independent or derivative rights under the laws of the state.”

“Besides the all-out war against children in-utero, because it defines abortion as a right, the law could also be used to attempt to force medical professionals to commit or participate in abortions. There are zero conscience protections in the law,” reacted pro-life advocate Lila Rose on social media.

The signing of the bill comes just ahead of the highly anticipated U.S. Supreme Court decision on Dobbs v. Jackson Women’s Health Organization expected in June, which pro-lifers hope could reverse the 1973 Roe v. Wade precedent that legalized abortion countrywide.

While many Republican states such as Wyoming, Arizona, and Florida are seeking to ban or limit abortion following a possible reversal of Roe v. Wade, Democrats have also gone on the offensive, seeking to radically expand abortion.

AB 2223, for example, a gruesome pro-abortion bill proposed in California in February, could legalize infanticide for weeks, months, or even years after a child is born, an attorney with the Thomas More Society told LifeSiteNews.

Under AB 2223’s language, a “person shall not be subject to civil or criminal liability or penalty, or otherwise deprived of their rights, based on their actions or omissions with respect to their pregnancy or actual, potential, or alleged pregnancy outcome, including miscarriage, stillbirth, or abortion, or perinatal death.”

According to Thomas More Society special counsel Charles LiMandri, the proposal “exposes the false narrative that the abortion lobby has been peddling for over half a century:  That no one knows when life begins, and babies in their mothers’ wombs feel no pain. No sane person can deny that a newborn infant is a fully developed human being, one that is capable of feeling intense pain. Yet, by including ‘perinatal’ in its provisions, [the bill] would authorize the brutal murder of these infants even after they are born.”