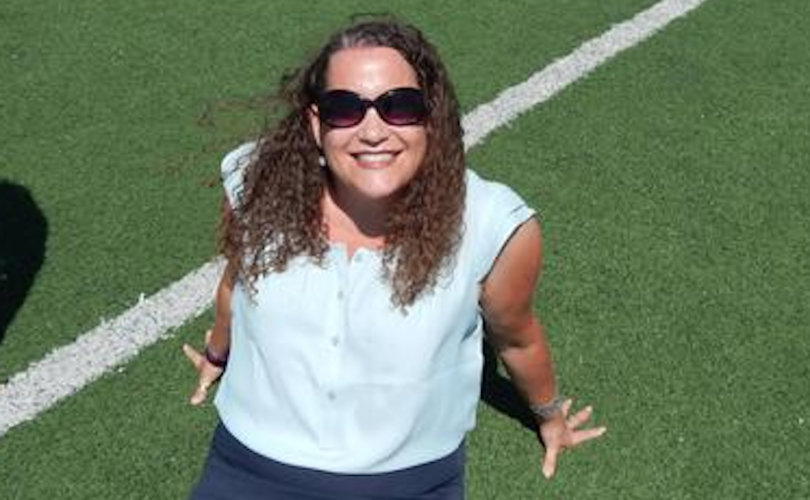 DOUGLAS COUNTY, Colorado, January 25, 2019 (LifeSiteNews) — A history teacher and labor union representative in the Douglas County School District is on leave after social media posts linked to her caused a furor.

A now-deleted Twitter account, attributed to teacher Michelle Grissom of Mountain Ridge Middle School, incorrectly identified a student depicted in a viral video of the January 18 encounter of Catholic students with a counter-protester at the March for Life in Washington D.C. The Twitter posts misidentified that student as a member of “Hitler Youth.”

Allegedly, Grissom wrote: “His name is Jay Jackson,” according to Twitter screenshots shared in the Douglas County School District Watch Facebook page. “His twitter account is closed to non followers so we won’t interfere with his training #HitlerYouth.”

The student identified in Grissom’s posts was not in Washington at the time of the incident.

Spokesperson Paula Hans of Douglas County School District released a statement via email on Wednesday to parents. According to the missive, “Michelle Grissom is currently on leave,” principal Shannon Clarke told parents. “Please understand that I am unable to share specific details, as this is a personnel matter.”

On Monday, the principal said, “I have been made aware of comments on social media that involve a member of the MRMS community,” adding, “We are addressing this situation, as appropriate.”

(1/3) @mountainridgems @dcsdk12 @MsGrissom on Saturday Jan 19 a teacher at ur school, Michelle Grissom posted a picture of my 17 yo son and a defamatory and untrue accusation regarding the incident that occurred in DC over the weekend..calling my son a #hitleryouth when I told

Grissom sits on the board of the Douglas County Federation, a labor union representing teachers in the school district. Membership on the board does not depend on whether the member is currently employed by the district. Grissom has since resigned from the board.

A WordPress blog demanded Grissom be fired “for her role in the attempted doxxing and mob persecution of an underage boy.” Doxxing is the frequently used practice of researching and sharing private or identifiable information about someone online.

Her my son was not in DC but playing basketball she demanded proof, proof sent she finally acquiesced and apologized but has refused to take down her post and my sons picture…I hope this is dealt with appropriately and swiftly …my son was harassed and bullied as a (2/3)

Dr. John Jackson, the father of the maligned boy, defended his son, 17-year-old Jay, in a series of weekend tweets. He cited The Cincinnati Enquirer’s coverage of a basketball game that his son played in on Saturday. Jackson also wrote that his son was bullied because of the accusation.

Dr. Jackson told 9NEWS that he wanted to have the offending online posts removed. “My intention was never for her to lose her job,” Jackson said. “It was only after multiple attempts to get her to remove the post did I feel it necessary to include her school and school district in the discussion in an attempt to get her to take down her post.”

He said that he feared that the misidentification of his son would have far-reaching consequences. “It wasn’t my son. He wasn’t even in D.C.,” Jackson said. “He was very shaken and upset. He feared that his future could be negatively impacted by having his name and picture associated with Hitler and the events in D.C.”

Jackson said he was disappointed that no one from the Colorado school district contacted him about the controversy. “We feel like this is a serious offense and would like at least some form of acknowledgment and apology.”

result of this teachers rush to judgement ..totally abhorrent behavior and inexcusable actions that need to have consequences…SHE IS TEACHING YOUR STUDENTS!!! (3/3) pic.twitter.com/1hjAMBagtr

The Jackson family has an offer for legal representation from Attorney Nicolle Martin of Colorado. She represented Masterpiece Cake baker Jack Phillips, whose case drew national attention when it went to the Supreme Court in 2018. Phillips had refused to make a wedding cake for a same-sex couple.

In reality, the boy that has been the focus of leftists’ ire is Nick Sandmann, a student at Covington Catholic High School who appeared in a viral edited video that seemingly showed students taunting counter-protester Nathan Phillips. That narrative has been debunked, and various media organizations and personalities have retracted their initial reports.

Sandmann issued a statement denying any racist intent on his part, and he has appeared in an NBC interview in the midst of widespread outrage over mis-reporting of the January 18 event by the media.