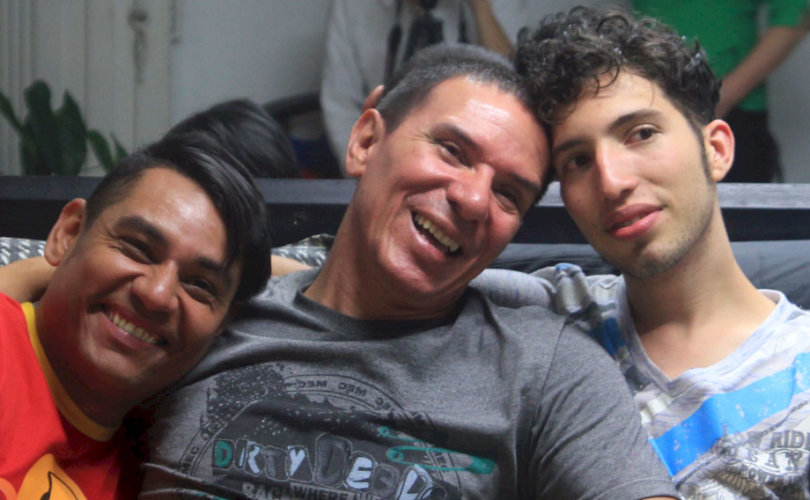 June 15, 2017 (LifeSiteNews.com) – A group of three homosexual men living in Medellín, Colombia have successfully registered their union with the federal government, according to local media reports.

The polyamorous union, which the three refer to as a “trieja” (or “thruple” – as opposed to “pareja” or “couple”) was registered by the city as a “Special Patrimonial Regime of a Thruple” (“Regimen Patrimonial Especial de Trieja”) according to a document provided by the group to the Colombian magazine Semana.

Proponents of homosexual “marriage” have long denied that a redefinition of the marital bond would lead to polygamy. However, defenders of the natural family as well as Supreme Court justices, have argued that the claim that people have a “right” to “marry” whomever they wish implies the legalization of such unions.

Although the union is not a “marriage” under Colombian law, it is a regime of inheritance rights that corresponds to what are called “unions of fact,” which correspond roughly to “common law marriage” in Anglophone countries. The men refer to themselves as “husbands” of one another.

Normally such “patrimonial regimes” are registered for couples who live together for long periods of time, and are now open to homosexual couples due to recent rulings of Colombia’s Constitutional Court. However, the registrar in Medellín allowed the group to register its patrimonial regime under a new heading, that of a “thruple,” a union of three.

“We wish to constitute an economic regime whose foundation is the relationship of a thruple that we currently have, because if we didn’t do so we would not be bringing it [the relationship] to fulfillment, and in any case various persons can associate with one another regardless of their skin color, sex, race, religious belief, ethnicity . . . which is not prohibited by international law, nor Colombian law,” the three state in their “Constitution of a Special Patrimonial Regime of a Thruple.” The document, contains the seal of the Republic of Colombia and is signed by a government notary.

The three homosexuals constituting the “thruple,” Manuel Bermúdez, Víctor Hugo Prada and Alejandro Rodríguez, say that a fourth man, Alex Esnéider Zabala, would have been registered with the group, but he died of stomach cancer before the registration was made. However, the group plans to have a public “marriage” ceremony in several months in which the deceased Zabala will be represented by a dummy with an audio recording of his voice made before his death.

The registration of this polyamorous “thruple” has been widely reported in Colombia and is being hailed by the media as a new milestone in the evolution of marriage in the country, whose Constitutional Court has already imposed a rigorous regime of homosexual “marriage” and other special rights for homosexuals on the nation’s institutions, including private Catholic schools.

Pro-family federal deputy Ángela Hernández denounced the registry of the group on her Facebook page,  lamenting that “the institution of the family has been given the death sentence, and we therefore we suffer attacks like this one on a daily basis.”

“The moral decadence to which we have arrived is very lamentable,” she added. “At this rate pedophilia and zoophilia will soon be normal . . . it’s time to raise our voices.”

A polygamous “family” living in Utah that became the subject of the reality TV show “Sister Wives,” filed suit against the government seeking to overturn Utah’s laws prohibiting bigamy in 2011, and cited the Supreme Court decision Lawrence v. Texas, which struck down anti-sodomy laws as “unconstitutional.” In 2013, a Federal district court ruled in their favor, but the decision was overturned on appeal. The “Sister Wives” group then appealed again, citing the 2015 Obergefell v. Hodges decision affirming homosexual “marriage” as a “right.”