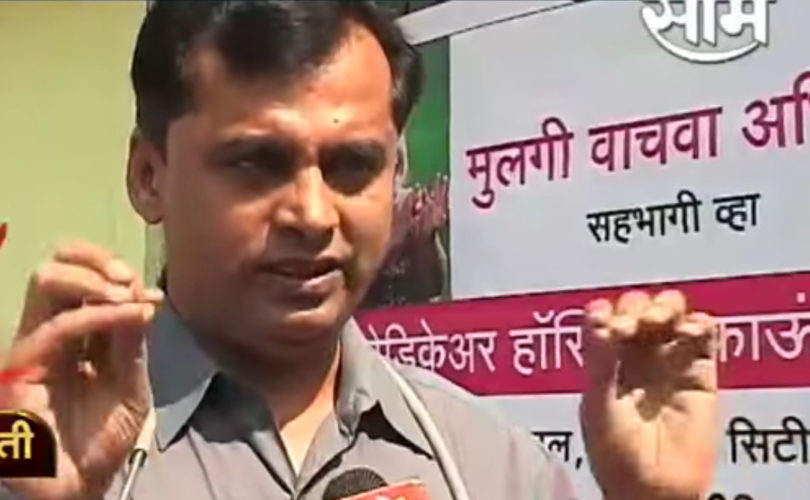 As a child, Dr. Ganesh Rakh wanted to be a wrestler. Now he wrestles with one of India's most destructive prejudices.

PUNE, India, February 16, 2016 (LifeSiteNews) – As a child, Dr. Ganesh Rakh wanted to be a wrestler. Now he wrestles with one of India's most destructive prejudices. The hospital he started in 2007 to serve the poor in the city of Pune, 60 miles southeast of Mumbai, delivers girl babies for free as part of his effort to reverse India's murderous – and growing – preference for male children.

“As a medical professional I have seen the torture that a mother undergoes when she comes to know that she has delivered a girl,” Dr. Bakh told reporters, “because regressive social norms are not only anti-women but are even anti-girl child.”

Often wrongly termed infanticide, the Indian preference for males has led to an estimated 12,700,000 sex-selective abortions of girls from 2000 to 2014, according to the pro-life Population Research Institute. The Virginia-based PRI's executive director, Stephen Mosher, says Indian gendercide is especially acute among the country's middle class, which allow 800 girls to be born to every 1,000 males (the overall ratio is 927:1,000).

“The lowest recorded number of girls is found in some high-caste areas urban areas of Punjab, where only 300 girls per 1,000 boys survive gestation,” Mosher stated. The widespread use of ultrasound examination to determine the gender of unborn babies is linked to this higher incidence among wealthier Indians, who prefer male children because females require a dowry from their parents when they marry, and because males are responsible for caring for their parents in their dotage.

Among the poor, the preference is expressed by a much higher death mortality rate for young girls than for boys. Dr. Bakh, who was recently the subject of a BBC India feature, reports that doctors see it all the time in the reaction of relatives who accompany expectant mothers to hospital to greet their children.

“It's not just me who has witnessed how relatives thronging the hospital on D[elivery]-Day hug each other when a boy is born and disappear when a girl is born,” he said in one interview. “Even other doctors see it every day in maternity wards of hospitals. The tension on the pregnant woman for nine months is so severe and acute that you can actually see it in the fluctuations of her haemoglobin and blood pressure.”

In 2012, Dr.Rakh decided to demonstrate his own more welcoming attitude to daughters (he has one) by delivering them for free. Since then his hospital has brought 432 female babies into the world. His staff were skeptical when he floated the idea. But he persevered and has proven that earnings from other procedures can pay for the free service. Now his staff bake cakes for relatives to celebrate each new daughter.

With publicity, many of his classmates from medical school imitated him, and gradually the movement grew to the point where some 3,000 doctors all over the state of Maharashtra, where Pune is located, have signed up either to offer some kind of discount or to refuse to do tests to determine gender. Rakh has also started The Campaign to Save the Girl Child and gives talks in villages promoting it.

Dr. Rakh’s campaign won the approval of Dr. Mitu Khurana, who has fought the Indian legal system for several years to have her husband prosecuted for allegedly conspiring to have an illegal ultrasound done on her whilst pregnant, then pressuring her to abort her twin daughters and even assaulting her to induce a miscarriage.

“The problem of daughter hatred is so deeply ingrained in the Indian psychology that whatever maximum can be done should be done,” she told LifeSiteNews. “He is doing what he can do on his part to remove the bias against daughters and is to be appreciated.”