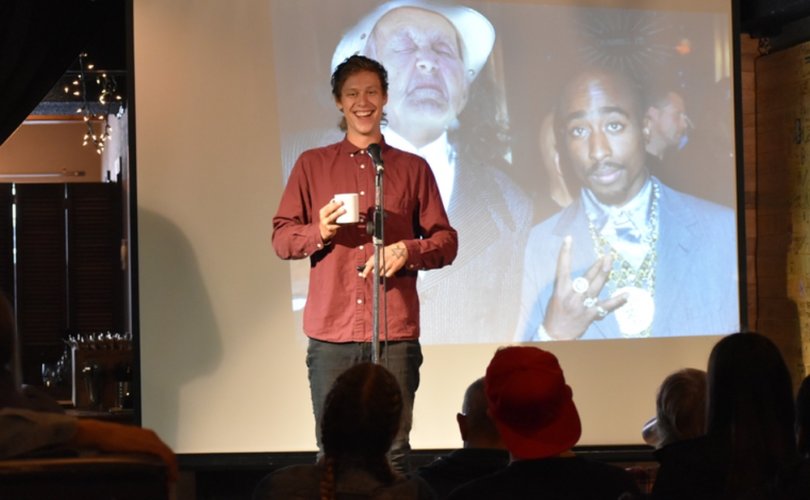 CUMBERLAND, British Columbia, November 1, 2018 (LifeSiteNews) – A Canadian comedian has created a one-man act that tells the story of his 96-year-old grandmother being happily euthanized with the full blessing of the state. Critics say the show promotes the normalization of doctors legally killing their patients.

By exploiting his own grandmother's death under Canada's legalized form of euthanasia, called medical assistance in dying (MAID), Dion Arnold has already gotten a four-star rating from the Edmonton Fringe Festival for his show titled “My Grandmother's M.A.I.D.”

Vue Weekly reportedly described it as “a heartwarming and heartbreaking story. Exuberant and shameless.”

On the Eventbrite website where tickets are being sold for an upcoming performance, the act is being described as a “cathartic, comedic elegy.”

Pro-lifers, though, warn that this is yet just another example of the entertainment industry trying to sell the idea that doctors killing patients is a good thing.

Canada introduced its so-called medical assistance in dying euthanasia program, about two years ago. Since then, the trend has been towards more and more Canadians asking doctors to legally help end their lives.

Arnold's act is capitalizing on these changing social mores.

“My Grandmother's M.A.I.D. tells the comedic tale of the last days of someone ready to leave,” states the Eventbrite website. “The story of a happily forever after-life. From the perspective of a comedian losing his righteously funny grandmother, to her own choice at the age of 96.”

In mid-November, the act is to be performed for two nights in the Comox Valley on Vancouver Island. Then, Arnold will be taking his act to New Zealand and Australia. On that continent, the euthanasia debate is raging with even prominent neurosurgeon and former head of the Australian Medical Association Brian Owler calling for a repeal of the 1997 ban on Australia’s territories ability to legalise euthanasia.

Alex Schadenberg, executive director of the Euthanasia Prevention Coalition, says Arnold's act is part of a growing push by the entertainment industry to convince people throughout the world that euthanasia is an acceptable and even normal practice.

“They're trying to change cultural views and our attitudes … and, because it's still new, they're using the opportunity to win awards as it's still considered avant-garde,” said Schadenberg in an interview Wednesday.

The danger in normalizing euthanasia in popular culture is that this can then lead to more people opting to end their lives prematurely in this way.

In effect, they are “encouraging this,” said Schadenberg. “Someone else will say, 'She had such a 'beautiful' death and I want to go this way.'”

Arnold disagrees. He claims he is not normalizing euthanasia. But he does extol his grandmother's choice to end her life.

“These are still rare cases,” said Arnold in an interview. “My grandmother was 96 years old and it was just too much for her … She had had a brain hemorrhage. She was hospitalized, in bed.

“We have this stigma about death that you have to wait, you have to wait, even if life is incredibly painful,” he said. “It was so clear, her change in attitude. From being sick and in pain to being overjoyed and at peace because she had a choice … For some people, it is the best choice.”

According to Schadenberg, this show about euthanasia is just latest of a growing number of cultural products pushing the idea of euthanasia.

In 2015, the Australian film Last Cab to Darwin told the story of a cab driver who wants to be euthanized. The following year, an American studio came out with Youth In Oregon, another comedy about a man on a quest to be euthanized.

Both those two movies – and Arnold's one-man act – feature elderly people looking to end their lives. But Schadenberg sees this as just the beginning of a movement that will increasingly portray euthanasia in popular culture as a suitable choice, even for children.

“Breaking taboos. That's what (they're) up to. And, in a few years, it'll be a lot more extreme,” warns Schadenberg. “It'll be about someone who has emotional distress who gets euthanized or it'll be about a 14-year-old who will be portrayed as suffering.”

The executive director of the Euthanasia Prevention Coalition has only one recommendation for concerned Canadians when it comes to these movies and other shows.

“Don't give this writer or author what he's looking for which is to be seen as a great writer,” said Schadenberg. “Don't go to see this.”

When suicide is made easier, life gets harder for all of us