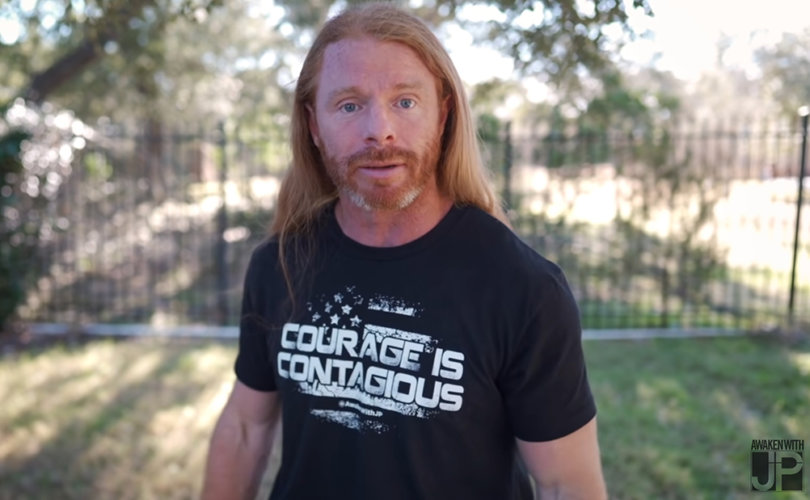 (LifeSiteNews)  — A comedian known for thought-provoking satire delivered a powerful call on Monday to apply the lessons of the Milgram experiment on obedience and courage to today’s COVID mandates.

Popular YouTuber J.P. Sears, who has for the past two years devoted most of his skits to highlighting the absurdity of “authoritarian” COVID edicts and liberal and “woke” ideology, challenged listeners in a more serious recent video to disobey morally unjust orders imposed in the name of COVID.

He called to mind the many current-day global laws that “a lot of people seem pretty eager” to comply with: “Authorities telling us who can eat where, based on whether or not you’re carrying your papers; kids forced to wear masks in schools; people losing their jobs because they refuse to comply with authoritarian mandates.”

“How far would you go to follow orders? How much would you compromise of your own free will? Would you sacrifice what you knew was right, ignore your principles, your instinct, your heart and gut? What if someone in a position of authority demanded that you do something that you knew in your heart was wrong?” asked Sears.

Sears recalled that many “terrible, unconscionable” acts have been perpetrated throughout history, such as the mass murder of Jews under the Nazi regime, “all by people just following orders.”

“It’s easy to say, well, I wouldn’t do that. I would resist,” noted Sears. “But would you disobey a morally unjust order even if it meant personal sacrifice?”

Sears then described the “astonishing” Milgram Experiments on obedience to authority conducted in the 1960s that were designed to explain the “psychology of genocide.”

During this experiment, the unsuspecting subjects — mostly men from a wide range of occupations — were commanded to administer what they thought were increasing levels of electric shock to someone strapped into an “electric chair.” The researcher in a lab coat — perceived as an authority figure — told them to administer shocks for incorrect answers on a memory test.

Unbeknown to the real subjects, the person in the electric chair was in on the experiment and was not actually experiencing electric shock but was acting on a script when they eventually cried out in “pain” and even protested to leave the chair. “As the number of incorrect answers rose, so did the severity of the shocks,” noted Sears.

Sears pointed out that “an astonishing 65 percent of subjects obeyed” the firm command to continue the experiment to the point of “administering” a huge, deadly 450-volt shock “simply because the lab coat-wearing researcher insisted on it,” even after audible protests and cries from the “victim.”

“The experiment’s designer, Stanley Milgram, a Yale psychologist, concluded when authority was pitted against the subject’s strongest moral imperatives against hurting others, and with a subject’s ears ringing with the screams of the victims, authority won more often than not,” said Sears.

According to Sears, this study is relevant for all of us in this moment of history because we ourselves are the subjects of an experiment in obedience.

“In this real world study of obedience, mask mandates, masked children, vax mandates and enforced segregation imposed by those in real or figurative lab coats are the new shock treatment,” he continued.

“And they’re studying to see how far they can go and how long we’ll obey.”

Like the subjects of the Milgram Experiment who were instructed to administer shocks gradually, today we are made to adapt to authoritarian measures gradually, said Sears: “Tyranny progresses slowly, inch by inch, edict by edict, mandate by mandate, each one chipping away at liberty and freedom until nothing of what we formally took for granted remains.”

These experiments and history then support the declaration by 18th-century statesman Edmund Burke that “The only thing necessary for the triumph of evil is for good men to do nothing.”

“Our willingness to disobey authorities when it makes moral sense to do so, to stay true to our sense of right and wrong, is the most powerful weapon we have,” said Sears.

“It’s our moral responsibility and sacred duty to disobey, and to do so now.”

For all of its tragedy, Sears pointed out that the Milgram Experiment contains a source of inspiration for us.

Beyond the encouragement that 35 percent of subjects refused to comply with the experiment’s demands of cruelty, “the best part” of the experiment is its proof that courageous acts embolden others.

“When a subject refused to obey and others witnessed it, the willingness of those others to continue administering the shocks plummeted from 65 percent to just 10 percent.” What does this prove? Courage is contagious,” said Sears.

“When the dust settles, which side of history do you want to be on?”

JP Sears currently has over two million subscribers on YouTube. He has been known for years for using deadpan, sarcastic delivery to shine a light on irrational and damaging patterns of thought and behavior, or societal conventions.