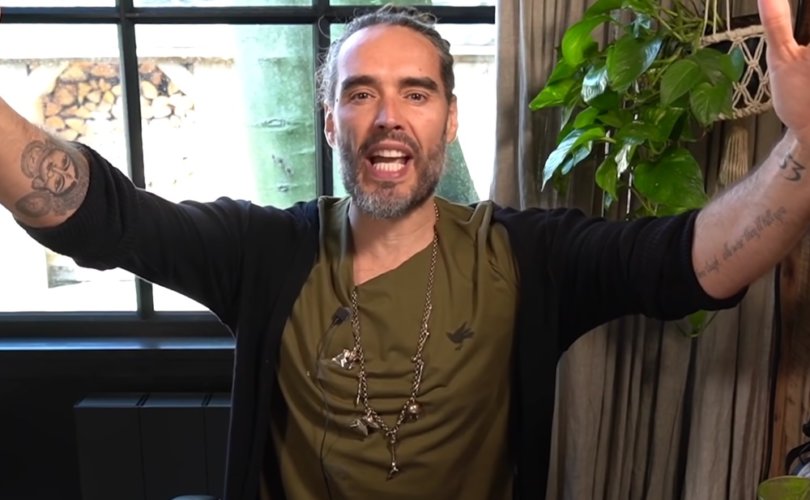 (LifeSiteNews) – British comedian Russell Brand called out Canadian Prime Minister Justin Trudeau as a hypocrite, saying he “lost his authority to comment” on the issue of “democracy,” considering his recent crackdown against the trucker Freedom Convoy.

“What I feel is that Justin Trudeau lost his authority to comment on issues like this when he treated the truckers in the manner they did when they introduced emergency powers and then did not revoke them. That gave them the ability to freeze people’s bank accounts. That is an assault on democracy,” Brand said in a video posted to his YouTube page on March 12, with the title, “How Did We Miss This?”

Brand was commenting on how Trudeau, speaking to Canada’s Ukrainian community amid the Russia-Ukraine crisis, recent claimed that there has been a “slippage” in democracy.

“There’s no question that Russia’s actions in Ukraine are deplorable,” said Brand. “But what right do you [Trudeau] have to offer that critique when you are no real friend of democracy when it doesn’t suit you?”

Brand went onto note how Trudeau’s taking down of the trucker Freedom Convoy with the use of the Emergences Act (EA) reveals his true colors.

“I feel like I saw bits of authoritarianism in Canada when truckers had pepper spray used against them, when bank accounts were frozen, when GoFundMe sites were shut down,” noted Brand.

“What about the beginning of the trucker protest when he outright said, ‘They’re racists, they’re misogynists’? Is that not misinformation turning people against the values and the principles of democracies that are so strong?”

Trudeau enacted the EA in February, claiming it was needed to deal with the Freedom Convoy protesters, who were demanding an end to all COVID mandates. Trudeau revoked the EA on February 23.

“The crushing of those protests was not done democratically,” Brand noted. “The Emergencies Act can only be invoked when a situation seriously threatens the ability of the government of Canada to preserve the sovereignty, security, and territorial integrity of Canada, and when the situation cannot be effectively dealt with under any other law of Canada.”

Brand said that the conflict in Ukraine and the “crushing of protests in Canada are two separate things,” but noted that Trudeau speaking out against the war, whilst just before he was arresting truckers, does not make sense.

“This war is a humanitarian disaster. It is wrong. What I’m saying is that if the reason that this war is wrong or one of the reasons is because it is against democratic principles, then you must ensure that where it is possible, where there is no militarized state opposing your ability to be democratic. You should be democratic,” said Brand.

“Otherwise, you do not have the same argument. You can criticize Russia for many, many reasons. You can condemn the actions of Russia, quite rightly, for many reasons. What you can’t do is claim to be an exemplar of democracy if whenever you get the opportunity to be tyrannical,” you do just that.

The Freedom Convoy’s main leader Tamara Lich was met with a hero’s welcome upon returning home to Medicine Hat, Alberta, this Saturday.

Lich had just spent almost three weeks in jail for opposing the COVID edicts of Trudeau before getting bail.

Although currently out on bail, Lich’s conditions for release ban her from speaking out against the Canadian government’s COVID rules on social media and online and attending any COVID protests.

Lich’s legal counsel, the Justice Centre for Constitutional Freedoms (JCCF), said Lich was held in jail on bail because she was a “political prisoner” of Trudeau.