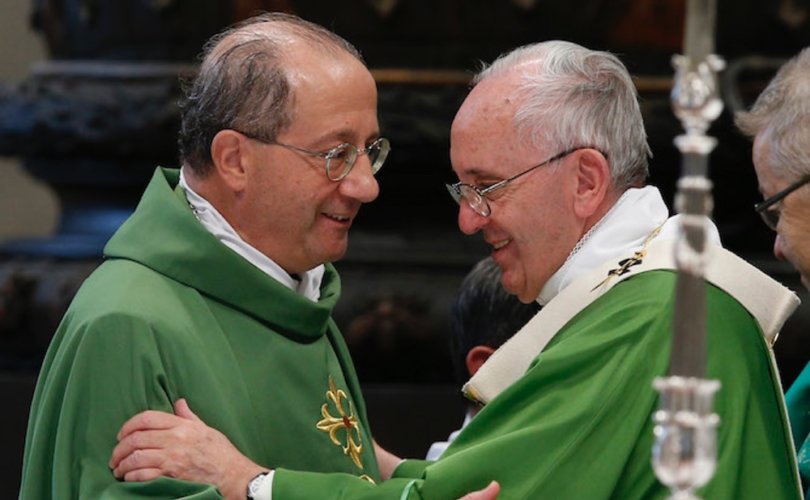 Note: In above photo, Archbishop Bruno Forte and Pope Francis exchange the sign of peace during the Family Synod's closing Mass in St. Peter's Basilica Oct. 25, 2015.

ITALY, March 16, 2017 (LifeSiteNews) — Italian Archbishop Bruno Forte said that it is loving “as God does” for priests to give Holy Communion to the civilly-divorced-and-remarried who are living in adultery.

“The accompanying path culminates in communion for divorced and remarried that is a sign of obedience to God's mercy,” he said in a March 10 interview with RomaSette.

The Archbishop of Chieti-Vasto, Italy, was appointed Special Secretary to the 2014 Synod on the Family by Francis. He was credited with writing the synod’s controversial mid-term report which suggested that the Church emphasize the “positive” aspects of actions it considers to be mortally sinful, such as adultery, premarital cohabitation, and homosexual relations.

In the interview, Forte defended Francis’ Apostolic Exhortation Amoris Laetitia, the Pope’s reflections after the conclusion of the Family Synod. He suggested that the four cardinals who raised a series of questions (dubia) to Francis, asking him if his teaching was in continuity with the faith, should by that very act have doubt cast on themselves.

“The doubts that were raised present doubts on who has raised them,” he said.

READ: Who are these four cardinals who wrote the ‘dubia’ to the Pope?

“At the center of Amoris Laetitia there is the crisis of the real family. The message is that, despite the wounds and the failures, it is worth it to bet on the family. And then what do we do? Love as God does. And how do we show this attention for those who are wounded? With pardon, which is the great strength of love,” he added.

Forte said the proposals in Amoris can be summarized as welcoming, accompanying, discerning, and integrating.

Last May the Archbishop revealed how Pope Francis told him during the Synod on the Family to avoid speaking “plainly” about the question of admitting remarried divorcees to Holy Communion, because doing so would make a “terrible mess.”

Cardinal Gerhard Muller, the head of the Vatican’s Congregation for the Doctrine of the Faith, issued a strong rebuke earlier this year against those who use Amoris to justify Communion for those in adulterous unions.

“Adultery is always a mortal sin and the bishops who create confusion about this must study the doctrine of the Church,” he said at that time.

The Catholic Church teaches that the faithful may receive Holy Communion if they have the proper disposition, namely that they be in the state of grace (free from mortal sin). The Church follows the teaching of St. Paul in this matter where he states that the one who “eats the bread or drinks the cup of the Lord in an unworthy manner will be guilty of profaning the body and blood of the Lord.”

St. Paul teaches that the one who receives Communion unworthily “eats and drinks judgment upon himself.”