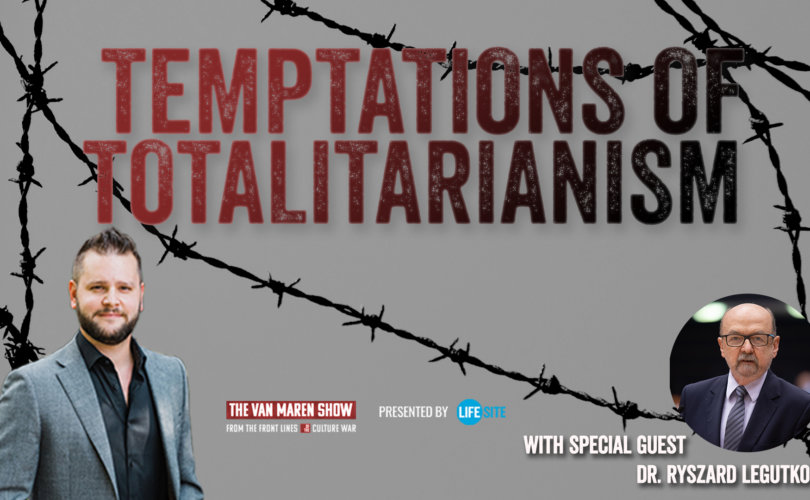 November 18, 2020 (LifeSiteNews) — In this week’s episode of The Van Maren Show, Jonathon Van Maren speaks with Dr. Ryszard Legutko, a philosopher, politician, and professor from Krakow, Poland, to discuss Legutko’s fight against communism and liberal democracy.

Legutko starts off by describing his own family experiences living under a communist regime as a child and young man. He also highlights how that personal exposure led him to become an ardent anti-communist, and part of the Solidarity movement and resistance to the Marxist regime in Poland.

Legutko also indicates paradoxical similarities in liberal democracy, which, after the collapse of the Soviet Union, widely took the systemic place of communism throughout various Eastern European countries.

“They dictate to us what we have to do, they want to switch off our institutions, and impose the political will on us, and they call it democracy,” Legutko says about current relations between conservative nations in Eastern Europe and the European Union.

Moreover, he outlines how conservative governments such as Poland and Hungary are joining to survive and preserve their national identity, in the midst of an assault from “not only the European institutions, but also the media, culture, and NGOs.”

Professor Legutko also says Donald Trump as president of the United States “weakened the political monopoly which we have in the entire Western world.” On the other hand, Legutko worries that a Biden presidency will “close ranks with the European Union, and this hegemony will be even more brutal.”

Lastly, Legutko gives his frank opinion on various errors within the European Union and the West. He states that the E.U. has “become more and more arrogant, they overspend, they have become infatuated with silly ideologies … and they are overspending on the Green Deal, which is a costly extravaganza.”

Legutko further describes a similarity between the E.U. and a communist system. “Communism is a system that courageously fights the difficulties it itself has created. So I think that’s exactly what the E.U. has been doing: creates problems and then desperately seeks the solution, and the solutions make things even worse.”